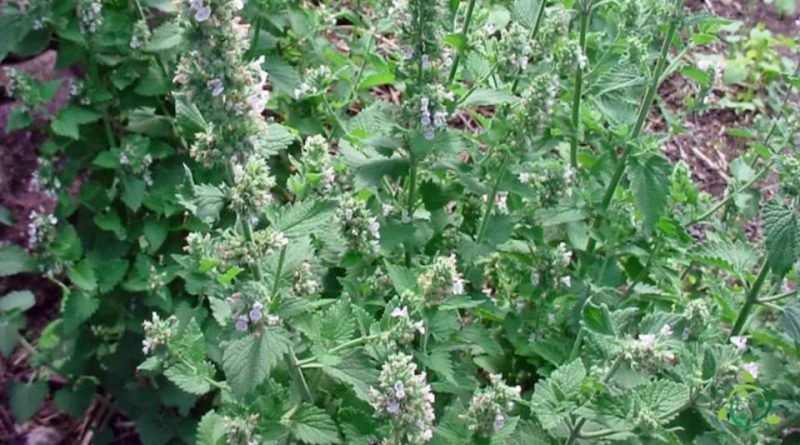 The catnip (Nepeta cataria L., 1753) is a herbaceous plant of the Lamiaceae family.
This herb is very popular with cats who feed on it and have particular reactions such as jumping, hunting cats or imaginary animals and with an effect that lasts about 5-15 minutes, after which, once the effect is over, the cat begins to wash.
From the bibliographic data, however, the plant does not cause harmful effects on the cat as no side effects or permanent damage have ever been described in cats that have been exposed to Nepeta cataria, even for prolonged periods of time.

Cultivation –
As far as cultivation is concerned, it is a very rustic plant, easy to cultivate and that grows in various types of soil, as long as they are well drained, in a sunny or partial shade.
As far as temperature is concerned, this plant tolerates the cold well and tolerates the harsh winter temperatures even slightly below -15 ° C.
The plant can also be used to create borders or in rock gardens and can also be grown in pots.
In pot cultivation it can be placed on window sills, balconies or terraces and also acts as an excellent natural repellent for insects, in particular for mosquitoes.
For this cultivation, a pot must be chosen that can contain the plant in width and with a depth of at least 50 cm. With these dimensions it is possible to have a regular development of the roots and of the aerial part.
The soil must be a mixture of sand and peat in the ratio of 1: 2 and should be watered about every 10 days, in the hottest period from April to October, absolutely avoiding water stagnation in the saucer.
To carry out the transplant, you must then choose a larger container than the previous one using new soil rich in organic matter, when the roots come out of the water drainage holes.
In open ground cultivation, Nepeta cataria should be placed at a distance of 30 cm from each other in order to ensure the necessary space for the growth of the root and stems.
In the open ground, Nepeta cataria can be grown in partial shade but to have abundant blooms it is best to grow it in full sun.

Remember that in the open ground, even if it is a plant that adapts to all types of soil, it prefers calcareous, loose and above all well-drained ones. In too compact or clayey soils, it cannot develop the root system well.
As for irrigation in the open field, the plants tolerate drought so they should be watered occasionally from spring to autumn.
The gattàia must be fertilized in the late winter period when the plant wakes up; for this operation well-ripened organic fertilizers such as earthworm humus or mature manure must be chosen.
Let’s see now the pruning.
Nepeta cataria should be pruned during the flowering period; in this phenological phase it is necessary to eliminate the withered flowers, in summer the stems that are too long must be shortened, in autumn all the dry twigs are pruned, leaving them about 10 centimeters from the ground.
Finally, as regards the multiplication, the Nepeta cataria reproduces either by seed and by division of the tufts, in spring.
Sowing is carried out directly in the open ground by distributing the seeds, collected in June, on well-worked soil. The seeds are then covered with 1-2 cm of soil mixed with sand.
It is advisable to sprinkle water while waiting for the buds to appear.
In the multiplication by division of the tufts this must be done in the period of March-April.
A well-sharpened knife is used and the rhizome is divided into portions that have secondary or adventitious roots well developed and with at least one shoot.
The pieces of rhizome must be transplanted, each with their small portion of the stem in individual jars that go and watered to facilitate rooting. After rooting, the new plants are transferred to larger pots or to the ground.
Another multiplication technique is that by stem cuttings.
This must be done in July when vigorous and healthy twigs are detached from the plant and rooted in a box containing sandy earth or perlite.
These are then watered until new leaflets appear, once rooted the cuttings are transferred to single pots until the moment of final planting. It is advisable to protect them from direct sunlight until they root.