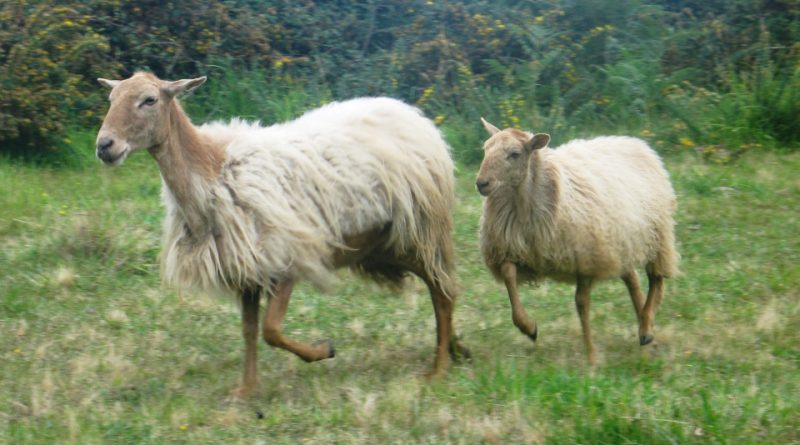 The Sasi ardia or Xaxi ardia is a sheep breed (Ovis aries Linnaeus, 1758) native to the Basque Country, with a main aptitude for milk production.

Geographic and Area Distribution –
The sasi ardia is a breed traditionally bred in the communes of Durango in the Basque Country, between Gipuzkoa and Navarre and which is bred partly in Spain and partly in France. These sheep live in complete freedom in the forest areas where the foliage prevents human passage and limits that of the sheep.

Origins and History –
The Sasi ardia is a breed traditionally bred in the Basque Country and its name derives from the Basque language and means ‘sheep that live among brambles and bushes’. This breed has a particular behavior as it has a low group instinct and tends to live isolated, with habits typical of the deer rather than the sheep.
It is a hardy breed that comes from the Pyrenean sheep breed family with drooping wool.
Due to its archaic characteristics, the Sasi ardia is considered the progenitor of the Blackhead Manech and Redhead Manech breeds, bred to improve their milk production.
There is evidence of the existence of these sheep since ancient times. The project for the recovery of the breed dates back to 1997 and the official recognition of the breed is also brought back to the same year. At that time the sasi ardia breeders associations were also born in the Basque Country and Gipuzkoa and a little later also in Navarre. It is an endangered breed, included among the indigenous breeds to be protected.
The numbers are currently 1,200 animals in France and 1,500 in Spain. The herds are raised in purity.

Morphology –
The sasi ardia is a small breed with a straight, slightly stocky profile and a spotted or red-brown head.
Horns are typically absent or aborted, but in the ram they can exist within the limit of a spiral.
The sheep is generally white in color, with blond or red spots especially on the head and limbs. Sometimes the spots cover the entire fleece of the animal.
The sheep is 60-65cm tall and weighs 35-40kg. The ram measures 65-70 cm for 40-50 kg.
The fleece is hanging, dense and long.

Productive attitude –
The Sasi ardia is a rustic breed that preferably leads a solitary, rustic life and which is raised in the natural state. It lives in complete freedom in the forest areas where the foliage prevents the human passage and limits that of the sheep.
It is a breed with a typical aptitude for milk production while there are fewer contributions and uses of meat and wool.