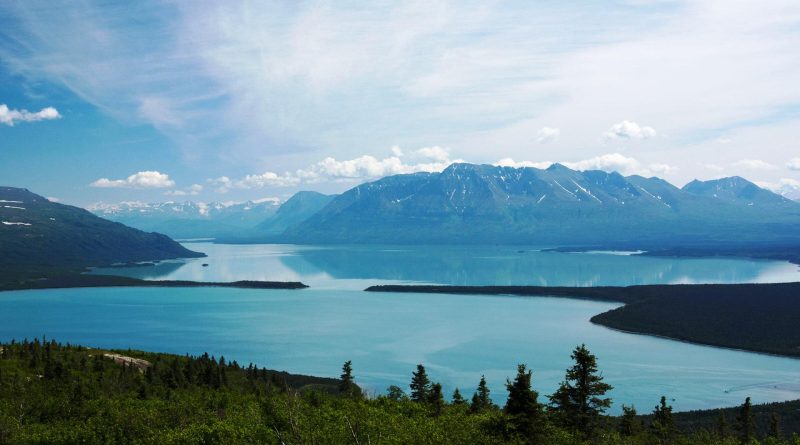 Katmai National Park and Preserve, whose WDPA Code is: 1009 is a United States National Park, located in Alaska, with a land area of: 19,122 km².
The managing body is the National Park Service.
Among the main attractions is the valley of the Ten Thousand Fumes. Most of the region is desert. The name of the park is in reference to Mount Katmai, a stratovolcano.
Katmai National Park and Preserve was established on December 2, 1980. It is located at the mouth of the Alaska Peninsula, opposite Kodiak Island, located in nearby King Salmon, approximately 470 kilometers southwest of Anchorage. Originally, on September 24, 1918, the region was designated as a national monument to protect the area around the great volcanic eruption of Novarupta in 1912, which gave birth to the valley of the Ten Thousand Fumes.
However, the Katmai area was declared a national monument in 1918 to preserve the living scenery of its catastrophic volcanic eruption of 1912, in particular the Valley of the Ten Thousand Fumes. The past few years have seen most of the geothermal features cool down, but brown bear protection has become an equally compelling charge for Katmai. To protect this magnificent animal and its diverse habitat, the borders were expanded over the years until 1980 when the area was designated a national park and reserve.

Geography –
The Park is not connected to any city by road, it is also known for its hiking, fishing, rafting and kayaking possibilities and is most commonly accessible for such activities, via seaplane. It is located on the northeastern coast of the Alaska Peninsula, as an internal offshoot of the Aleutian Peninsula, opposite the island of Kodiak.

Geology –
One of the great attractions of Katmai National Park and Preserve is located near Mount Katmai (the park includes 15 of Alaska’s 70 active volcanoes), in the area where the Novarupta Volcano erupted catastrophically in 1912. It is estimated that it was the largest eruption. violent of the twentieth century, 10 times stronger than that of Mount St. Helens in 1980.
The destruction caused by that eruption then went unnoticed because the area was deserted, remote and far from civilization. It originated the complex system of “fumaroles” of the “Ten Thousand Smokes Valley”, that is the Valley of the Ten Thousand Fumes, where it is possible to see the terrible, now suggestive effects of that pyroclastic eruption that transformed the valley into a spectral area, almost lunar. A specific visit to this attraction is also more than recommended.
The ash layer, which in some points reaches up to 300 meters, remained hot for decades and all the water in the valley erupted steam fumaroles (hence the name “Ten Thousand Fumes”). Today the ashes have cooled down and the fumaroles are extinct. A curious aspect is that for this reason that in 1966 NASA had astronauts trained here in view of the moon landing. 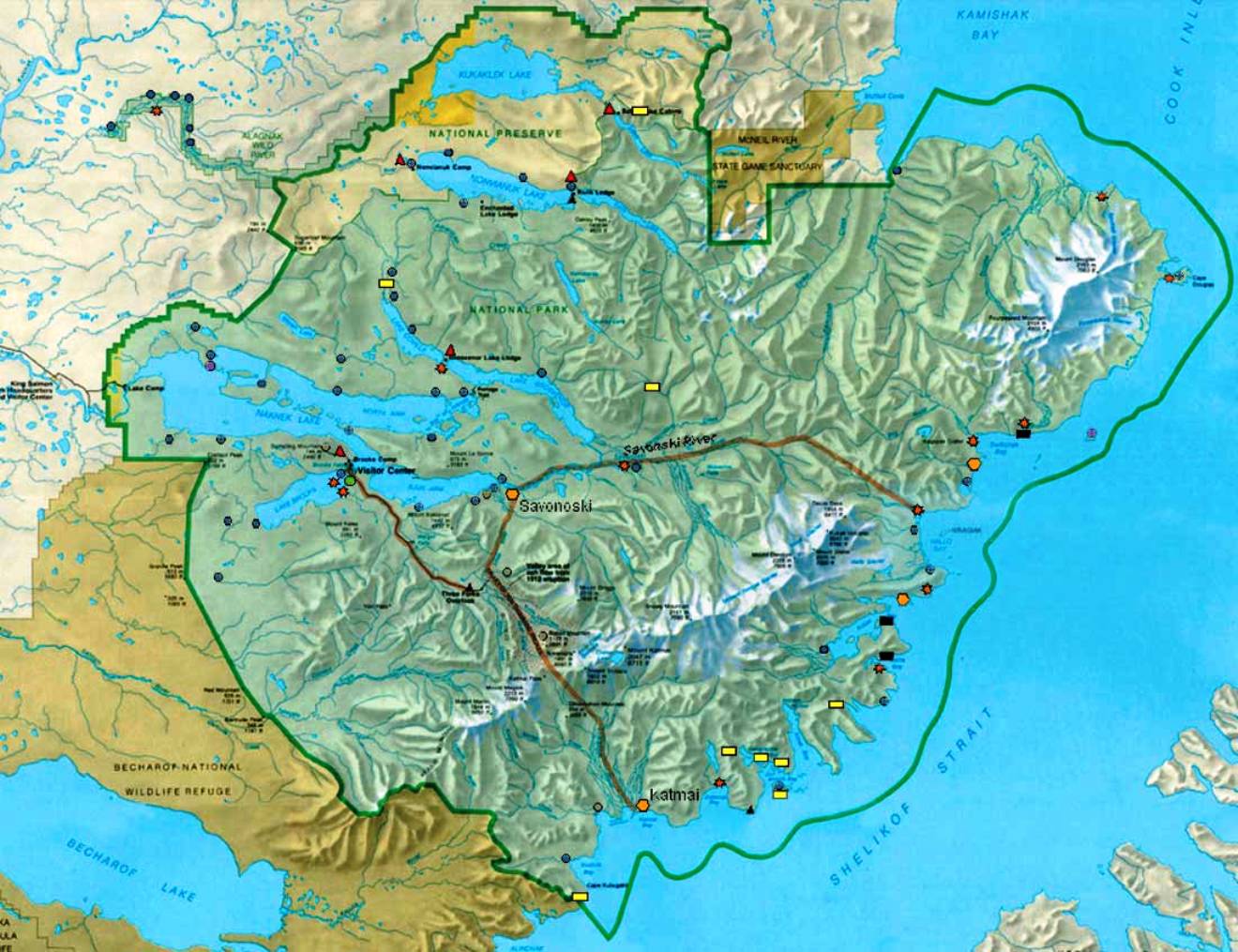 Flora –
Katmai National Park and Preserve was established in 1918 to preserve features associated with one of the most powerful volcanic eruptions ever recorded. However, subsequent expansions and change of status in Katmai have not focused on geological activity but rather on the importance of wildlife.
Katmai National Park and Preserve is one of Alaska’s most pristine parks, but invasive plants pose a serious threat to the park’s diverse ecosystems. Invasive plants are characterized as plants introduced by humans, intentionally or unintentionally, into areas where they did not exist before and have the ability to establish and overcome native species. Katmai has relatively few invasive plants in the park, and the exotic plant management team aims to control spread and minimize the negative impacts that invasive species can have on native plant communities. As a visitor, you can do your part to prevent the spread of invasive plants by thoroughly cleaning your gear and boots between uses.
As for the flora, this is supported by a wide variety of habitats.
The list below is far from exhaustive, but here’s a look at some of the wildflowers Katmai has to offer.
– Fireweed (Chamerion angustifolium): Fireweed is an extremely common perennial in Katmai. It is often the first plant to colonize recently disturbed sites, especially following fires. The flowers are typically present between June and August.
– Northern Geranium (Geranium erianthum): Also known as wild geranium or woolly geranium, this purple-flowered perennial is common in Katmai forests, tundra and meadows. The flowers can generally be viewed between June and August.
– Common yarrow (Achillea millefolium): The common yarrow has clusters of small white flowers and its stems and leaves are extremely fragrant when crushed. This plant has been used in traditional medicine for centuries, and the young leaves have served as a food source. Yarrow can be seen in bloom from June to September in the park.
– Kamchatka Lily (Fritillaria camschatcensis): Also commonly known as the Chocolate Lily, this beautiful deep brownish-purple flower can be seen in Katmai wetlands between May and July. The bulb of this plant has historically been eaten by the natives as a winter food source. Blooms can be seen from June to August.
– Monks (Aconitum delphinifolium): These unique purple flowers can be found in the park from June to late August. Monkshood is the most poisonous plant native to North America.
– Women’s Hooded Braids (Spiranthes romanzoffiana): Katmai is home to numerous orchids, including women’s hooded braids. This orchid can be found in bloom from June to August in some parts of the park.
– Alaskan Indian brush (Castilleja unalaschcensis): The Alaskan Indian brush is a unique wildflower because it is hemiparasitic, meaning it grows and feeds from the roots of neighboring plants. These plants can be seen in bloom from June to August in the park.
– Bridgehead Iris (Iris setosa): The beautiful beachhead iris is a relatively common wildflower in Katmai. This plant can be seen in bloom from June to August.
– Lupine Nootka (Lupinus nootkatensis): This member of the pea family is a widespread wildflower throughout much of Alaska. Lupine can be seen in bloom between June and September in Katmai.

Fauna –
Its territory is rich in a wide variety of wildlife including caribou, moose, bear, wolves and red fox, as well as waterfowl such as swans, ducks and loons. Sea Lions Sea otters and whales of many species, including the great Blue Whale, are visible along the park’s coastline.
A large part of the American brown bear population, also called grizzly, thrives and is estimated to live here among the abundant wildlife. Of great proportions is also the presence of another protagonist of the American North West Fauna, the red salmon, called “sockeye”, an anglicization of “Suk-Kegh”, red fish in the Salish language, whose flesh is a vivid red rich in fat, they are the main food of the great Grizzlies.
For this reason, one of the primary purposes of Katmai National Park and Preserve, under the legislation, is to protect habitats and populations of fish and wildlife, including, but not limited to, high concentrations of brown bears and their areas of den, and keep the watersheds and aquatic habitat vital for spawning of the red salmon intact.