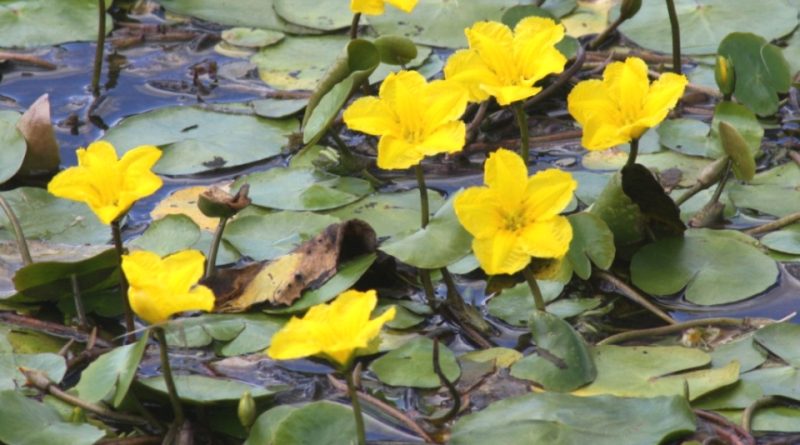 Etymology –
The term Nymphoides comes from Nýmphaea (from the Greek Νυμφἅς Nymphas Nymph, a minor deity of Greek mythology, guardian and animator of particular natural environments, depicted as a beautiful young girl) water lily and from the Greek εἷδος eídos semblance: similar to a water lily.
The specific epithet peltata comes from light crescent-shaped pélta shield (from the Greek πέλτη pélte small shield): due to the presence of organs having the appearance of a small shield.

Geographic Distribution and Habitat –
Nymphoides peltata is a perennial aquatic plant rooted with floating leaves native to East Asia and the Mediterranean.
Outside its original range it has spread to North America, Ireland, Sweden, and New Zealand.
In many of the regions where N. peltata has spread it is considered a weed because it can form dense carpets that shade other native aquatic plant species, thus reducing biodiversity and also inhibiting their reproduction.
Its spread was essentially due to its use as an ornamental plant as early as the nineteenth century.
In Italy, its presence is limited to the Po Valley and a few wetlands in Tuscany, Lazio and Sardinia.
Its habitat is that of shallow, stagnant or light current waters. 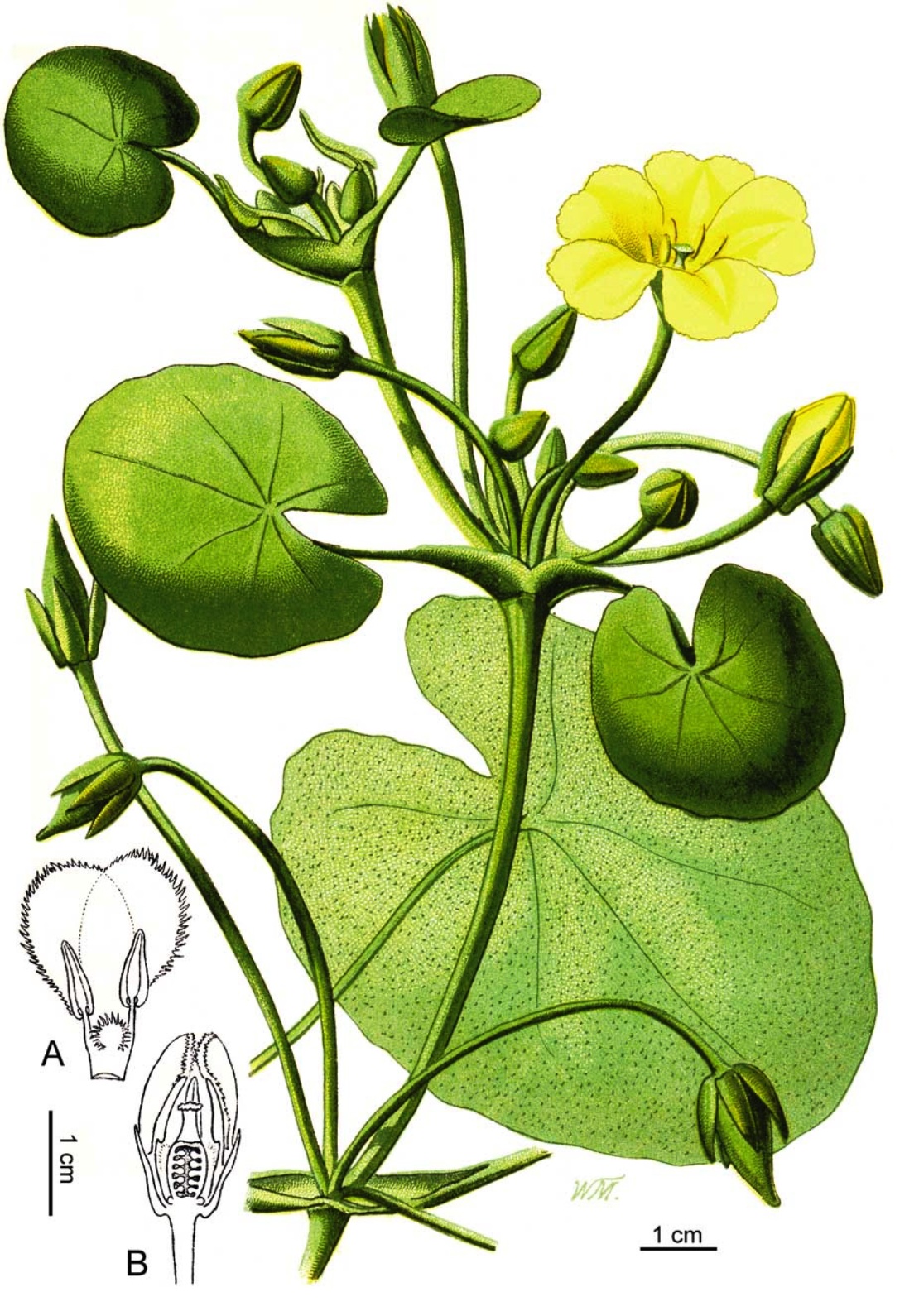 Description –
The Fringed water lily is a rooting hydrophytic aquatic plant, fixed to the substrate by a long and thin rhizome, from which stems from a few centimeters to almost 2 meters long.
The leaves are heart-shaped, up to 12 cm in diameter, and float on the surface of the water; for their appearance they recall those of water lilies, but the similarity is the result of mere evolutionary convergence.
The flowers are supported by peduncles up to 10 cm long and originate from the leaf axil; they are yellow in color, with a corolla composed of 5 petals with a finely fringed edge. Flowering is from June to August – September.
The fruit is a capsule of 18-22 (30) x 8-10 (12) mm, ellipsoid, acute, longer than the calyx, glabrous or with some dispersed papillae. This has a free dehiscence of the seeds of 6 x 3 mm, with ciliated margins, which facilitate their dispersion, yellowish.

Cultivation –
Nymphoides peltata is a typical plant of natural lakes that generates new seedlings from submerged stolons that can develop floating on water even for several meters.
This aquatic plant grows easily in shallow water in very rich but not acidic soils and prefers a sunny location.
The ideal substrate is clay.
Propagation can take place by seed which must be sown as soon as it is ripe in a cold greenhouse in pots immersed under 25 mm of water. The home transplant must be carried out in late spring but after the plant has developed a couple of years.
The seed is collected by wrapping the developing seed head in a muslin bag to prevent it from being lost. It should be harvested 10 days after it sinks below the surface of the soil or as soon as it reappears.
Propagation by division can also be carried out in the period of May. Each serving must have at least one eye. This should be immersed in pots in shallow water until it has stabilized.

Customs and Traditions –
Fringed water lily is a plant that was harvested, especially in the past, directly in its natural state for local use as food and medicine.
The flowers have a delicate, almond-like scent.
For edible use, the leaves and stems are used that are cooked like a vegetable.
The inside of the stem is also eaten and is highly prized.
The leaves, however, are not very palatable.
The flower buds are cooked like an aromatic plant.
Nymphoides peltata is also used in the medicinal field.
It is an anthelmintic, diuretic, febrifuge, galactogogue, cutaneous plant. Fresh leaves are used in the treatment of periodic headaches.
It is also used in the treatment of burns, fevers, ulcers, snakebites and swellings.
The plant contains rutin, but no details are given on the quantity.
From an ecological point of view, it is reported that Nymphoides peltata spreads more aggressively in eutrophic lakes with neutral to alkaline water, but the species has also been found in oligotrophic lakes and acid ponds.
It is most frequently found in water depths of 1 to 1.5m, but can survive in water depths of 0.3 to 3.0 meters.
As far as its diffusion is concerned, as well as by gamic or vegetative way, the adhesion to amphibious animals and boats are two other possible mechanisms of dispersion. Conversely, seeds that are eaten by waterfowl or fish are fully digested and are no longer viable.