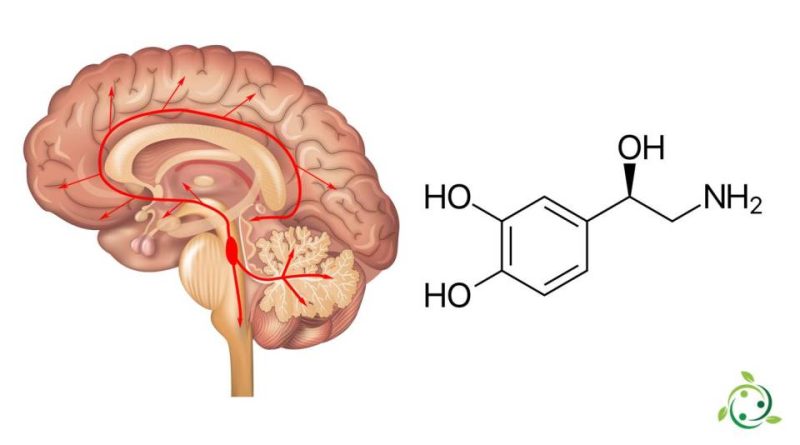 Noradrenaline or norepinephrine, whose term in the official IUPAC nomenclature is: 4- (2-amino-1R-hydroxyethyl) benzen-1,2-diol, also known by the alternative name of: 2-amino-1- (3,4 -dihydroxyphenyl) ethan-1R-ol is a neurotransmitter with a brute or molecular formula: C8H11NO3.
Noradrenaline differs from adrenaline in the absence of a methyl linked to the amino group.
Norepinephrine is a catecholamine (i.e. an amine whose structure resembles that of catechol) and a phenethylamine.
In nature there is a stereoisomer which is L – (-) – (R) -norepinephrine.
Norepinephrine is released from chromaffin cells as a hormone in the blood; this molecule is also a neurotransmitter in the nervous system, where it is released by noradrenergic neurons during synaptic transmission.
As a stress hormone, it involves parts of the brain where attention and reaction controls reside. Together with epinephrine, it causes the fight-or-flight response, activating the sympathetic nervous system to increase heart rate, release energy in the form of glucose from glycogen, and increase muscle tone.
Norepinephrine release occurs when a series of physiological changes are triggered by an event. This is caused by the activation of an area, which in humans is located in the brain stem called the locus ceruleus. This nucleus is at the origin of most of the actions of noradrenaline in the human brain. Activated neurons send signals in both directions from the locus ceruleus along different pathways to various parts, including the cerebral cortex, limbic system, and medulla.
Norepinephrine is therefore a hormone synthesized in the internal (medullary) portion of the adrenal gland and, as mentioned, also a neurotransmitter produced by the central and peripheral nervous system. Indeed, most of the circulating norepinephrine comes precisely from the nerve endings, while adrenal is mainly synthesized at the adrenal level (90% of the cells of the adrenal medulla are specialized in its synthesis).
When this molecule is secreted and released into the circulation, it accelerates the heart rate, increases the release of glucose from energy reserves and increases blood flow to the skeletal muscles.

Biochemistry –
Norepinephrine is synthesized from tyrosine: it starts with the oxidation of the amino acid into dihydroxyphenylalanine (L-DOPA), followed by decarboxylation in the neurotransmitter dopamine and β-oxidation into noradrenaline.

Features –
Norepinephrine has effects that are mainly concentrated on the cardiovascular level. It therefore has a known ability to increase heart rate and contractility, raising blood pressure due to cutaneous, genital, splacnic and renal arteriolar vasoconstriction. Furthermore, among the other actions of noradrenaline, we recall the stimulating effect on the contraction of the sphincters, on the dilation of the pupil and on sweating, while at the metabolic level it promotes glycogenolysis, gluconeogenesis and lipolysis, decreasing the secretion of insulin and increasing that of glucagon.

Receptors –
To carry out its biological effects, norepinephrine must interact with specific receptors, the so-called adrenergic receptors. There are essentially two types, α and Β, with various subtypes for each class; the different expression of these receptors and of the relative isoforms influences the adrenergic activities at the tissue level.

Therapeutic use –
Norepinephrine has the ability to increase the release of fatty acids from adipose deposits, through the activation of beta-3-receptors, and to activate their metabolism at the peripheral tissue level, with a stimulus on thermogenesis; due to this function, noradrenaline could be used for therapeutic purposes to promote weight loss. In reality this practice is not carried out since the risks would outweigh the benefits; noradrenaline is instead used in emergency therapy in the face of episodes of severe hypotension, septic shock and cardiogenic shock. Many slimming supplements, such as caffeine, the now banned ephedrine, synephrine and the drugs that contain them (guarana, maté, coffee, tea, cola, ephedra, bitter orange), trace the effects of norepinephrine freeing it from neuronal vesicles and / or by binding to its receptors and stimulating them.

History –
In the early 20th century, Walter Cannon, who popularized the idea of ​​an adrenal sympathetic system that prepared the body for fight and flight, and his colleague Arturo Rosenblueth developed a theory of two sympatins, the E (excitatory) and sympatin I (inhibitor), responsible for these actions. Belgian pharmacologist Zénon Bacq as well as Canadian and American pharmacologists between 1934 and 1938 suggested that noradrenaline could be a sympathetic transmitter. In 1939, Hermann Blaschko and Peter Holtz independently identified the biosynthetic mechanism of norepinephrine in the vertebrate body, leading to 1945 when Ulf von Euler published the first of a series of articles establishing the role of norepinephrine as a neurotransmitter. He demonstrated the presence of norepinephrine in the tissues and brain innervated by the sympathetic system, and provided evidence that it is the sympathetic of Cannon and Rosenblueth. Instead, Stanley Peart was the first to demonstrate the release of norepinephrine after sympathetic nerve stimulation.