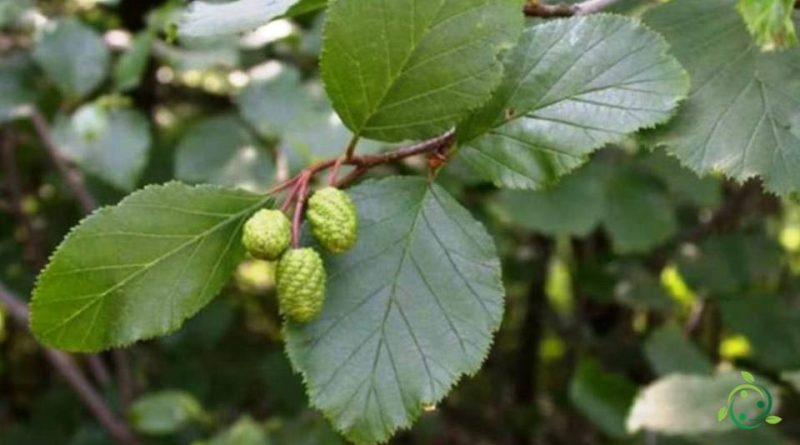 The grey alder (Alnus incana (L.) Moench) is a deciduous tree of the Betulaceae family, native to central and north-eastern Europe.
It is a common species along the banks of waterways and in Italy it is found in the Alps up to 1500 meters and on the northern Apennines.
Its reproductive structures are male flowers in groups of three in catkins; the female ones in “pignette” arranged at 3-5 in racemes. The fruit resembles a small 1 cm pine cone with woody scales containing winged achenes.

Cultivation –
Alnus incana is a species that should be grown in the presence of a lot of light, it also likes fairly cool climates, it grows well in the north and central Italy up to an altitude of 1500 meters. It is a cold resistant plant.
From a pedological point of view, it prefers gravelly and drained soils, with particular proximity to water. It also adapts to poor, humid and calcareous soils; moreover it grows well even in very poor soils thanks to its very high fertilizing capacity of the soil, obtained in symbiosis with the Frankia bacterium, capable of processing large quantities of nitrogen compounds.
As for irrigation, this plant needs a lot of water; in fact, it grows well in the vicinity of marshes and streams. If grown in the garden it is advisable to water regularly.
Furthermore, the white alder, as mentioned above, does not require fertilization and can even be useful to increase the fertility of the soil thanks to its nitrogen-fixing abilities.
The plant does not need any special pruning, but it is always good to remove dead or diseased branches.
As for the plant, if you start from a plant, just dig a small hole that can accommodate the root system without the need to add organic fertilizers. However, it should be remembered that the plant generally propagates by seed; moreover in winter it can reproduce by suckers and in summer by grafting.

Uses –
Grey alder can be grown as an ornamental plant, associated with species such as cornus and willows. It is also often used to consolidate landslide slopes and to improve soil fertility. The gems are useful in case of inflammation of the female genital system; moreover, this plant is an excellent remineralizing remedy for strengthening the bone system of postmenopausal women.
The wood of this plant, in addition to not being a good fuel, is also not a widely used building material. Its best feature is its resistance to water; for this reason in the past it was used in the construction of bridges, walkways and small stilts.
The rind, rich in tannin, provides a gray dye. It is a soil-enhancing plant as the roots are rich in tubercles that harbor nitrogen-fixing bacteria. Thanks also to the extension of the root system, it is used for the consolidation of embankments.
Finally, it should be remembered that Alnus incana is often used for the reforestation of the hills of alluvial lands and for the stabilization of slopes and escarpments.