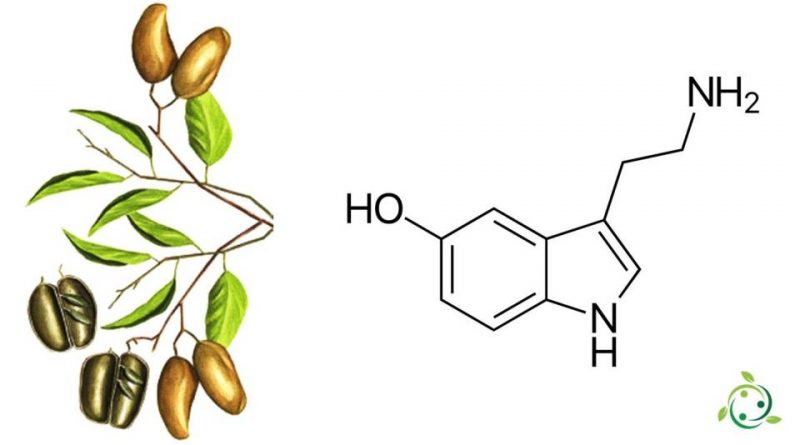 Serotonin, whose term in the official IUPAC nomenclature is: 3- (2-aminoethyl) -1H-indole-5-ol, also known by the alternative name of: 5-HT or 5-hydroxytryptamine, is a tryptamine with brute formula or molecular: C10H12N2O.
Serotonin is synthesized from the amino acid tryptophan (5-HTP), which in animals is mostly produced by serotonergic neurons in the central nervous system and in enterochromaffin cells in the gastrointestinal tract, where it participates in numerous biological functions.
However, serotonin also has an origin of a vegetable nature or in other organisms; we also find it in fungi, plants and in the poison of some insects (as well as on the thorns of some plants) for its ability to cause pain at the injection site. It is also produced by some microorganisms such as amoebas.
Serotonin was first isolated in 1935 by Vittorio Erspamer in Pavia and was initially classified as a polyphenol; two years later, following studies on the cutaneous glands of discoglossus and salivary glands of octopuses, it was then renamed enteramine, only to be definitively called serotonin in 1948.
In addition, some plants, due to their high tryptophan content, favor the raising of serotonin levels in the central nervous system, the best known is certainly the African bean (Griffonia simplicifolia (DC.) Baill.). It is a legume native to the tropical areas of Central West Africa. Its very high tryptophan content makes it particularly suitable as a remedy to counteract low levels of serotonin, associated with depressive disorders and anxious states.
Another plant capable of stimulating the serotonin content is spirulina (Arthrospira platensis (Nordstedt) Gomont), a blue alga that lives in the brackish waters of tropical and subtropical areas. This seaweed contains a very high percentage of tryptophan, an amino acid precursor of serotonin, which in turn is a precursor of melatonin.
As for the biochemical role of serotonin in the human body, this substance performs some fundamental physiological functions:
– Gastrointestinal tract. 5-HT determines the increase in intestinal motility, partly due to a direct effect on smooth muscle cells and partly due to an indirect excitatory effect on enteric neurons. 5-HT also stimulates fluid secretion; it also causes nausea and vomiting by stimulating the smooth muscle and sensory nerves in the stomach. The peristaltic reflex, evoked by the increase in pressure in a segment of the intestine, is mediated, at least in part, by the secretion of serotonin by the enterochromaffin cells, in response to the mechanical stimulus. Chromaffin cells also respond to vagal stimulation by causing 5-HT secretion.

– Blood vessels. It usually has a contractile action on large vessels, both arteries and veins. Activation of 5-HT1D receptors gives rise to vasoconstriction of the large intracranial vessels, the dilation of which contributes to migraine.
– Platelets. 5-HT causes platelet aggregation via 5-HT2A receptors, and platelets that collect in vessels release more 5-HT. If the endothelium is intact, the release of 5-HT from the attached platelets causes vasodilation, which allows the blood flow to flow; if it is damaged, 5-HT causes constriction and further obstructs blood flow.
– Nerve endings. 5-HT stimulates nociceptive sensory nerve endings, primarily via 5-HT3 receptors. If injected into the skin it causes pain.
– Central nervous system. 5-HT plays a fundamental role in the central nervous system, mainly of a regulatory type where it excites some neurons and inhibits others; its synthesis and release is finely managed both by nerve stimuli and by regulatory systems, such as the presynaptic autoinhibitory system which inhibits the release of neurotransmitters from nerve endings.
Furthermore, it should be remembered that serotonin is a substance that participates in bone metabolism, in the development and repair of organs such as the liver and heart, in the regulation of body temperature, heart and respiratory rhythm.
Furthermore, serotonin is a non-competitive antagonist of testosterone and estradiol because it elevates cortisol and elevates prolactin levels, resulting in inhibition of the gonadotropin-releasing factor. Serotonin is the natural brake of the ejaculation reflex and a low level of this neurotransmitter is the main constitutional cause of premature ejaculation.