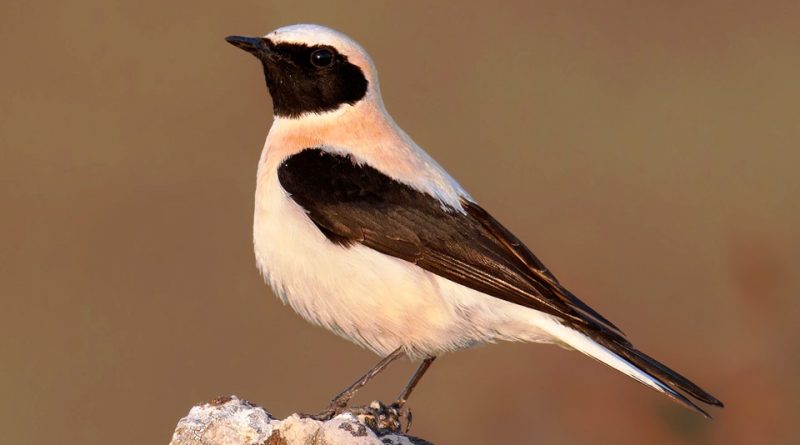 The western black-eared wheatear (Oenanthe hispanica Linnaeus, 1758) is a bird belonging to the Muscicapidae family.

Geographic Distribution and Habitat –
The western black-eared wheatear is a bird with a distribution that goes from the countries of the Mediterranean and Eurasian areas: Spain and Portugal, southern areas of Italy and France, northern Africa, the central regions of the Arabian peninsula and the Middle East; Balkan Peninsula, Turkey, territories surrounding the Caspian Sea, southwestern Kazakhstan, Palestine, Iran and Iraq.
It is a migratory bird that nests in the Mediterranean area and winters south of the Sahara. In Italy it commonly nests in Calabria in the months of May and June, sporadically in other regions.
Its habitat is that of open or semi-open environments in the Mediterranean and steppe climatic zones; it preferably occupies environments at low and medium-low altitudes, usually no higher than 1,000 meters above sea level, with some exceptions in the easternmost portion of the area.

Description –
The Oenanthe hispanica is a small passerine bird, with a length ranging from 13 to 14.5 cm ending in a long tail.
It is recognized by the plumage of a bright yellow ocher color (the colors can vary from black and white in the male to brown and shaded ocher in the female), in contrast with a black mask on the face that goes down to the throat and which is the prerogative of the male. .
The two sexes then have black wings, a white tail dotted with dark spots, interrupted only by a white point at the end.

Biology –
The nun reproduces from the beginning of May onwards, with one or, sometimes, two broods.
This species builds a nest with blades of grass and moss, upholstered inside with finer material and hair, in the crevices of rocks and ground or on the ground sheltered by low bushes or a boulder.
It lays 4-5 eggs which are incubated by the female for about 2 weeks. The chicks are nests and are raised by both parents; at the age of 11-12 days they are able to fly and leave the nest.

Ecological Role –
The Oenanthe hispanica is a bird that feeds on insects and other invertebrates that make up the main diet of the species, although it does not despise berries and seeds. Chicks prefer larvae, caterpillars and beetles instead.
The species in Europe is considered to be in an unfavorable conservation status, in decline and vulnerable due to environmental transformations and unfavorable climatic conditions in the African wintering areas.
This species is contemplated in international agreements for its conservation and management (Bonn Convention, annex II); moreover it is strictly protected (Berne Convention, annex II); protected (National Law 11 February 1992, n.157).