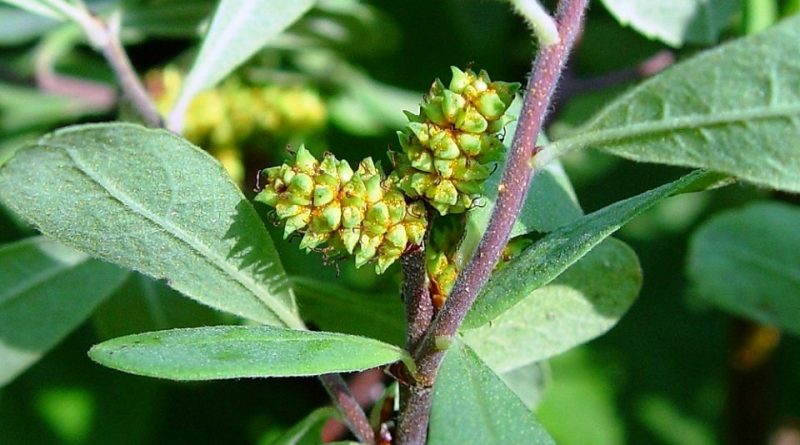 Etymology –
The term Myrica comes from the Greek μΰρω mýro dripping, dripping.
The specific gale epithet is of uncertain origin.

Geographic Distribution and Habitat –
Myrica gale is a plant native to northern and western Europe and parts of northern North America. It is distributed in all parts of the Northern Hemisphere, including: Japan, North Korea, Russia, mainland Europe, the British Isles, Canada and the United States.
Its natural habitat is that of wet swamps and moors in acid soils, but occasionally there are plants in calcareous peat bogs. 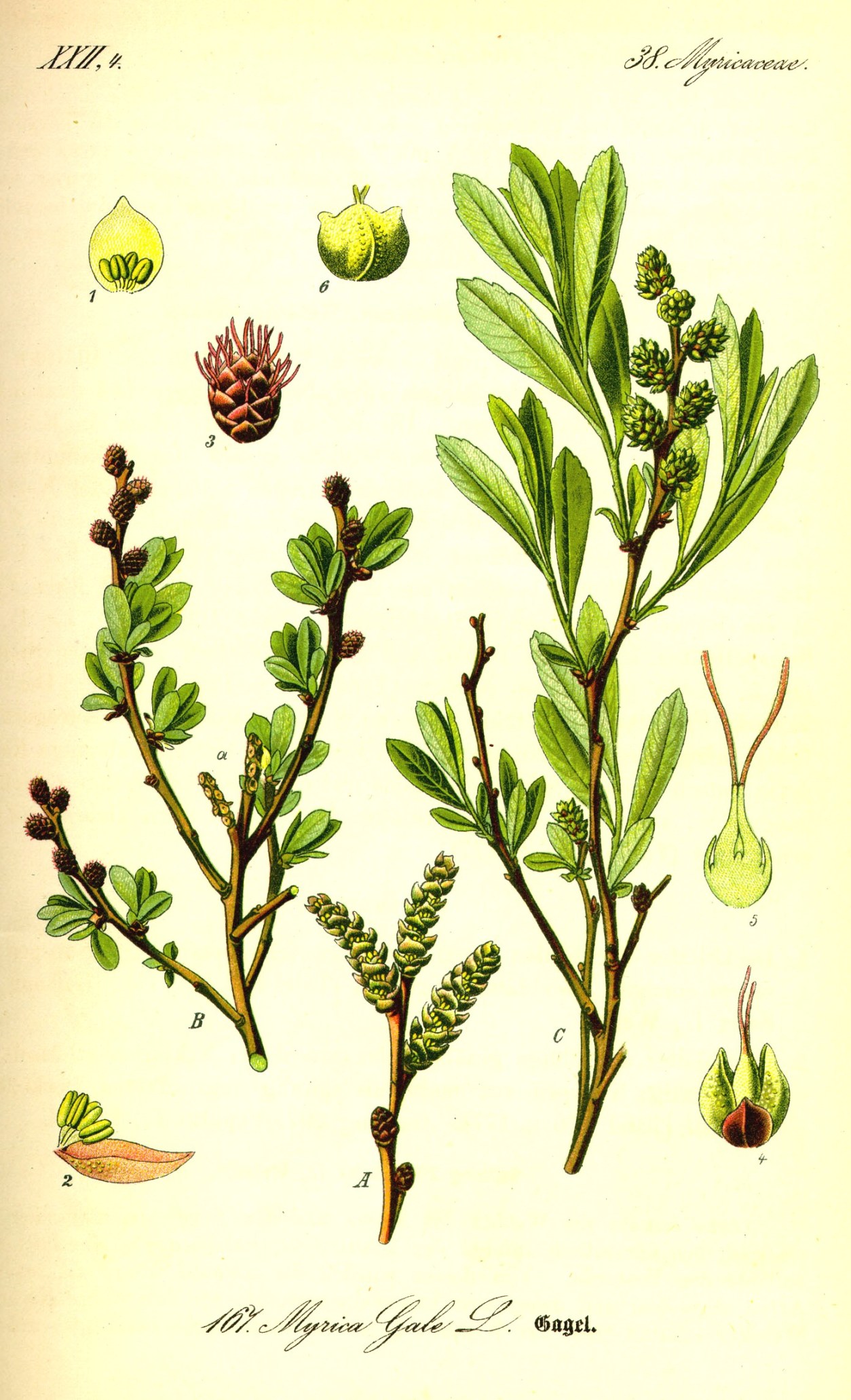 Description –
Myrica gale is a shrubby plant and generally reaches heights ranging from one meter to two meters in height.
The leaves are deciduous, dark green in color and varying in length from 2 to 5 cm; they are arranged in a spiral and have a lanceolate-obovate shape with a wider and rounder end than the base, moreover they have a finely serrated edge in the upper half.
It is a dioecious plant with individuals bearing only female flowers and individuals with only male flowers.
Flowering occurs in spring in conjunction with the appearance of the new leaflets generally extends from the period of March to May. The flowers grouped in catkins initially have a yellow color that darkens over time to become brownish in color.
The fruit is spherical, 1.5-2.5 cm in diameter, with a warty surface and with a variable reddish color with a pulp similar to the color of the surface, or a little lighter.
In the center is a single seed, usually elongated-pointed about half the size of the whole fruit.

Cultivation –
Swamp myrtle is a plant that, in its natural habitat, grows in soils poor in nitrogen, typically in peatlands with an acid pH; it can be found on the edge of lakes or near swamps. The roots of this plant are able to independently synthesize the amount of nitrogen it needs.
The plant prefers full sun exposure, however it is possible to obtain good results even with half shade exposure.
Multiplication can be done from seed by division or by cutting. The cultivation from seed must be carried out in autumn, the seeds must be covered with a thin layer of earth and left in constant humidity. The semi-woody cuttings can be taken in the period of July-August, the woody cuttings instead in the period of November-December. The division by root suckers can be carried out in the winter period and planted directly.

Customs and Traditions –
Myrica gale is a plant known for some time in the places of origin where it is collected in its natural state for local use as food, medicine and source of materials, also thanks to the emission of a particular fragrance that manages to keep many types of annoying insects away. and for this reason it is also used in perfumery; in ancient times it was even used as an ingredient for making beer.
In Scotland and the UK, it has traditionally been used to ward off some midges and is marketed as an insect repellent and an ingredient in some soaps.
Queen Victoria was given a sprig of this plant which she planted on the Isle of Wight. Her daughter used part of the plant that grew in her bridal bouquet, starting a royal tradition.
In northwestern Europe (Germany, Belgium and the Netherlands), it was widely used in a blend, called gruit, as a flavoring for beer from the Middle Ages to the 16th century, but fell into disuse after hops displaced herbs. of the gruit for political and economic reasons.
In modern times, some brewers have revisited this historic technique and in Denmark and Sweden the plant is commonly used to make home-made schnapps.
In some cultures native to eastern Canada, the plant has been used as a traditional remedy for stomach aches, fever, bronchial ailments, and liver problems.
All parts of the plant are pleasantly aromatic and the leaves can be dried to make tea but contain a poisonous aromatic oil, so some caution is advised in their use.
Both the fruits and the dried leaves can be used to make a dressing.
The fruits and leaves are used both fresh and dried to flavor soups, stews, etc. ..
The leaves are aromatic, astringent, emmenagogic and stomachic, as well as being abortive. In fact the plant has been listed as abortive and therefore should not be consumed by women who are or may be pregnant.
Since ancient times the plant has been used to treat depression thanks to its ability to induce good mood and calm stress. It has also been used in poultices to heal wounds, suggesting it may contain strong antibacterial agents that could possibly be developed into new antibiotics.
Among other uses, it should be noted that a waxy coating present on the fruits and leaves is extracted from Myrica gale by blanching the fruits with boiling water and soaking them for a few minutes, the wax floats on the surface and is then skimmed. The fruit is then boiled in water to extract the wax from the pulp and once again the wax is skimmed. It is then filtered through a muslin cloth and can be used to make aromatic candles.
These candles give off a delicious smell when burned but unfortunately this species does not produce enough wax to make it commercially viable.
In addition, a yellow dye is obtained from the tips of the stem.
A yellow dye is also obtained from the seeds.
The bark contains tannin and can be harvested in the fall and used as a yellow dye.
The plant, as mentioned, repels moths and insects in general and the fragrant leaves are used for this action.
A very strong decoction obtained from the leaves can be used as a pesticide to kill the external parasites of the body.
A fragrant essential oil is obtained from the fruits.
From an ecological point of view it is a good food plant for the caterpillars of many butterfly species.

Preparation Method –
All parts of the plant that are aromatic are used from Myrica gale.
The fruits and leaves are used both fresh and dried to flavor soups, stews, etc. ..
The leaves are pleasantly aromatic and can be dried to make tea; please note, however, that they contain a poisonous aromatic oil so a certain caution is advised in their use.
The dried fruits and leaves of this plant are used to make a condiment.