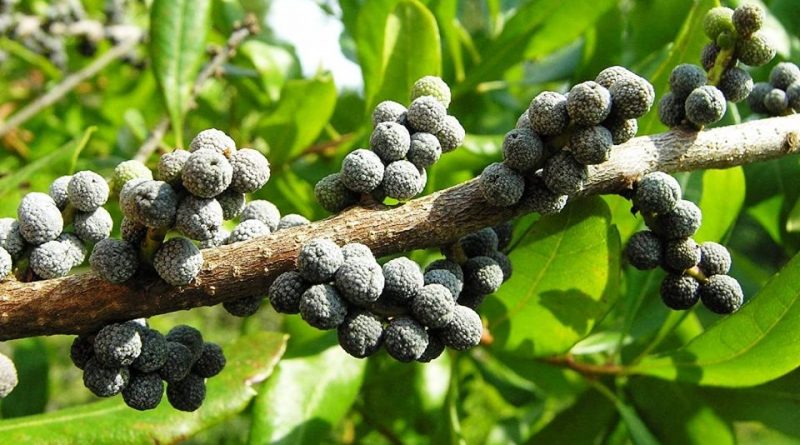 Geographic Distribution and Habitat –
The southern wax myrtle is a plant native to the eastern coasts of the United States and present in eastern North America, New Jersey and south through Central America to British Honduras and Puerto Rico.
The plant was also introduced in Europe where it is grown.
Its habitat is that of the forests of the tropics on sandy soils near swamps and marshes but it is adaptable to different habitats both in arid soils and in coniferous and mixed deciduous forests up to 1,000 m. s.l.m .. 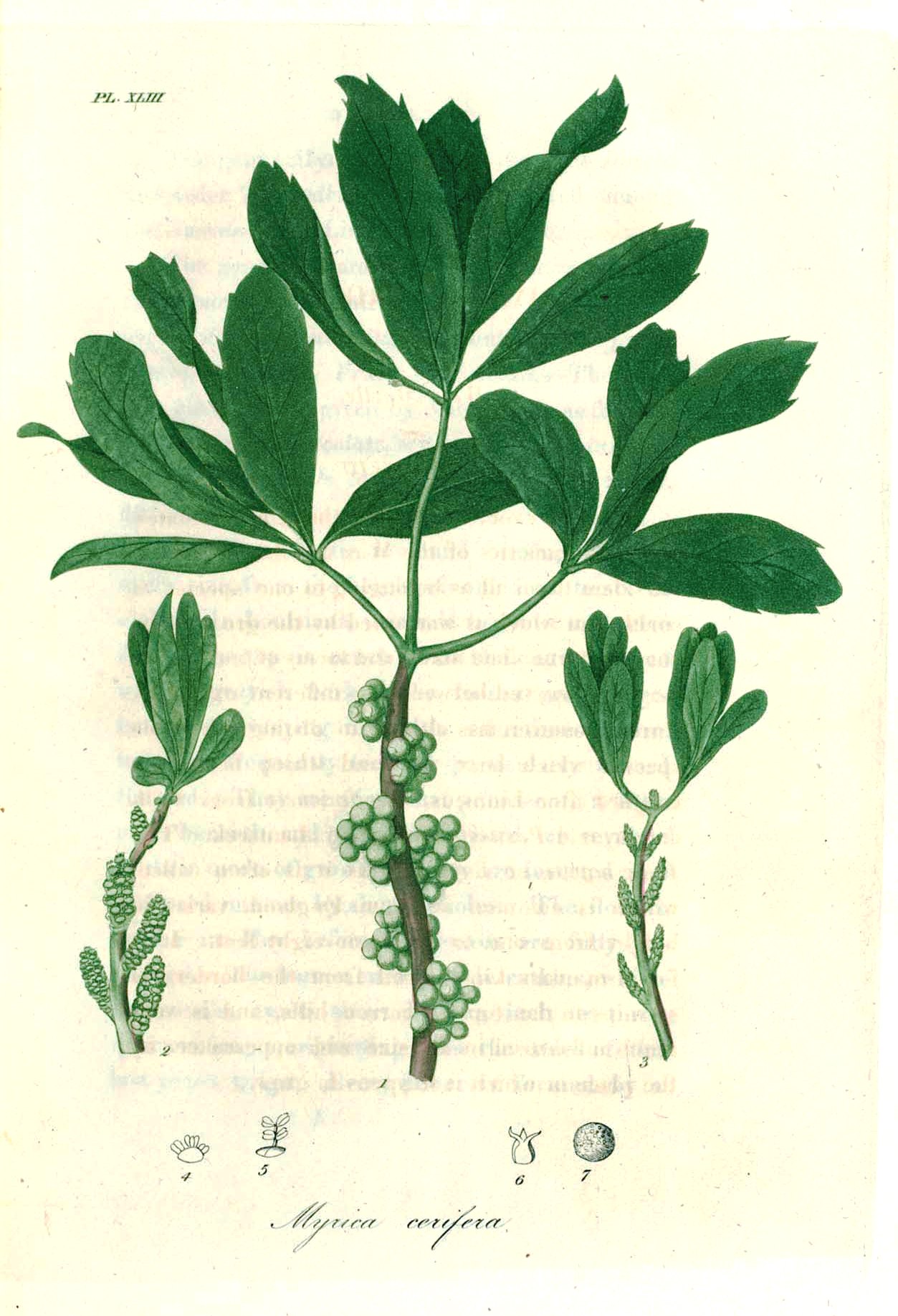 Description –
Myrica cerifera is a plant in the form of a small tree or large shrub that reaches up to 14 m in height.
It is an evergreen plant with elongated leaves with a leathery texture and serrated edges that contain aromatic compounds.
It is a dioecious plant, with male and female flowers carried in catkins on separate plants.
Male flowers have three or four stamens and are surrounded by short bracts.
The female flowers develop into fruits, which are globular and surrounded by a natural wax-like coating. The species blooms from late winter to spring and bears fruit in late summer or autumn. There is no endosperm present on the seeds.
This species comes in two forms, but there is no clear dividing line between them, as there are many intermediate forms. Specimens in the driest and sandiest areas are shrub-like, have smaller rhizomes and leaves. Those that grow in moist areas with richer soil are more like trees with larger leaves.

Cultivation –
The southern wax myrtle is a plant that grows spontaneously in an area ranging from Central America, north to south-east and south-central United States but also in Bermuda and the Caribbean.
It is successfully grown as far north, in the New York City area as in the southern Ohio Valley and in other parts of the world including Europe.
It is a resistant and very versatile plant that in addition to being used spontaneously is cultivated and used locally as a source of wax, as a food, medicine and source of dyes. Sometimes it is also grown as a hedge.
However, the plant prefers a position in open areas and with moist soil, well drained in the sun or in light shade. It prefers clayey or peaty soil without limestone. Furthermore, the established plants are quite resistant to drought and in areas exposed to even brackish winds.
Furthermore, it should be remembered that many species of this genus have a symbiotic relationship with some soil microorganisms, these form nodules on the roots and fix atmospheric nitrogen. Some of this nitrogen is used by the growing plant, but some can also be used by other plants growing nearby.
It should be emphasized that the roots of this plant host a symbiotic species of actinomycotal bacteria, which fix nitrogen at a faster rate than legumes.
Propagation can take place by sowing in autumn, using just ripe seeds, in a cold greenhouse.
The stored seed germinates best if subjected to a cold stratification of 3 months and then sown in an unheated seedbed.
Germination is generally good and transplanting should be done when the seedlings are large enough to be handled and cultivated.
It is also possible to obtain cuttings with semi-mature wood, of 5 – 8 cm. these have a fair to good percentage of engraftment.

Customs and Traditions –
The southern wax myrtle is a plant that has been used since ancient times for both food and medicinal purposes.
It was used after boiling as a treatment for fever. In 1722, Louisiana settlers were reported to drink a mixture of wax and hot water to treat severe dysentery.
In a 1737 account it was stated that it was used to treat seizures, colic, paralysis and convulsions. Beginning in the early 19th century, herbalist Samuel Thomson recommended this plant to produce “heat” within the body and as a treatment for infectious diseases and diarrhea. This use declined later in the 19th century, in favor of use for a variety of ailments, including topical use for bleeding gums. Also for twenty years starting in 1916, the root bark of this plant was listed in the American National Formulary.
Even today the fruits can be eaten both raw and cooked, they have a diameter of about 3 mm with a large seed, there is very little meat and the quality is still poor. Furthermore, the fruit is covered with a balsamic-smelling wax deposit and this can remain on the plant for several years.
The leaves and berries are used as a food flavoring; they are an aromatic, attractive and pleasant substitute for bay leaves and can be used to flavor soups, stews, etc.
The dried leaves are prepared to make a strong tea.
Myrica cerifera is, as mentioned, a plant with many medicinal uses. It is in fact a popular herbal remedy in North America, where it is used to increase circulation, stimulate sweating and keep bacterial infections under control.
The root bark is antibacterial, astringent, emetic (in large doses), causes sneezing, stimulant and tonic.
The plant contains several organic compounds, including: triterpenes such as myricadiol, taraxerol and taraxerone, as well as chemicals such as different flavonoids, tannins, resins, gums and phenols. Myricadiol has a slight impact on potassium and sodium levels, and there is also myricitrin with possible antibiotic properties.
However, please note that the plant must not be used during pregnancy.
It has been reported that some of the constituents of the wax are carcinogenic but there is a lack of proper testing and research.
The southern wax myrtle is astringent and slightly narcotic.
It is considered a safe cure for dysentery and is also used to treat internal ulcers.
A tea, which is made from the leaves, is used in the treatment of fevers and externally as a cleanser for itchy skin.
Other uses include agroforestry ones. The plant can be grown as an informal hedge, which is great in windy sites.
In addition, the waxy coating of the fruit contains palmitic acid and is extracted by blanching the fruits with boiling water and soaking them for a few minutes, the wax floats on the surface and is then skimmed. The fruit is then boiled in water to extract the wax from the pulp and once again the wax is skimmed. It is then filtered through a muslin cloth and can be used to make aromatic candles, sealing wax, etc.
Candles made with this wax are quite fragile but are firmer and less greasy in hot weather. The wax is in fact solid and hard and for this reason candles are particularly suitable for hot climates.
The candles are slightly aromatic, with a pleasant balsamic smell and do not smoke when blown out, which makes them much more pleasant to use than wax or tallow candles.
Wax is also used to make soaps and shoe polish. From 4 kilos of berries you get about 1 kilo of wax. However, Myrica cerifera has been less and less used for the production of wax and supplanted by the production of candles by paraffin-based substitutes. Replacement candles have artificial colors and scents that create candles that look and smell similar to natural ones.
Furthermore, a blue dye is obtained from the fruit.
Furthermore, the wood of this plant is light, soft, brittle and fine-grained but has no commercial value.
Ecologically, the fruits are a food source for many bird species, including the northern white quail and wild turkey. In winter, the seeds are important food for the Carolina wren and tree sparrow species and other animals. The digestive system of birds removes the wax from the fruit, a prerequisite for the germination of the seed that is thus spread.
These plants, due to the presence of wax, are however subject to fires, however the root system of M. cerifera is resistant to fire but cannot withstand repeated fires.

Preparation Method –
Myrica cerifera is a plant of which various parts are used.
The bark is harvested in the fall, dried thoroughly, then pulverized and stored in a dark place in an airtight container.
It is used for internal use in the treatment of diarrhea, irritable bowel syndrome, jaundice, fever, cold, flu, phlegm, excessive menstruation, vaginal discharge, etc.
Externally it is applied to indolent ulcers, sore throats, spongy gums, sores, itchy skin conditions, dandruff, etc.
Typically, either a decoction or a tincture is used. Infusions and a topical paste were also used.
In addition, the leaves can be washed, dried and used to season stews or cooking sauces.
The berries can also be used as a condiment.