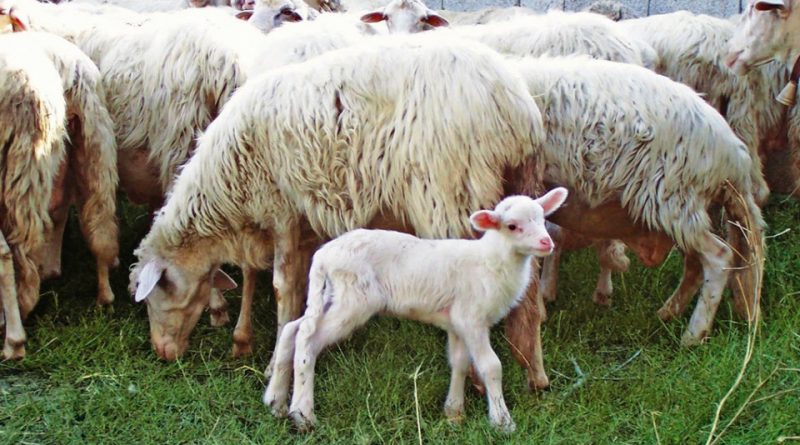 The Sarda is an indigenous breed of sheep from Sardinia (Ovis aries Linnaeus, 1758), with a main aptitude for milk production.

Geographic and Area Distribution –
The Sarda is an indigenous sheep breed of Sardinia, it is also present in some regions of the Italian peninsula, mainly Tuscany, Lazio, Umbria, Marche, Emilia-Romagna, and in many central-southern regions, such as Abruzzo and Basilicata.
This breed spread in the Italian territory especially around the 60s thanks to the emigration of Sardinian shepherds in abandoned rural areas of central Italy.

Origins and History –
The Sardinian sheep breed is one of the oldest in Europe and is native to Sardinia and is believed to derive from the mouflon that lives in the wild on the Gennargentu mountains.
This breed is the result of a millenary culture and an ancient tradition, the pastoral one, which has always been closely linked to the history and economy of the island. The first evidence dates back to the pre-Nuraghic era (3000 BC). Virgil too, in the Georgics, mentions the common practice of Sardinian and Libyan shepherds of wild and wandering grazing in all seasons. The trade of suckling lambs in Sardinia has a very long history: already in the early years of the twentieth century they were transported, in wicker baskets, by train to the ports and destined for the markets of the Italian peninsula.
The Sardinian breed represents about 44% of the national sheep herd, with 3,142,382 heads on the island alone (of which 2,566,396 sheep, 457,518 saccaie and 118,468 rams) out of a national total of 7,208,032 heads as of September 2014.
The current farms vary in size according to the geographical area; while, in the past, the average consistency of Sardinian flocks was around 100-180 head, today it is 238 head, with 8.7% over 500 head per flock.
The Sarda is a rustic and very productive sheep breed, not very suitable for the production of meat and wool (modest quantities and not very valuable).

Morphology –
The Sardinian is a medium-sized breed of sheep with a height of the males of cm. 71 and females of cm. 63 and with a respective average weight of 59 kg for males and 42 kg for females.
It has a light head, usually a little elongated with a straight or slightly sheepskin profile in males, a uniformly white face with a lively expression. The eyes are large and lively with a slight swelling of the eyelids; the nostrils are wide, the mouth is wide, the ears are medium or small, mobile, carried horizontally and sometimes even a little hanging, the horns absent in females or poorly developed, absent or rudimentary in males.
The neck is well joined to the shoulders and chest, long and slender in the females, stronger and more robust in the males.
The trunk of this breed is elongated in a truncated cone shape, with well-closed withers, slightly pronounced and rather sharp in the sheep, more muscular in the ram; the chest is deep and slightly flat, shoulders well set, light, rightly inclined and in harmony with the surrounding regions; strong and straight back; correct top line; Loins wide and strong aligned with the back, belly capable, rounded and well shaped, full hips, wide and deep, slightly sloping rump, longer than wide, flat thigh, lean and well descended.
It has a slender and long tail.
The udder has a spherical conformation, wide, well supported, strong in the attacks, with a soft, spongy, elastic texture, almost limp after milking, well supplied by the peripheral blood flow and with well proportioned and well directed teats.
The fleece is also white in color, open, consisting of pointed tufts, with the presence of dead hair in the underfleece, extended up to the middle of the forearm and just above the hock.
The skin is thin, elastic and pinkish-white in color, sometimes with slight black or brown spots on the head, in the limbs, and generally in the parts without wool.

Productive attitude –
The Sarda is a sheep breed with reproductive characteristics typical of dairy sheep: the births of the primiparous take place in spring (March-April) at an age of 15 months while the pluriparous give birth in autumn-winter, as the mounts start from the end of May (typically from the beginning of June) for the latter and last until October for the “saccàias” (Sardinian term that indicates the young sheep of about 6-15 months waiting for the first fertilization).
Lambs live with their mothers and are therefore raised in wild and semi-wild pastures. Only in winter are they hospitalized in covered structures. The Lambs of Sardinia IGP from Milk are suckled by the mothers, while those of the Light and Cut type integrate breastfeeding with natural pasture essences and with fresh and dried fodder and cereals. The animals suitable for the production of the PGI are marked by the farmers with green ear tags that distinguish them at all times from those not included in the PGI certification system. The slaughtering of the PGI takes place separately and, only after verification of compliance with the characteristics provided for by the production specification, the slaughterer affixes a label on the carcass bearing the consortium brand and that of the PGI, the category, the denomination of the cut and the slaughterhouse.
It has fairly good fertility, with around 85-90% of sheep giving birth within the year. The average prolificacy of the breed is around 1.3-1.4 lambs per calving, a little lower for primiparas.
The lambs at birth weigh around 3.5–4 kg in weight, after a month they come to weigh around 10–15 kg.
The average milk production (without breastfeeding) is: 130 liters for the primiparous (in 100 days) and 180 liters for the multiparous; the consistency is 6.0-6.7% fat and 5.3-5.8% protein.
Meat production is 44.5 kg for males and 32.5 kg for females.
From a gastronomic point of view, its meat can be stored in the refrigerator for a few days: the high content of Vitamin E, a natural antioxidant, performs the function of protecting its nutritional, functional and sensorial characteristics. Its white meat, very tender and lean, is extremely digestible and rich in noble proteins. The preparations range from roasts, to stewed cooking with seasonal vegetables, but also as an ingredient for sauces and soups. To be paired with not too structured red wines.
The production of wool (in grease) is 2.5 kg for the rams and 1.2 kg for the sheep.