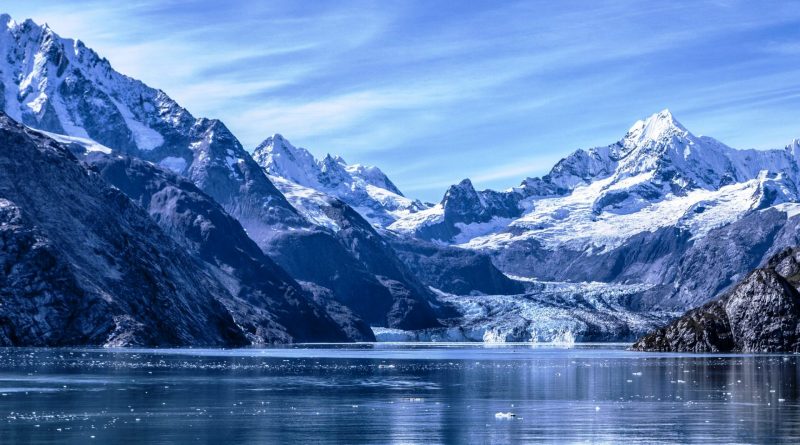 Glacier Bay National Park and Preserve, whose WDPA Code is: 1010, is a United States National Park located in Alaska near Juneau, the capital of Alaska.
This national park begins its history when the Glacier Bay area was declared a National Monument on February 25, 1925; in 1980, with the establishment of the national park, the name became the current one. The park area, which covers an area of ​​over 13,000 square kilometers, has been a biosphere reserve since 1986.
There are no roads leading to the park: to reach it you can use ferries or small planes that depart from the small village of Gustavus. Despite the lack of roads, 380,000 people visit the park every year.
The glaciers that descend into the bay from the snow-capped peaks of the surrounding mountains form one of the most spectacular ice and iceberg landscapes in the world. The most famous glacier in Glacier Bay is probably the Muir Glacier, which is 3 kilometers wide and 80 meters thick.

Geography –
In 1974 when Captain George Vancouver plowed the adjacent waters of the Ice Strait, he and his crew described what we now call Glacier Bay as just a small five-mile indentation in a giant glacier that stretched to the horizon. That massive glacier was more than 4,000 feet thick in places, up to 20 miles wide, and stretched more than 100 miles to the Sant’Elia mountain range. In 1879, however, naturalist John Muir discovered that the ice had retreated over 30 miles to form a real bay. By 1916, the Grand Pacific Glacier – the main glacier credited with carving the bay – had melted 60 miles at the start of present-day Tarr Inlet.
The land near the mouth of the bay, freed long ago from the grip of glaciers, has had more time to recover and is now covered with mature spruce and hemlock woods. As you travel towards the glaciers, the vegetation becomes younger and smaller, until it reaches the surface of the ice where nothing grows at all. The succession processes so evident here have provided an unprecedented opportunity for scientific observation, and glaciologists, geologists, plant ecologists and other scientists have come here to study this dynamic landscape. While recounting his scientific work in Glacier Bay, a plant ecologist named William Cooper inspired his colleagues in the Ecological Society of America so much that they began the movement to protect the bay and its surroundings.
Thus it was that in 1925, President Calvin Coolidge declared Glacier Bay a national monument. Today Glacier Bay National Park and Preserve continues to protect these natural resources that offer a glimpse into past ice ages amidst a thriving and dynamic natural environment. 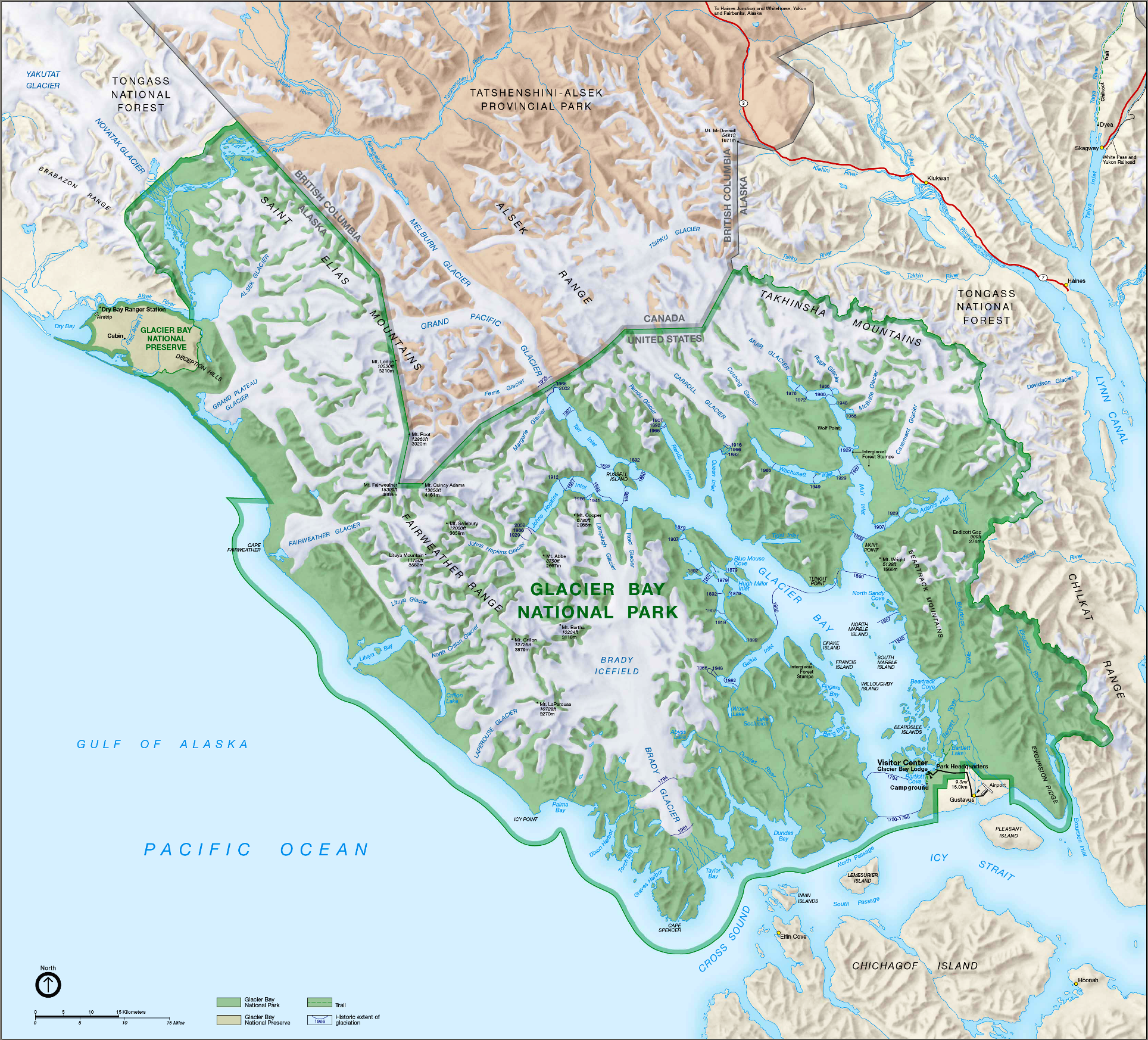 Flora –
Glacier Bay is covered in a mosaic of plant life, from a few pioneer species in areas recently exposed to complex balanced climax communities in coastal and alpine regions. Because virtually all of the bay’s vegetation has returned to earth in the past 300 years following the retreat of glaciers, this area is one of the leading sites on the planet for studying plant recolonization.
In the classic story of plant succession, spores or seeds are spread to a new area by the wind or carried by birds or other animals. Lichen spores that land on the appropriate rock surface will anchor themselves to the rock using root-like structures called “rhizomes”. Unlike most plants, lichens absorb essential nutrients from the air and rain rather than through roots in the soil. As they grow, lichens secrete an acid that dissolves the rock around them, creating soil.
As the soil develops, more seeds and spores arrive, such as those of mosses, horsetails, etc.
Over time, these pioneer communities can develop into dense groves of nitrogen-fixing alders and black poplars that enrich the soil and provide shelter for other colonizing species such as willow.
Further away from glaciers in time and space, the plains near the mouth of Glacier Bay have been cloaked in a rainforest of spruce and hemlock and lush spongy tracts of moss. In the surrounding mountains, dense mats of flowers and heath cover the hills and alpine meadows.

Fauna –
The ocean and land environments in Glacier Bay National Park and Preserve are closely intertwined. Marine waters make up nearly a fifth of the park, and no land point is more than 30 miles from the coast. This means that the life of nearly all of Glacier Bay’s animals is tied to its productive marine waters or biologically rich shores.
Although the park’s name focuses on glaciers, there’s abundant marine life, waterfowl, shorebirds, and land-rooted wildlife to keep your eyes glued to binoculars.
From tip to tail whales and brown bears the park contains an incredible menagerie of wildlife.
Killer whales also ply these waters, although they are not seen as frequently as humpback whales.
Harbor and Dall porpoises also swim in the bay, while Steller’s raucous sea lions can be seen dragged across the rocks of South Marble Island. Playful sea otters float on their backs, while eating or just for fun, while harbor seals curiously poke their heads above the water to snoop around.
And, as fishermen know, the park offers five species of salmon to catch, in addition to halibut, among the nearly 200 species of fish that have been counted.
Bears – both coastal brown bears (also known as grizzlies) and black varieties – and wolves can be encountered on land, although they are more reserved. Moose are common in the park, and if you look closely at the cliffs you might see some of Glacier Bay’s mountain goats.
On the rocky outcrops along the coast you might also see a somewhat smaller inhabitant of the park: the hoary marmot. River otters and martens are also often sighted.
Bird watchers can easily add quickly and meaningfully to their life lists with a day cruise through the park, as South Marble Island is crowded with birds. Here you can see Murrelets, both marbled and Kittlitz, common murres, puffins and tufts, pigeon guillemots, pelagic cormorants, glaucous gulls and more.
Elsewhere along the bay and its coves you may spot Arctic terns, Kittiwake, Teals, Brandt’s geese, common grebes, sea and white-winged orcs, black oystercatchers, golden Barrow eyes and meowing gulls.
And of course, bald eagles are abundant and often spotted exploring their domain from the spruce trees along the banks.
More common species can be spotted ashore: Steller’s jays, crows, ravens, wrens, magpies, red pigeons, hairy and fluffy woodpeckers and tits.