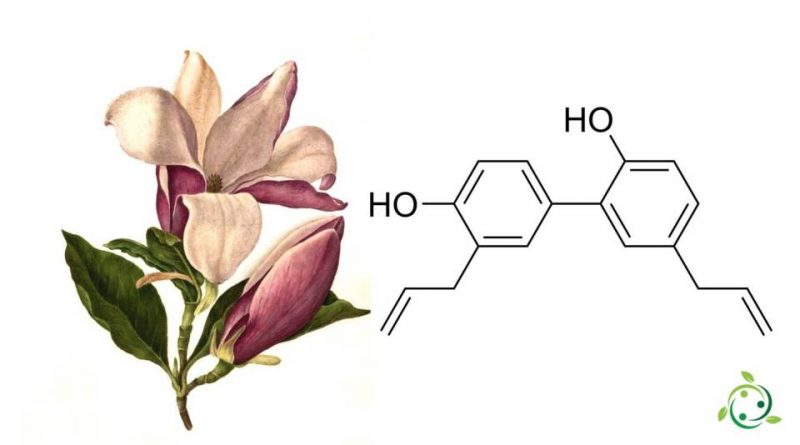 The honokiol, whose term in the official IUPAC nomenclature is: 3 ′, 5-Di (prop-2-en-1-il) [1,1′-biphenyl] -2,4′-diol is a lignano with brute or molecular formula: C18H18O2.
In nature, honokiol is isolated from the bark, seed cones and leaves of trees belonging to the Magnolia genus.
This substance is one of the chemical compounds in some traditional oriental herbal medicines along with magnolol.
Honokiol has been extracted from a number of Magnolia species native to many regions of the globe. These include Magnolia grandiflora, which is native to the American South, as well as Mexican species such as Magnolia dealbata.
Traditionally in Asian medicine it comes from the use of Magnolia biondii, Magnolia obovata and Magnolia officinalis. The compound has a spicy smell.
Due to its physical properties, honokiol can easily cross the blood brain barrier and the blood-cerebrospinal fluid barrier.
This peculiarity derives from the fact that honokiol is a relatively small polyphenol and can interact with the proteins of the cell membrane through intermolecular interactions such as hydrogen bond, hydrophobic interactions or the covalence of the more aromatic orbital.
Physically it is hydrophobic and easily soluble in lipids.
The production of honokiol can be achieved in nature, where it exists with its structural isomer magnolol, which differs from onokiol only in the position of a hydroxyl group. Due to the very similar properties of magnolol and honokiol, purification was often limited to an HPLC or electromigration. However, the methods developed in 2006 by workers in the laboratory of Jack L. Arbiser exploited the proximity of the phenolic hydroxyl groups in the magnolol, which form a protectable diol, to generate a magnolol acetonide, with a subsequent simple purification by flash chromatography on silica. .

As for the demonstrated properties of honokiol, these are: anti-inflammatory, antioxidant, hepatoprotective and sedative (of the central nervous system).
In fact, it acts on the gamma-aminobutyric acid receptor, otherwise known as “GABA”, the main inhibitory neurotransmitter in the brain, also known as “the calm hormone”.
GABA influences brain activity, modulating alpha waves, related to a state of relaxation, and beta waves, associated with an anxiety and stress condition. In fact, it has the task of slowing down the activity of the brain and reducing the electrical activity of neurons, inducing relaxation and reducing pain. When the levels of this neurotransmitter are low it can therefore happen to feel agitated, tired and easily excitable (very susceptible to external stimuli).
A deficiency of this substance is attributed to various factors, such as stress, glycemic imbalances (eg a diet too rich in sugar), diabetes, celiac disease, and other autoimmune diseases. A GABA deficiency can trigger a variety of ailments, such as unmotivated stress, anxiety and panic, poor attention, restless mind, and even muscle spasms.
Honokiol, used in the form of a supplement, is therefore useful for counteracting anxiety, relieving stress, promoting concentration and sleep. This compound also boasts antimicrobial, anti-inflammatory and antioxidant properties. In phytoderivatives, honokiol is usually associated with magnolol. This substance is mainly extracted from the bark of Magnolia Officinalis and like honokiol it is a modulator of the GABA receptor, and therefore has anxiolytic properties. It is able to reduce the states associated with psycho-physical stress by inhibiting the production of cortisol, also known as the “stress hormone”, which also causes you to eat more sugar and accumulate abdominal fat.
With regard to contraindications and side effects, currently no significant toxicity or side effect associated with the use of honokiol has been reported, as long as the recommended dosages are respected. As with all phytoderivatives, their use during pregnancy or breastfeeding is not recommended.