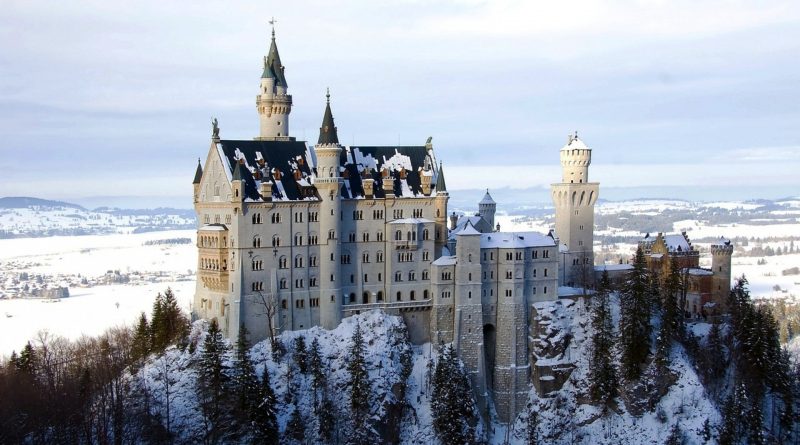 Germany is a member state of the European Union located in central-western Europe, a federal parliamentary republic of sixteen states (Bundesländer).
Germany has a total area of ​​357,582 km² and a population of 83,995,966 inhabitants (2021).
The capital of Germany is Berlimo with 3,769,495 inhabitants.
This country borders: Austria, Belgium, Denmark, France, Luxembourg, the Netherlands, Poland, the Czech Republic and Switzerland. To the north it is washed by the North Sea and the Baltic Sea.
The territory of Germany is characterized by an Atlantic climate in the north-western part and continental in the south-eastern part.
Germany is the fourth largest economic power in the world after the United States, China and Japan; it is the fourth largest economy in terms of nominal GDP and the fifth largest in terms of purchasing power parity.

Geography –
The territory of Germany consists of 349,223 km² of land and 7,798 km² of water surfaces. It is the seventh largest country in Europe. It extends from the high mountains of the Alps (highest point: the Zugspitze at 2962 m) in the south, to the coasts of the North Sea and the Baltic Sea in the north, in the east it is bordered by the confluence of the Oder and Neisse rivers while in the west the delimit the basin and the Rhine valley.
The coasts of the North Sea are flat with sand dunes (sandig) and fronted by archipelagos such as the East Frisian and North Frisian ones while the coasts of the Baltic Sea have a more irregular profile with numerous lagoons (called Bodden) that penetrate deep into the inland. The two islands of Rügen and Usedom face the coast. From a geographical point of view, the German territory can be divided into four distinct areas:
– the Germanic Lowland, a large flat area located in the northern part of the country;
– the Hercynian reliefs of the Mittelgebirge, an area of ​​reliefs located between the northern plains and the Alps comprising various mountain formations among which the best known are the Rhenish schist massif, the Thuringian Forest, the Teutoburg Forest, the Black Forest, the Mountains Ore, the Bohemian Forest and the Bavarian Forest;
– the Swabian-Bavarian plateau located at the foot of the Alps with an average height of about 500 m a.s.l. and with numerous moraine lakes, it is crossed by several tributaries of the Danube;
– to the south is the area of ​​the German Alps that delimit the border with Austria: characterized by the presence of numerous alpine lakes, their highest point is the summit of the Zugspitze (2962 m a.s.l.).
From the hydrographic point of view, Germany is crossed by some important rivers. The main rivers in Germany are the Danube, Elbe, Rhine, Main, Oder, Weser and Ems. In addition, Germany is rich in artificial canals that allow the transport of goods throughout the country. In particular, the Rhine-Main-Danube Canal (Rhein-Main-Donau-Kanal), inaugurated in 1992, crossing the watershed between the Rhine river basin and the Danube river basin, connects the North Sea with the Black Sea. 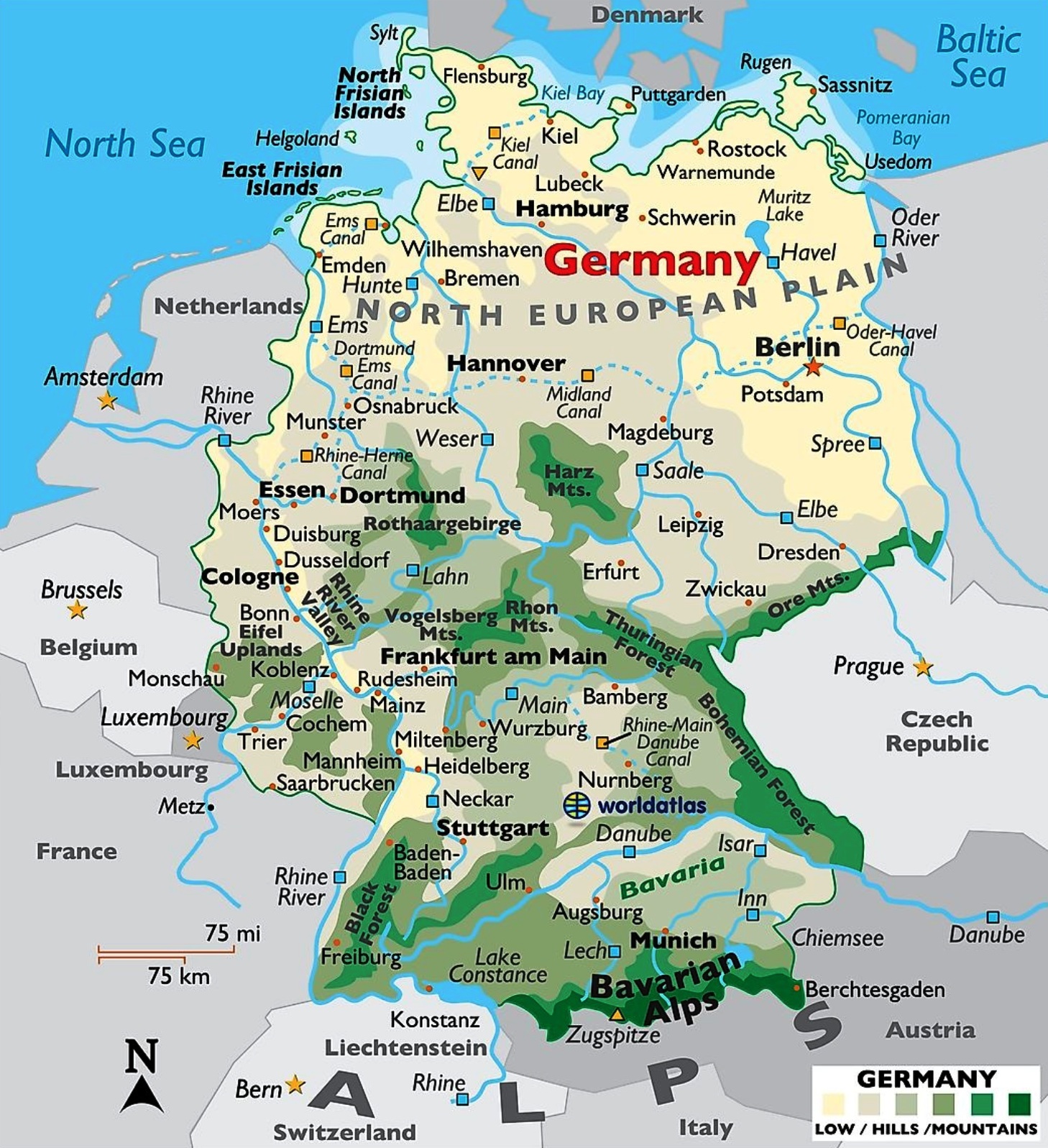 Climate –
From the climatic point of view, Germany is affected by the influence of the Atlantic winds coming from the west; this means that the climate is wetter as you go from south to north. The areas with the wettest climate are the lowlands near the Netherlands and the regions bordering the North Sea, including the Jutland peninsula, which have an oceanic climate. In the north-west and north, therefore, rainfall occurs throughout the year with a maximum during the summer. Winters are characterized by cold-humid westerly winds, snow falls frequently but accumulations are mostly negligible, frosts are frequent and summers tend to be cool, windy, often stormy. Towards the east, the climate is more continental; winters are often long and very harsh and summers are generally quite hot. Central Germany is a transitional region between oceanic and continental climate. The climate of southern Germany is the most continental of the whole nation with strong annual temperature variations; winters are generally cold and snowy, with long periods of frost; the summer heat is often broken by intense thunderstorms that generally form in the Alps and then descend towards the plains.

Flora –
Germany is a country that makes a great contribution to the center of Europe due to its wooded area.
About one third of the territory is covered with forests.
The Bosco (der Wald) has, in German culture, an almost religious importance: it is the background of many fairy tales, it is the recreational place, it is the object of many songs.
Unfortunately, the high level of pollution has very serious effects on forests: it is estimated that only 29% of the trees in Bavaria are not damaged. Among the trees most affected would be the silver fir.
This tree is normally used to become the Christmas tree. It is a tradition that probably originated from Alsace, and spread in German culture where it even took on a role in literature thanks to Goethe.
The wooded vegetation is mostly broad-leaved and has specimens such as oak, ash, lime, beech; conifers such as fir and larch are located further north.
In the Alps, the flora does not differ too much from that of the southern slopes, with spruce and white fir, which downwards gives way to beech, while upwards it passes to stone pine, larch and finally to high altitude pastures ( the limit of the woods is at about 1700 m in the Alps, at 1300 in the Šumava and at 1000 in the Harz). From the Black Forest (Schwarzwald) to the Bohemian Forest (Böhmerwald), silver fir predominates. In the lowlands and coastal areas, birches are mixed with Scots pine. The undergrowth is made up of northern species, such as holly and heather. The southern valleys, up to the Rhine-Moselle confluence, have mild enough climates to allow the presence of Atlantic-Mediterranean flora (man has taken advantage of this feature by developing the cultivation of the vine).

Fauna –
The fauna of Germany is not very rich: it is mostly mammals such as deer, badgers, hares that live in the woods or in the mountains.
In general, the situation of wildlife is negative: in historical times the last bears, bison, ibex and lynx have disappeared; endangered are wild cats and moose among mammals, eagles and vultures among birds; wolves are also considered endangered. However, the birds are numerous, with many migratory species (waders, gallinaceous, palmipeds). Among the mammals there are still cervids, otters and ermines.
Among the birds, the White Stork is very common.
Among the fish of the North Sea, cod and herring also play an important role in feeding.