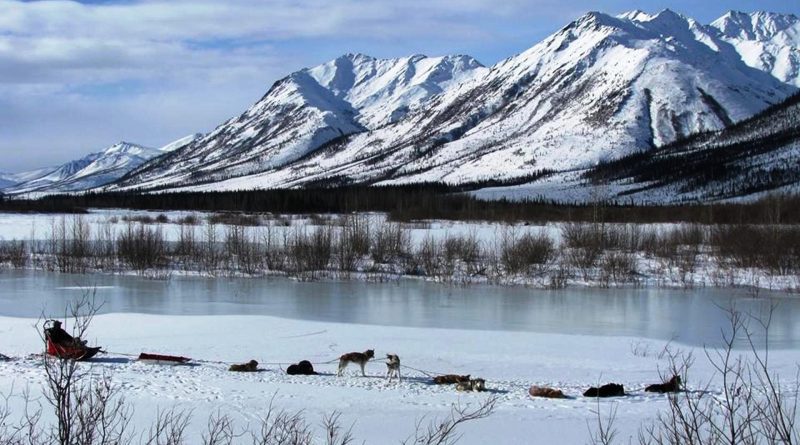 The Gates of the Arctic National Park and Preserve, whose WDPA Code is: 1006 is a United States National Park, located in Alaska, with a land area of: 34,287 km².
This park was established in 1980 and is managed by the National Park Service.
The park extends into the Brooks Mountains in northern Alaska. It is the northernmost national park in the United States of America, located entirely north of the Arctic Circle; it is also the second largest park in the United States.
The Gates of the Arctic National Park and Preserve was initially designated as a national monument on December 1, 1978, before being reclassified as a national park and reserve following the passage of the Alaska National Interest Lands Conservation Act in 1980.
The park includes the Endicott Mountains and part of the Schwatka Mountains. Most of the area is designated as a national park, where only subsistence hunting by local rural communities is allowed. Sport hunting is permitted only in the national reserve, upon possession of the relevant licenses and permits.
Ten small communities reside outside the park boundaries and are classified as “resident zone communities” as they depend on the park’s resources for livelihoods. These are Alatna, Allakaket, Ambler, Anaktuvuk Pass, Bettles, Evansville, Hughes, Kobuk, Nuiqsut, Shungnak and Wiseman.

Geography –
The park’s eastern boundary follows the Dalton Highway route at a distance of a few miles, with the westernmost part of the Arctic National Wildlife Refuge 10 miles further east. Kanuti National Wildlife Refuge is located near the park’s southeast edge. The Noatak National Preserve borders the park’s west and Alaska’s National Petroleum Reserve borders the park’s northwest corner. Almost all of the park consists of desert, with the exception of the areas adjacent to the Anaktuvuk pass.
There are no roads, trails, visitor facilities or organized campsites within the park. Additionally, some 105,000 acres of the park and reserve are owned by Native or Alaskan companies, while 2,939,000 acres are protected by the Gates of the Arctic Wilderness.
Inside the park there are reliefs such as the Arrigetch Peaks and Mount Igikpak and six rivers included in the Wild and Scenic Rivers circuit:
– Alatna 83 miles (134 km);
– John 52 miles (84 km);
– Kobuk 110 miles (177 km);
– the northern gallows of Koyukuk 102 miles (164 km);
– part of the Noatak;
– Tinayguk 44 miles (71 km).

Geology –
Gates of the Arctic National Park and Preserve encompasses much of the Brooks Mountains range. It extends east to the central fork of the Koyukuk River, parallel to the Dalton Highway and the Trans-Alaska Pipeline. The park straddles the Continental Divide, a watershed that divides the catchment area of ​​the Pacific Ocean from that of the Arctic Ocean. The northernmost section of the park includes small portions of Arctic tundra. The Brooks Mountains occupy the central section of the park, lying on an east-west line. South of the Brooks Mountains, the Ambler-Chandalar Ridge, with its valleys and lakes, rises from east to west. The southernmost part of the park includes the plains of Kobuk-Selawik, with the headwaters of the Kobuk River. The Brooks Mountains have been subject to numerous glaciations, the most recent of which is called the Itkillik glaciation (occurring in a period ranging from 24,000 years ago to about 1500-1200 years ago).

Climate –
The Gates of the Arctic National Park and Preserve, according to the Köppen climate classification system, has a subarctic climate with cool summers and rainfall distributed throughout the year, with an annual minimum temperature of -41.4 ° C. 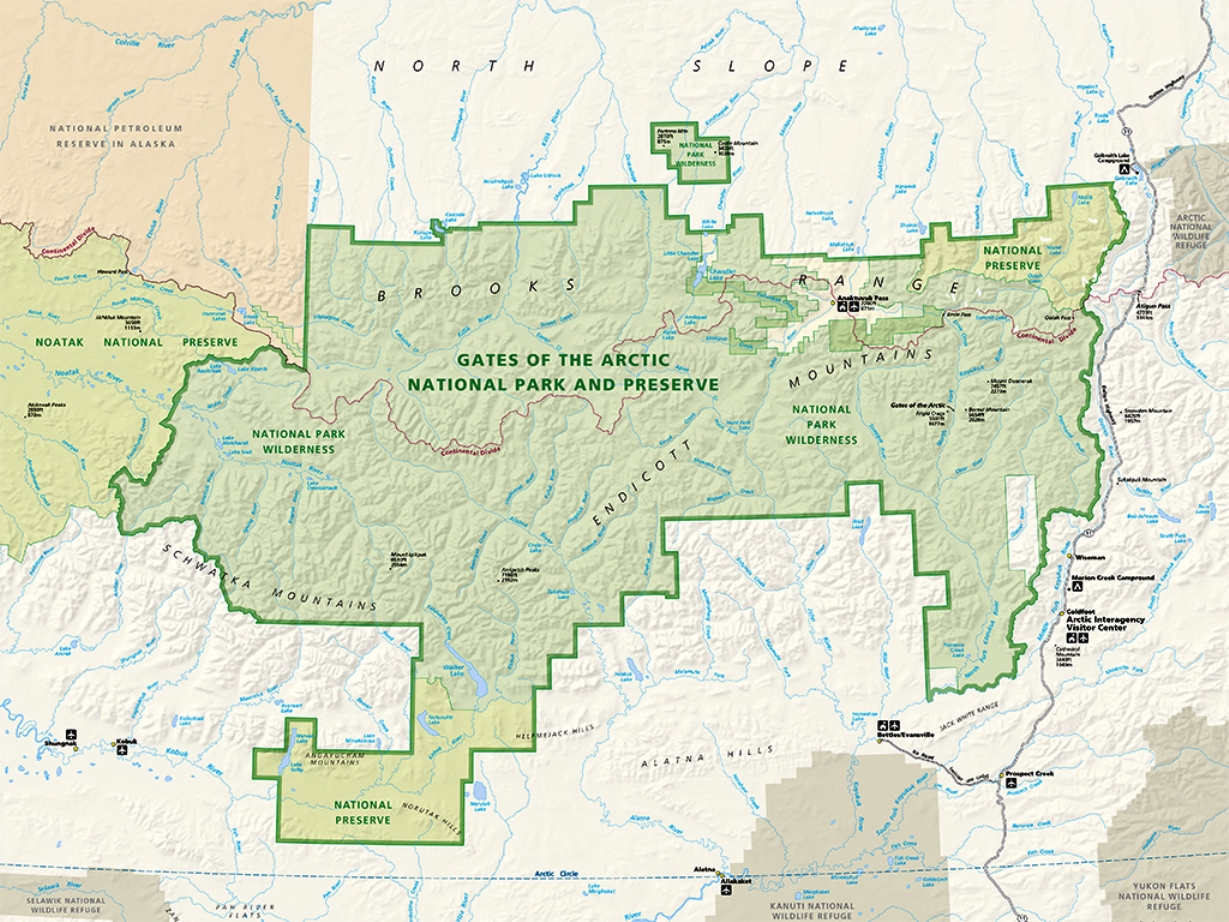 Flora –
Inside the park we find the boreal forest that extends up to about 68 degrees north latitude, and is characterized by the presence of black spruces and poplars. North of that parallel, which coincides with the ridge of the Brooks Mountains, the territory is arid and cold. During the long winters temperatures can reach -59 ° C, but during the summer peaks of 32 ° C have been recorded for short periods. The entire surface of the park is located north of the Arctic Circle.
But the boreal forest is not simply a vast unbroken forest; it is a mosaic of different plant communities: strips of spruce, aspen and birch, intertwined together with thickets of shrubs, meadows and swampy mosses.
To live here, the plants must adapt to a spectacular climate: hot summers with endless sunlight, followed by long, dark and very cold winters. Rivers, streams, lakes and ponds are everywhere, yet this is a very dry climate, even drier than the desert. Soils are thin and nutrient-poor, and inadequately drained due to the frozen ground below. And if all these factors weren’t enough to tax the hardiest plants, they must also adapt to frequent fires.
The boreal forest is often called the bird factory of North America due to the incredible abundance and diversity of migratory birds that nest here every summer. Some species, such as Swainson’s thrush, fly at least 7,000 miles from tropical South America, attracted by the bounty of insects rich in essential proteins for their growing nestlings.
Today, the boreal forest is also increasingly important because the plants, roots and soil contain huge amounts of carbon dioxide.
In fact, circumpolar forests store more carbon than any other terrestrial ecosystem – about 30% of the total carbon on the earth’s continents. Scientists say preserving boreal forests can be vital for modulating climate change.
At higher altitudes, the forest gives way to meadows and tundra, then to increasingly arid and threatening landscapes of rocks, scree, snowfields and glaciers. The plants of the slopes and high mountains are exposed to great extremes of cold, wind and drought. Many, like the lovely purple-flowered moss specimen, hug the ground in tight little cushions, protecting them from wind and frost.
On the north side of the Brooks Range, the harsh climate and near-surface permafrost prevent forest growth. The land gives way to the sprawling tundra dominated by low shrubs and grassy bushes.
This is a time of change in the far north – a “greening of the Arctic” – as demonstrated by the well-documented increase in coverage of deciduous shrubs: green alder, willow and birch. Studies suggest that global climate change may be the cause. As this could have serious repercussions on plant and animal communities, many scientific studies are underway within the Gates of the Arctic National Park and Preserve.

Fauna –
The Gates of the Arctic National Park and Preserve, in addition to the richness of flora, has a great variety of animals that have adapted to these climatic conditions.
Fauna includes brown bears, black bears, musk oxen, moose, white bighorn sheep, Alaskan wolves, wolverines, coyotes, lynxes, marmots, porcupines, river otters, red foxes and arctic foxes, beavers, snow shoe hares, mice musk, bald eagles, golden eagles, peregrine falcons, ospreys and Virginia owls. More than half a million caribou migrate through the Mont Brooks twice a year, moving north in summer and south in winter. Caribou are an important source of livelihood for native peoples. The park is also the northernmost area where white bighorn sheep can be found. About 132 brown bears are estimated to reside in the park and reserve, based on a density of about one bear per 100 square miles (260 km²).
The summer period of the Central Brooks Range is characterized by a spectacular abundance of life: millions of insects, new luxuriant plants, prey for predators.
In fact, the availability of food is so great that birds undertake long migrations to get here in time to breed and raise their chicks on a protein-rich diet of mosquitoes and other prolific insects. Some birds have traveled unimaginable distances, such as Arctic terns flying from Antarctic waters, the longest migration of any bird in the world.
Caribou move from their wintering grounds in the boreal forest to calving areas in the coastal plain, feeding on lichens along the way. Grizzlies and black bears leave their burrows with the cubs born the previous winter. Small mammals like Arctic ground squirrels, lemmings, and voles, emerge from their winter homes to feed and have fun in the fresh air once again. Whitefish, pike and grayling feast on rivers and lakes.
Despite all the abundance of summer, it is a fleeting season, so for eight months of the year the intense cold and scarcity of winter prevail.
Insects and seeds suddenly become scarce, so most birds are forced to migrate or starve. The few remaining species have made special and often surprising adaptations. The ptarmigan, for example, has feathered feet that act like snowshoes allowing them to walk and forage atop the dusty surface. They have learned to dive or dig in the snow, which isolates them from the much colder air above.
Caribou and moose roam the boreal forest, sheltering in the trees, eating twigs and scratching to graze in the snow. Voles and lemmings live in chambers dug out of snow, spending their active winters in relative warmth, eating hidden food in the summer.
Some animals gain weight before winter and do not need to eat. Ground squirrels completely hibernate, while black and grizzly bears spend many months in a lighter, sleep-like dormancy within their burrows. Some fish become inactive after retreating to calm, deep waters under the ice of rivers and lakes. Beavers stay safe within their lodges and live mostly on stored food.
Winter survival for animals in the central Brooks Range means adaptation to scarcity and bitter cold.
But for those who make it, the arrival of summer represents a new rich season.