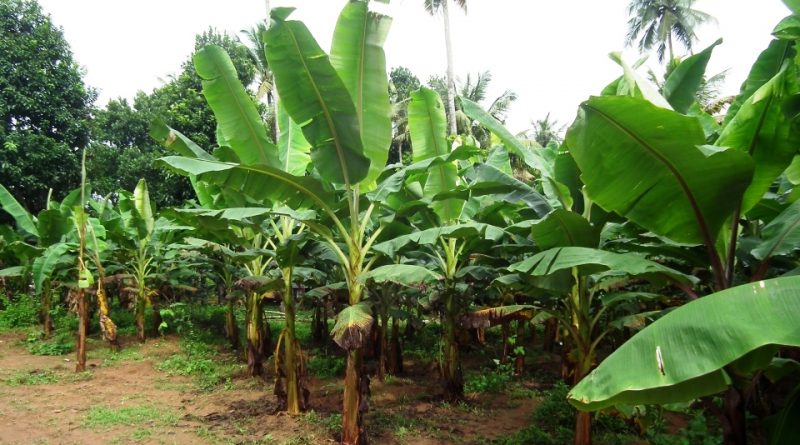 Etymology –
The term Musa comes from the Arabic moz or moza banano, Latinized by botanists in Musa. Others believe that the name recalls Antonio Musa, a Roman physician of the 1st century. B.C.
The specific paradisiacal epithet comes from paradisiacal, of paradise, from the ecclesiastical Latin paradisus paradise: in reference to the goodness of fruits.

Geographic Distribution and Habitat –
This taxon, described by Linnaeus in 1753, summarizes the hybrid forms of M. acuminata and M. balbisiana whose cultivars produce the great majority of the varieties of bananas for food use on the market today. This taxonomic classification, although obsolete, is still accepted, even if not suitable, to describe the hundreds of hybrid forms already present since ancient times and presumably created by domestication; A classification system was therefore introduced which divides the various hybrids on the basis of their genome.
The banana tree is however native to the tropical and humid jungles of South-East Asia, from where it was introduced in Europe, in the seventh century, thanks to merchants; later, in the 15th century, it was brought from the Canary Islands to America. Banana for fruit production has been cultivated in the Canary Islands since the end of the 19th century. 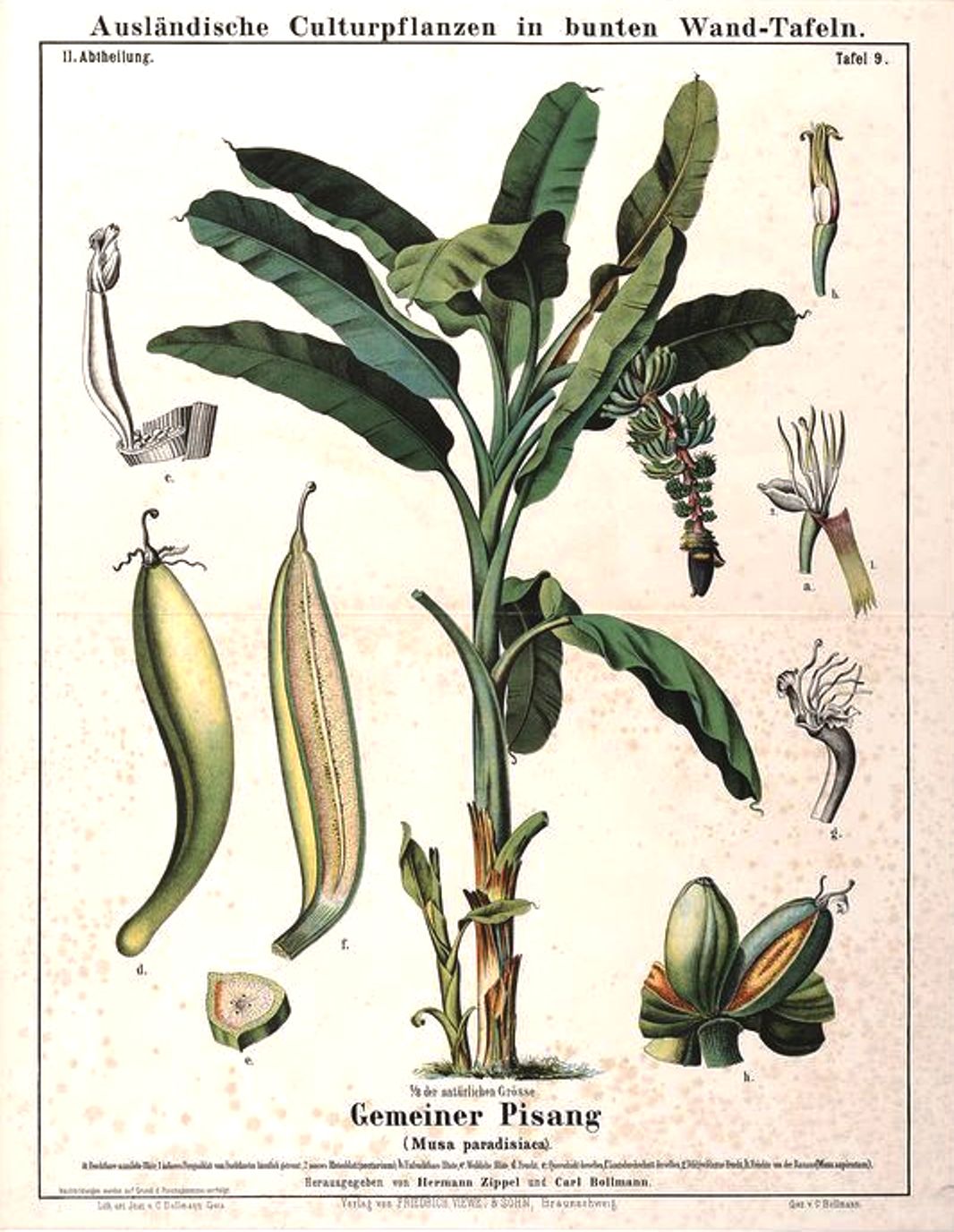 Description –
Banana plants is a gigantic herbaceous plant with a short stem until flowering that lives more than three years.
The tall stem is actually a pseudo-stem that derives from the petioles of the leaves and reaches a height of about 7.5 m.
The root system develops from a short rhizome, which is the authentic trunk; this is superficial, so the plant is sensitive to drought and competition from wild herbs that can grow around it.
Starting from the underground rhizome, the buds develop, which by germinating produce the shoots; their terminal buds, in turn, will produce the inflorescence that opens from a purplish cone.
The leaves, light green in color and sometimes with brown spots, are arranged in a spiral, are very long (from 2 to 4 m and 0.5 m wide) and open at a rate of one a week; with the wind and age they break, taking on the appearance of fringes.
The flowers are yellow and are gathered in hands; in each hand 3 to 20 fruits are formed. The hands are gathered in a “regime or helmet”, which can contain from 5 to 20 ‘hands’ or tufts.
Bananas are green in color and turn yellow with dark spots when ripe, the pulp is very tasty, soft and sweet, yellowish-white in color.
The fruit, the banana, is parthenocarpic or seedless.

Cultivation –
Currently, banana is the fourth most important crop in the world, after rice, wheat and maize; in many countries it is consumed as a fruit, but in others it is one of the staple foods and one of the most important exports.
Its diffusion is mainly due to the food properties of the fruits, which are mainly of two types: banana variety and plane tree variety. Especially the latter is of fundamental importance for the nutrition of many peoples, as it represents their main source of starch and nutrition. The edible fruits of both varieties, in fact, can be consumed in all degrees of ripeness, both raw and cooked, and if grown in areas with a suitable climate, they bear fruit several times a year.
Bananas, that is the fruits, are formed by parthenocarpy, therefore fertilization is not necessary. The optimal conditions for cultivation correspond to those of tropical or subtropical areas. In fact they need average temperatures, which oscillate between 26 ° and 27 ° C and prefer the plains near the coast and protected from the wind. Around the Mediterranean they can be cultivated, but high quality fruits are not obtained; moreover, the plants suffer damage due to low temperatures (below 13 ° C) and high temperatures (above 45 ° C).
Constant rains and high air humidity are two other environmental requirements for banana cultivation. The development of the new shoots is conditioned by the quantity and intensity of the light, especially in the subtropical areas, so that as the period of illumination decreases, a longer development process corresponds.
Banana grows in any type of soil, even if it prefers fertile ones, with the presence of water in summer and dry in winter; tolerates a wide range of pH, from 3.5 up to 9.
In the Canaries, varieties of dwarf banana are grown, the fruit of which has an excellent flavor and excellent preservation qualities. ‘Gran enana’, ‘Pequena enana’ and ‘Zelig’, are the varieties that have adapted best to the conditions of the Canary Islands; varieties obtained from local selections are also grown, such as ‘Brier’ and ‘Gruesa’.
Banana trees are planted in quincunx to make better use of the land. In a 3.5 x 35 m layout, two plants are arranged per hole; after 2 months the best is preserved, selecting shoots arranged as far as possible.
Growth is rapid if the climatic conditions are right, in about 10/12 months the banana plant will flower. The banana flower develops inside the stem until it is ready.
This plant, when it comes out, sprays water, so much so that its birth by the natives is compared to the birth of a child. The purple inflorescence is now ready for fertilization.
Care must be taken not to cut the leaves that surround it, because they serve to shelter it from the sun and wait for fertilization to take place.
At this point the petals will open, leaving the bunches of bananas in plain sight. The underside of the banana pods is the male flower (also known as the banana heart), which is also edible in some varieties. This is the time when you can cut to make the plant’s energies focus on the bananas.
After the banana harvest, the tree dies. The stem on the opposite side of the bunch of bananas will be engraved with a machete, the remaining part will then be cut from the rhizome, taking care not to damage the new suckers. Of these, only one will be left which will bear fruit the following year.
The others can be transplanted into new holes to make other trees. This operation must be done with care, intervening with fertilizer on the mother plant and then cutting off the apical part of the sucker in order to facilitate its rooting.
As far as pruning is concerned, this must be done when the mother plant has borne fruit, by pruning 60 cm from the ground: the new selected shoots will replace the dry ones. The three phases of the banana cycle are completed in:
– 6-8 months, for the vegetative phase;
– 3-4 months, for flowering;
– 3-4 months, for fruiting.
For the harvest it is necessary to wait 3-4 months for the first fruits.
As soon as the bunch is ripe, cut it, taking care to divide the bananas with soft material to prevent bruising.

Preparation Method –
In the Musa × paradisiaca, in addition to the raw or cooked consumption of fruits, like other banana trees, the male flower is edible and when cooked it has a taste similar to an artichoke. The stem is also edible and is used in India for many dishes.
In the Philippines, Banana Cue is commonly offered by street vendors. It is a snack obtained by frying bananas wrapped in caramelized brown sugar. A delight for anyone who loves sweet flavors.
Also in the Philippines, a condiment is used which is, in fact, a banana ketchup. It’s super easy to make and incredibly delicious. Just combine mashed banana, sugar, vinegar and spices. Banana ketchup is the perfect accompaniment to an omelette.
In England there is a banana dessert called Banoffee pie. It’s a tasty mix of bananas, cream and toffee, all set on top of a biscuit and butter base.
The Matsès and Shipibo, indigenous peoples of the Peruvian Amazon jungle, are the creators of a banana drink called Chapo. It is made with boiled sweet bananas, cinnamon and cloves.
In addition, in some cuisines, bananas and pork are an exceptional pairing. Tacaho is another dish from Peru; they are roasted bananas of the Amazonian culinary tradition, served with cecina and pork cubes. Sweet and savory create a tasty combination.
Furthermore, a flour is obtained from bananas. Historically, it was used in Africa and Jamaica as a cheap alternative to regular flour. However, it is now used as a gluten-free alternative to wheat flours and is a common ingredient in paleo recipes.
The banana is then put into the stuffed pastry. The Indonesians prepare the Nagasaris. They are traditional steamed rolls made with rice flour, coconut milk and sugar, then filled with banana slices.
Bananas are also great in soups. A hot banana soup is typical of Puerto Rico. Here a vegetarian banana soup is prepared flavored with paprika, cumin, coriander seeds and black pepper. It is then served with pan de Agua, a typical Puerto Rican bread, avocado, parmesan and parsley.