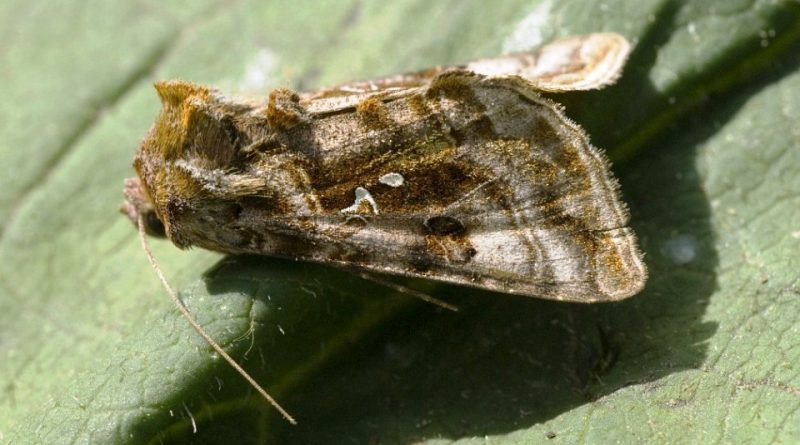 The Tomato Looper (Chrysodeixis chalcites Esper, 1789) is an insect belonging to the Noctuidae family.

Geographic Distribution and Habitat –
The Tomato Looper is a moth that is found in an area ranging from southern Europe, the Levant and tropical Africa, but is found in most of Europe because it is a migratory species. It has recently also been reported from North America.
The caterpillars of this moth feed on various herbaceous plants, such as Echium vulgare, Apium, Rubus (blackberry), but also tomato, Fragaria (wild strawberry) and Tobacco, with a preference for tomato and potato.

Morphology –
Chrysodeixis chalcites is a moth which, at the adult stage, is recognized for having reddish brown wings with intense golden dusting; characteristics are the two ovoid-shaped, silver-white spots of similar size. The apex is rounded. The hind wings are light brown surrounded by a cream-colored line. The wingspan is 35-40 mm.
The larva is up to 38 mm long, pale green in color, with a slight longitudinal stripe on each side, and with a green head. As for the other Plusiinae, the first two pseudo-legs are absent, for this reason it moves by arching.

Attitude and Life Cycle –
Chrysodeixis chalcites is an insect whose larvae feed on the leaf tissues and, when they reach maturity, weave a sparse white cocoon within which they become crystallized.
The species is migratory with nocturnal habits. Adults fly in the period between April and November with greater frequency between July and September.
This moth carries out 3-4 sedentary generations.
The larvae quickly attack and devour the leaves (but also shoots and fruits) of many species, completely denuding the plants in a few weeks.
The attacks are sporadic and are more frequent on tomatoes and potatoes.

Ecological Role –
Chrysodeixis chalcites is a prevalently nocturnal and polyphagous species, traceable in many environments.
In the case of significant infestations it can be controlled with pyrethrum-based products.
However, to reduce the intensity of infestations, it is advisable to resort to fewer crop specializations, more frequent rotation with unattached crops and agroecological techniques by increasing the biodiversity of the cultivated species.