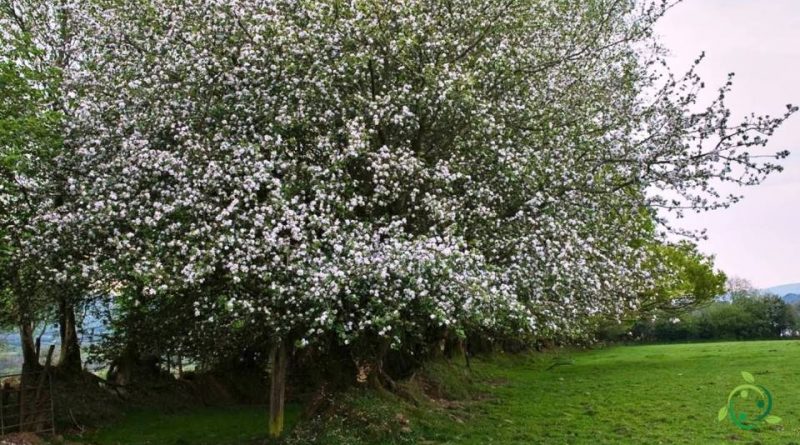 How the European crab apple is grown

The European crab apple (Malus sylvestris Mill., 1768) is a plant of the Rosaceae family native to the European continent and the Caucasus, where it is a component of the subthermophilous broadleaf formations (oak, downy oak, English oak, hornbeam, etc.) of the belt hilly and sub-montana.
The wild apple tree in Italy is widespread throughout the peninsula, except the Aosta Valley, from 0 to 800-1400 m above sea level.
This plant has hermaphrodite flowers gathered in inflorescences with 3-7 terminal and erect flowers; the flower peduncle is 1-3 cm long and hairy. % sepals and 5 petals, internally white or with pink spots, externally spotted with pink or red.
The fruit is a globular pommel 2-4 cm wide, first green, then more or less reddened. The core (pericarp) contains some smooth black seeds.

Cultivation –
Let’s see how the European crab apple is grown.
Malus sylvestris is a rustic plant that does not fear winter frosts, but is damaged by late frosts that damage its flowering. The plant is heliophilic and mesophilic and grows optimally in areas not too humid or too arid, usually as an isolated specimen in broad-leaved woods on the edge of clearings where it does not suffer from lateral competition.
From the pedological point of view it prefers a sandy or loamy, fertile and well-drained soil, with a pH close to neutral even if it can also vegetate on soils with an alkaline or sub-acid reaction, or even in periodically flooded stations, being a very adaptable plant to the various substrates.
The propagation of this plant is by seed which must be sown in spring after stratification during the winter months (alternating 2-4 weeks of aestivation to 12-16 of vernalization) or immediately after harvest, in autumn, benefiting from the high percentages of germination.

It can also be propagated through stump layering and self-rooting, a technique that is used to produce clonal rootstocks on which to graft varieties of sweet apple trees in difficult soils, even if in recent times the fruit apple is grafted more and more on specific rootstocks depending on of the characteristics to be obtained and of the cultivation substrates.
The cultivation of Malus sylvestris, as well as for food purposes, is useful for increasing biodiversity (as it is a plant very frequented by bees and pollinating insects) and to feed the local fauna with its otherwise unusable fruits; it can become part of mixed hedges (the presence of its thorns must be taken into account) together with, for example, wild pear, hawthorn, rowan, elder etc. Furthermore, due to its small size and beautiful spring flowering it is very suitable for small gardens both as part of English borders and as an isolated specimen surrounded by spring flowering bulbous plants or associated with a climbing rose. It is a slow growing plant.

Uses –
The European crab apple is the plant from which the domestic apple tree originated (Malus domestica Borkh.) It is a plant that can be used, as well as for rootstock to increase local biodiversity, for the constitution of shelter hedges for wild animals and to increase the availability of flowers for pollinating insects.