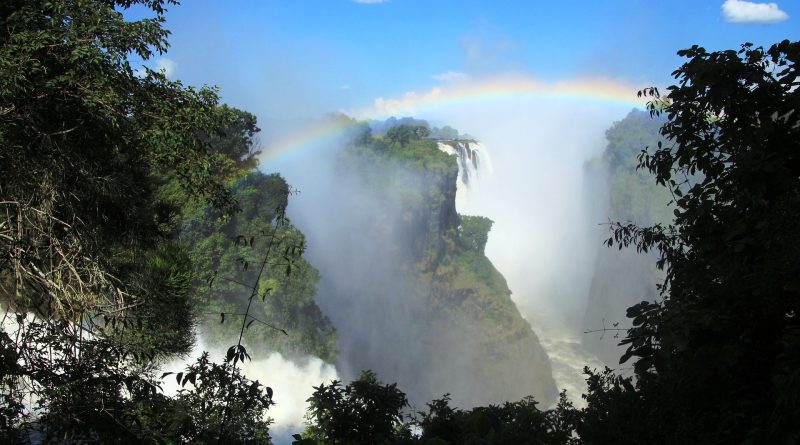 Zimbabwe is a state in southern Africa, located between the Zambezi River and the Limpopo River; it is landlocked and is bordered to the north by Zambia, to the east by Mozambique, to the south by South Africa and to the west by Botswana. Until 1979 it was known as Southern Rhodesia or simply Rhodesia.
This country has a population of 12,576,742 (2003), and has an area of ​​390,757 square kilometers; the capital is Harare, known until 1980 as Salisbury, with a population of 2,123,132 inhabitants (2012).

Geography –
Zimbabwe belongs to the Southern African region and is between the Limpopo and Zambezi rivers. This landlocked country has fairly frequent rainfall and abundant inland waters; with a good availability of water and a favorable climate for settlement, it can be said that the country has more hospitable geographical characteristics than those of many other African territories. Thanks to the special protection given to the precious and varied natural and animal environment, Zimbabwe has always been one of the most visited countries in Africa.
Zimbabwe has a rather uniform territory and consists of a part of the plateau between the Limpopo River (South) and the Zambezi (North). The highest peaks, which are located in the north and north-east on the Mavuradona and Inyangani ridges, slope down towards Mozambique without ever exceeding 2500-2600 meters in altitude. The territory is divided into three bands based on altitude: low Veld (0-700 meters), medium Veld (700-1200 meters), high Veld (higher altitudes). The territory of Zimbabwe is part of the continental plate of southern Africa and presents archaeozoic crystalline masses subsequently covered by sediments; due to the tectonic events affecting the portion of plate corresponding to the territory of Zimbabwe, a volcanic activity developed which in turn caused the formation of diamond deposits, very numerous throughout the country.
As for hydrography, the main river is the Zambezi, which acts as a border with the neighboring state of Zambia; it feeds the Kariba hydroelectric basin and gives life to the Victoria Falls. Its main tributaries are the Gwayi and the Sanyati. To the south, the Limpopo, which originates in the Upper Veld, marks the border with the South African region of Transvaal.

Climate –
The climate of Zimbabwe is tropical as it has two seasons, one dry from April to October (southern winter), the other rainy between November and March (southern summer). The temperature varies according to the altitude range, so there are very low temperature variations in the upper and middle Veld, while there is an accentuation in the difference between winter and summer temperatures in the lower Veld; the annual rainfall is held on an average of 700 mm. 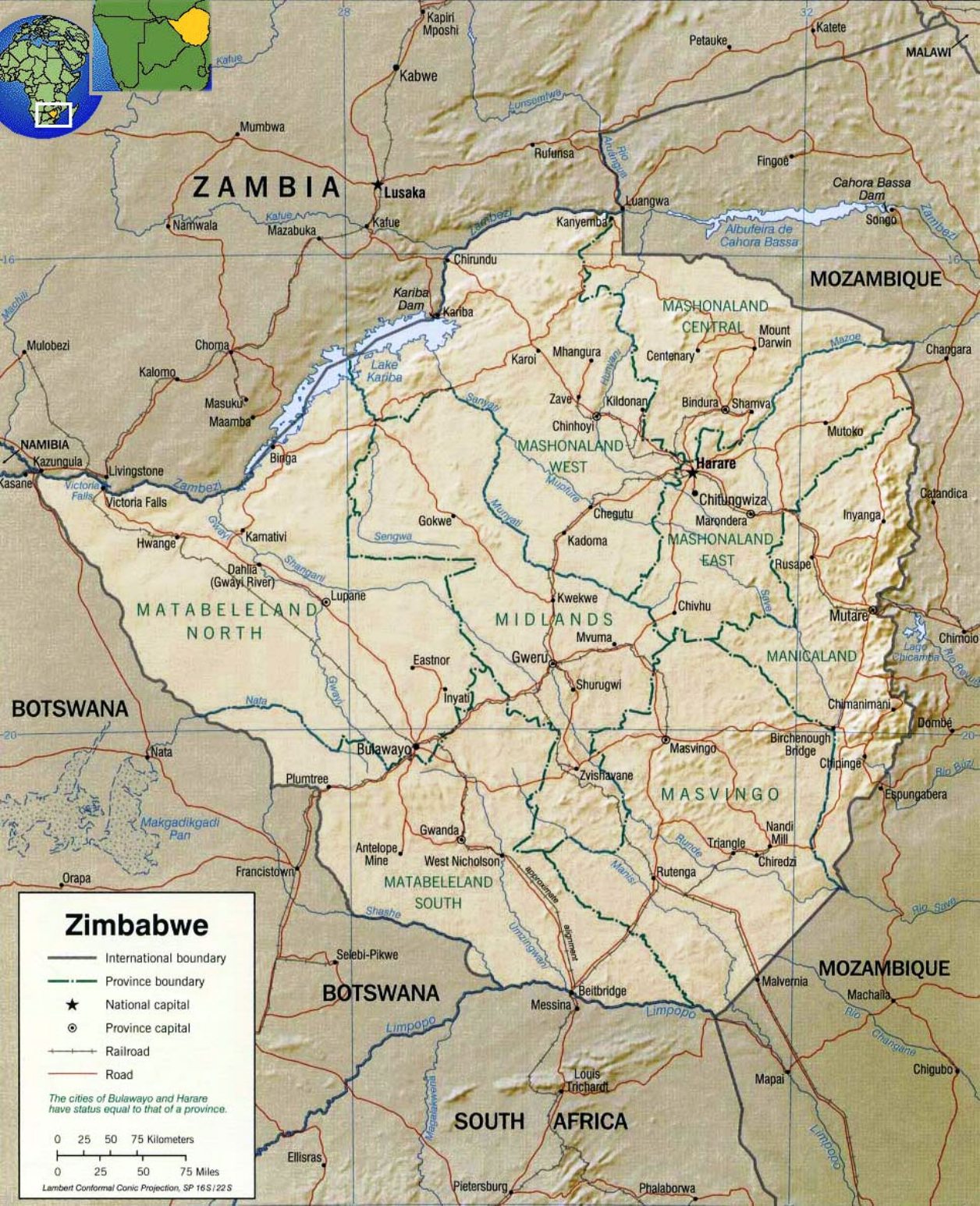 Flora-
In 2005, 14.5% of the territory was totally or partially protected. The vegetation is mostly made up of sparse deciduous forests (tree Veld) and in the part with less rainfall from the savannah in which acacias and baobabs prevail. Along the Zambezi there is the gallery forest.
In this country, environmental protection has been a distinctive feature of the Rhodesian government since the 1920s. Over time, nine reserves and one national park have been established (Hwange National Park, 1,456,000 hectares, opened in 1949). Later the reserves were also transformed into national parks. In 1975, a new law was passed which established new types of protected areas such as botanical reserves, sanctuaries and safari areas. Following the socio-political upheavals that began in the 1980s, the care and protection of the environment took a back seat. The same accommodation facilities have suffered a depression, given the difficulties of environmental management. The management of the protected areas is entrusted by law to the Ministry of Natural Resources and Tourism.
The ten national parks in the country are:
– Chimanimani National Park;
– Chizarira National Park;
– Gonarezhou National Park;
– Hwange National Park;
– Kazuma Pan National Park;
– Mana Pools National Park;
– Matobo National Park;
– Matusadona National Park;
– Nyanga National Park;
– Zambezi National Parks (also known as Victoria Falls National Park).
In Zimbabwe the most beautiful representative of the plant kingdom is the sausage tree: this plant takes its name from its huge brown sausage-shaped fruits, which can grow up to one meter in length and eighteen centimeters in diameter. The fruit is highly valued by antelopes, but dried and transformed into a paste it is used as an ointment: the cream obtained from this process is becoming very well known internationally as a cure for basal cell carcinoma, a type of skin cancer that arises with aging and prolonged sun exposure. Look for it in drugstores if there are any spots.
In Zimbabwe the lowlands are devoid of vegetation (called ‘low veld’). The predominant vegetation is that of the mountain prairie, with species variations depending on the altitude. The most peculiar feature of the ecoregion is that of presenting large patches of evergreen humid forest, residuals of the ancient montane forest that extended in the elevated areas of Africa from the Drakensberg to the forests of the Eastern Arc and dependent on the humidity brought about by rainfall. : for this reason they are more frequent on the eastern side and in the deepest valleys (Nyanga and Chimanimani mountains). The canopy of these forests reaches 40–55 m in height, with a known exceptionality represented by the “big tree” of the Chirinda forest: a giant Khaya anthotheca that stands 65 meters high. A second type of forest, mountainous and dry, is more widespread in the ecoregion: in this case the vegetation depends on the humidity of the subsoil and not only on rainfall; it is found at greater heights, between 1,500,2,000 m and the upper level of the canopy stops at 12–15 m. Epiphytes and lithophytes are ubiquitous. Occasionally there are patches of miombo, in the most drained areas of the higher slopes of the range.
Unfortunately, the fertile valleys are increasingly occupied by the advance of human settlements, in search of good agricultural land.
The area is very at risk, following the expansion of anthropogenic activities related to agriculture: the valleys are very fertile, well irrigated and the slopes of the hills are suitable for the cultivation of tea and coffee, as well as for breeding. of dairy cattle. At the edge of the forested area, some invasive alien species (Lantana camara, Caesalpinia decapetala, Acacia mearnsii and eucalyptus) are gaining more and more space for native species. Finally, the poaching of some species of herbivores and the illegal harvesting of wood for the production of charcoal complete the picture of the risks to which this ecoregion is subject. Three conservation areas are included in the ecoregion area: Nyanga National Park and Chimanimani National Park in Zimbabwe and Chimanimani National Reserve in Mozambique.

Fauna –
Zimbabwe is a country rich in fauna; among these we remember: elephants, buffaloes, lions, cheetahs, hyenas, jackals, monkeys and antelopes and many others that roam the national parks grazing, chewing noisily, mating and lazing. Some of these species are unique or live in small groups also in other parts of the planet: among these the rare nyala, the king cheetah and the white-throated vervet deserve a mention. Zimbabwe is also one of the last countries in Africa where black and white rhinos can still be seen, present in small herds.
However, the ecoregion does not present particular endemics, but rather hosts rare species, which once lived in the continuum of the African mountain forest while now they are confined to isolated areas that still have the same habitat. These include the diademic vervet (Cercopithecus mitis), the African palm owl (Nandinia binotata) and the squirrels Heliosciurus mutabilis and Paraxerus palliatus. An uncommon species of fruit-eating bat is also found, Myonycteris relicta. Leopard specimens have also been identified, which prey on some species of herbivores that live in prairies and heaths: the saltarupe (Oreotragus oreotragus), the eland (Taurotragus oryx) and the Cape hyrax (Procavia capensis); among them the yellow baboon (Papio cynocephalus) also proliferates. The birds are numerous and present a good differentiation of species from the hornbill (Bycanistes bucinator), to the green turaco of South Africa (Tauraco corythaix) and to the species that we remember the guinea fowl hens Guttera pucherani. Butterflies are abundant and characteristic of the ecoregion, particularly after the rains. Reptiles and amphibians are present with numerous species living in the forest (snakes, geckos, frogs, toads and lizards), in some cases (six amphibians and eight reptiles) are endemic.