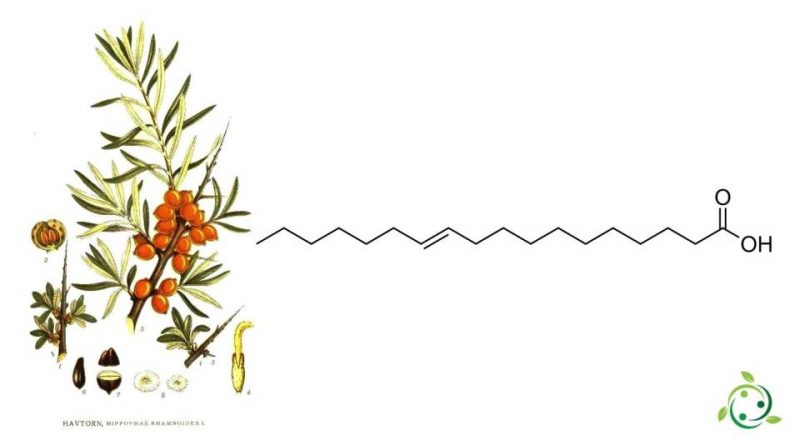 Vaccenic acid, whose term in the official IUPAC nomenclature is: 11E-octadecenoic acid is an 18-carbon fatty acid with a brute or molecular formula: C18H34O2.
Vaccenic acid was first identified by S.H.Bertram in 1928 and was the first demonstration of the presence of trans isomers in ruminant fats, particularly in cow’s milk, hence the name.
Vaccenic acid is formed as an intermediate during the biohydrogenation of linoleic acid to stearic acid by the work of Butyrivibrio fibrisolvens and other rumen bacteria.
Rumenic acid, cis9 trans11 conjugated linoleic acid, is obtained from vaccenic acid by enzymatic action.
Vaccenic acid Vaccenic acid is also present in the cis form, also known by its name: asclepic acid with a melting temperature of about 15 ° C. In particular, the cis stereoisomer is present in the horse’s brain where it has a haemolytic action and in some vegetable oils such as Macadamia or Sea Buckthorn, Hippophae rhamnoides, which can contain even more than 2%.
Unlike the cis form, the trans isomer, with a melting temperature of about 44 ° C, is not normally present in vegetable oils.
Vaccenic acid is also found in the human orbitofrontal cortex of patients with bipolar disorder and schizophrenia.
To date, no apparent association between vaccenic acid and cardiovascular disease has been demonstrated in epidemiological studies. In contrast, elaidic acid, the industrial trans isomer of oleic acid, has been associated with an increased risk of cardiovascular disease.

Limited evidence from animal models and human studies indicates that vaccenic acid does not have a negative impact on cardiovascular biomarkers, including C-reactive protein. In a 6-week study among healthy middle-aged men, dairy products enriched with vaccenic acid did not have a significant effect on cardiovascular risk factors and blood lipid profile.
The effects of vaccenic acid itself on cancer are also unclear. Epidemiological studies have produced contradictory results. For example, some studies have shown a direct association between vaccenic acid and reduced cancer risk, such as breast and prostate cancer, while others have found no associations.
Most studies of vaccenic acid in animal models and tumor cell lines have shown a beneficial reduction in cell growth and / or tumor metabolism.
Finally, with regard to immune function and inflammation, vaccenic acid has shown uncertain action.
Short-term human trials have shown that vaccenic acid does not appear to affect markers of inflammation, phagocyte function or phenotypes of circulating immune cells.
Data from some short-term animal studies indicate that vaccenic acid may have a positive influence on the immune response. However, the health benefits could come from long-term consumption of vaccenic acid. In a 16-week study involving rodent models, a diet enriched with vaccenic acid significantly improved immune function.