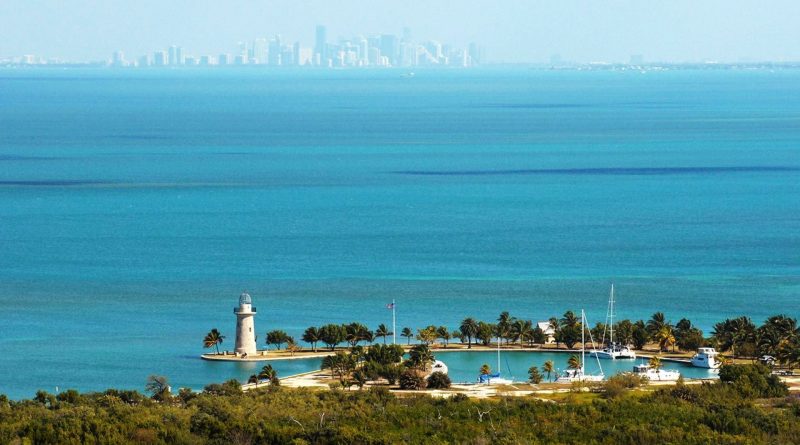 Geography –
Biscayne National Park is located in Miami-Dade County in southeastern Florida. It extends from Key Biscayne, southwards, to just north of Key Largo; the park includes Soldier Key, Ragged Keys, Sands Key, Elliott Key, Totten Key and Old Rhodes Key, as well as smaller islands that make up the northernmost extension of Florida. The eastern boundary of the park is the ten-fathom (18m) deep line of water in the Atlantic Ocean on the Florida Reef. The western boundary of the park is a fringe of property on the mainland, extending several hundred meters inland between Cutler Ridge and Mangrove Point. The only direct access to the park from the mainland is at the Convoy Point Visitor Center, adjacent to the park headquarters. The southwestern border borders the Turkey Point nuclear generation station and its cooling channel system.

Geology –
Biscayne Bay marks the southernmost extension of the Atlantic barrier islands, represented by the municipality of Key Biscayne, and the northernmost extension of the Florida Keys at Elliott Key. The Keys are distinguished from the barrier islands by the coral limestone that extends to the surface of the islands under a thin veneer of loam, while the barrier islands are dominated by wave-deposited sands that cover most of the limestones.
Biscayne Bay sits between the low ridges of Miami Oolithic Limestone to the west, forming Cutler Ridge, and the coral-based Key Largo Limestone that lies at the base of Elliott Key and the Keys to the south. The Miami Limestone was deposited in the turbulent waters of the lagoon. The Key Largo limestone is a fossilized coral reef that formed during the Sangamonian phase approximately 75,000 to 125,000 years ago. The Miami Formation reached its current form a little later, during a glacial period in which fresh water consolidated and cemented the lagoon deposits.
Key Largo limestone is a coarse stone made up of hard corals, with a thickness between 21 and 61 m. As a result of their origins as cliffs, the beaches of Elliott Key and Old Rhodes Key are rocky. Significant sandy beaches are found only on Sands Key.
Biscayne Bay is a shallow, semi-enclosed lagoon that has an average depth of 3.0m. Both its continental margins and the keys are covered by the mangrove forest. The park encompasses the southern part of Biscayne Bay, with areas of thin sediment called “hardbottom”, and algae meadows with vegetation that support turtle grass and dry grass.
The result of efforts to control water resources in Florida and projects to drain the Everglades during the early and mid-20th century altered the flow of water in Biscayne Bay. These channels convey water from portions of the Southeastern Everglades now used for agriculture in the bay. Prior to the canal’s construction, most of the freshwater inflow came from rain and groundwater, but now the canals are altering the bay’s salinity profile, channeling sediments and pollutants, and leading to saltwater intrusion into the bay. Biscayne Aquifer. The Everglades Comprehensive Restoration Plan (CERP) was established in 2000 to mitigate the effects of human intervention in the natural water flow of the Everglades. Primarily aimed at restoring historical patterns of water flow in Everglades National Park, the project will also address the problems arising from the diversion of water from the Southern Everglades into Biscayne Bay.
The Biscayne Bay Coastal Wetlands Project (BBCW) is a component of the CERP specifically intended to redistribute water flow so that fresh water is gradually introduced through streams and marshes rather than short, heavy drains through drainage channels. 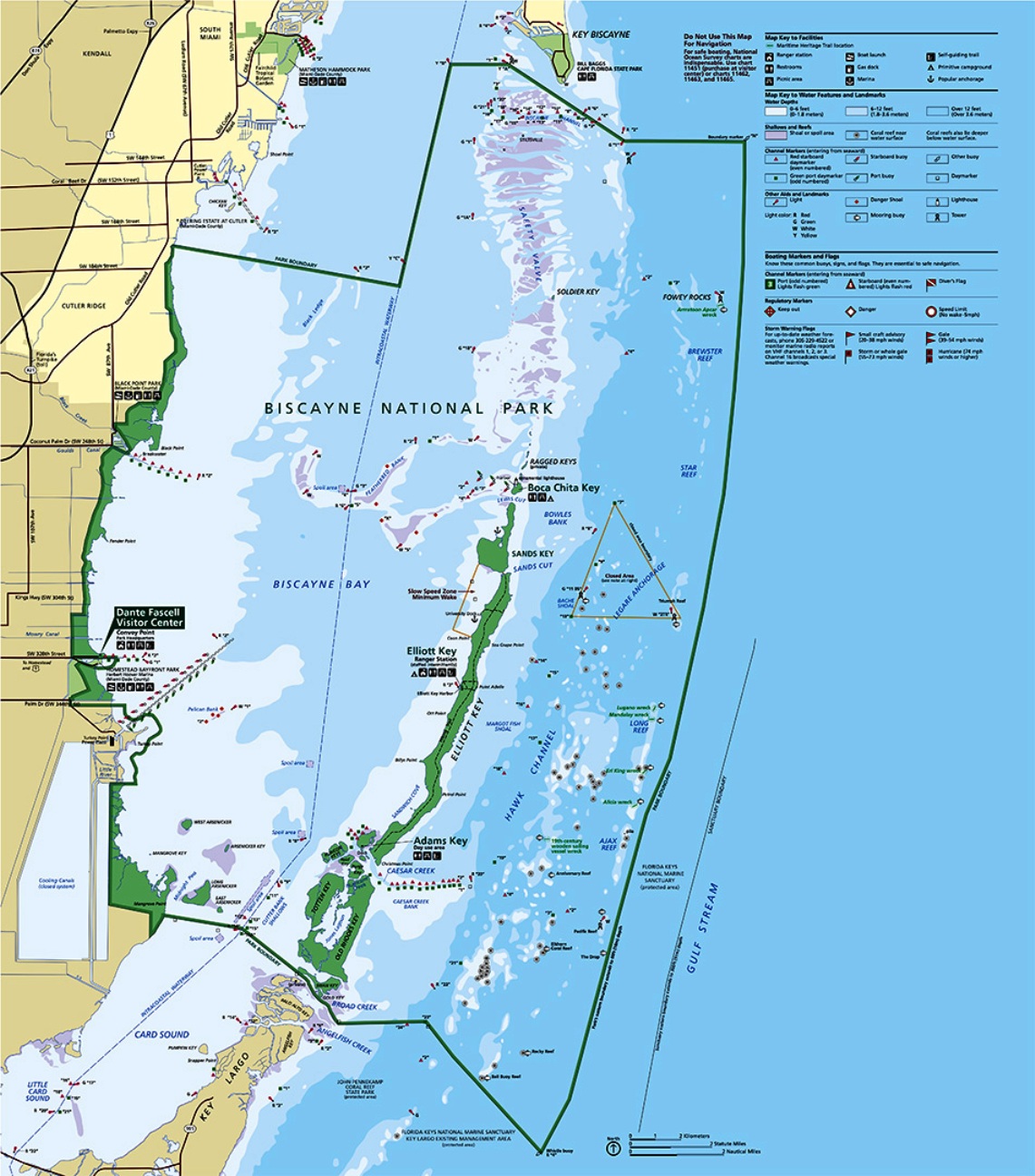 Climate –
Biscayne’s tropical climate reflects its location in far south Florida. Southern Miami-Dade County is classified as having a tropical savannah climate in the Köppen-Geiger system, with the park bordering a tropical monsoon climate.
Here the seasons can be divided into dry, from November to April and wet season from May to October. The temperatures of the dry season are on average between 19 and 24 ° C, with an average monthly rainfall of 53 mm. The temperatures of the rainy season average between 24 and 29 ° C, with an average monthly rainfall of 137 mm. The rainy season roughly coincides with the hurricane season, with frequent thunderstorms.
Like many locations in South Florida, Biscayne National Park is hit by hurricanes every few years. Most thunderstorms require temporary closures and occasional repairs to park structures. A direct hit from a powerful hurricane can have serious consequences, mainly due to its impact on human interventions rather than the park’s natural environment, which is well adapted to these events.
Additionally, the park may be affected by wave action from more distant tropical storms such as Hurricane Sandy in 2012, which damaged Elliott Key structures.
Since all areas of the park are no more than a few meters above sea level, they are vulnerable to sea level rise. Park Service studies predict that much of the park’s surface will be lost over the next two hundred years. Sea level in Biscayne Bay is expected to rise between 8 and 18cm by 2030 and between 23-61cm by 2060.
A sea level rise of 8 to 15 cm is expected to increase the intrusion of salt water into the Biscayne aquifer. Higher rises will make the Southern Everglades a saltwater swamp, altering the region’s ecology.

Flora –
Biscayne National Park is made up of four primary ecosystems:
– a fringe of mangrove forest along the mainland coast;
– the southern expanse of Biscayne Bay;
– the northernmost keys of Florida;
– the northernmost part of the third largest coral reef in the world.
Each unique ecosystem is made up of a community of organisms along with their physical environment. Each ecosystem in the park, like all ecosystems, is interconnected and is made up of living and non-living beings.
Hundreds of different plant species can be found in the park, including plants that grow underwater such as seagrasses. Some of the most interesting plants are mangroves, and one of the longest continuous stretches of mangrove left on Florida’s east coast is protected in Biscayne.
Here too, some of the world’s last populations of rare and endangered species are protected, such as the Florida traffic light cactus and the buccaneer palm, considered the rarest palm native to Florida.

Fauna –
The park is home to an incredible diversity of life including over 600 native fish, neotropical waterfowl, and many threatened and endangered species including sea turtles, manatees and the Schaus swallowtail butterfly.
The park preserves a unique marine habitat and farming environments that support diverse native fish resources and support world-class fishing for lobster, snapper, grouper, tarpon and bonefish.