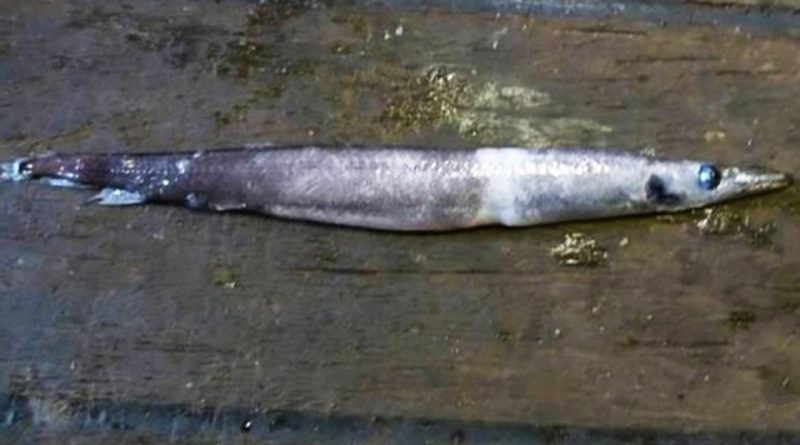 Geographic Distribution and Habitat –
Sharpchin barracudina is a bathypelagic and dromous ocean fish that lives in the North Atlantic Ocean and the Mediterranean Sea at a depth of 50–600 meters and, occasionally, below 1,000 m.
The species is occasionally reported in all Italian seas.

Description –
Paralepis coregonoides has a slender and elongated body, up to 30 cm long, but can reach up to 50 cm, with delicate skin, completely covered with deciduous scales. In the Mediterranean, however, it does not exceed 25 cm.
Along the lateral line there are 57-61 sections provided with an upper and a lower pore, in correspondence with the scales that are superimposed.
It has a large, pointed head that is almost a quarter of the length of the body.
The eye is large and circular, with a posteriorly developed adipose eyelid. The nasal openings are two, small and placed in a dorsal-lateral position.
The mouth is wide and long and the apex of the upper jaw covers the mandibular apex.
The teeth on the premaxillaries consist of an anterior series of tiny folding canines followed by other fixed ones. The mandible bears two sets of small teeth, partly fixed and partly folding.
The dorsal fin originates in an advanced position with respect to the ventral ones, the adipose above the last rays of the anal.
This fish has a pale pink coloration with black pigment on the head, on the back and at the base of the caudal fin.

Biology –
Paralepis coregonoides is a batipelagic species that reproduces throughout the year but with a longer period between March and September.

Ecological Role –
Paralepis coregonoides feeds on Maurolicus muelleri, larvae of sardines and crustaceans.
In turn, it preys on tuna, cod, lancet, Atlantic salmon and seals.
This fish is occasionally caught with pelagic nets.