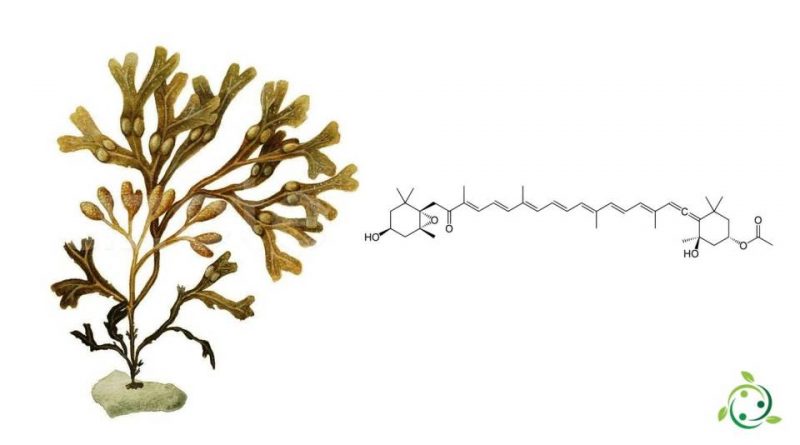 Fucoxanthin is a natural molecule and a carotenoid (therefore a vegetable pigment) typical of brown algae.
Lower amounts of fucoxanthin are also found in some red and green algae.
Fucoxanthin has a brute or molecular formula: C42H58O6, which gives the characteristic color, overlapping the green shades of chlorophyll. Fucoxanthin absorbs light primarily in the blue-green to yellow-green range of the visible spectrum, peaking around 510-525 nm and absorbing significantly in the range of 450 to 540 nm.
Metabolic and nutritional studies conducted in mice at Hokkaido University indicate that fucoxanthin promotes fat burning within white adipose tissue cells.
According to a double-blind, placebo-controlled human study with algae extract containing fucoxanthin in combination with pomegranate seed oil, an average weight loss of 4.9 kg was shown in obese women over the course of a period of 16 weeks.
The concentration of fucoxanthin in algae, including browns, is however much lower than the doses used to investigate their functional characteristics in animals.
To reach such quantities, it would in fact be necessary to take these foods in doses that make them toxic, due to the large amount of iodine ingested and the consequent risk of hyperthyroidism; Furthermore, we must not forget the numerous reports according to which algae and derived products are in real danger of arsenic contamination.
Beyond this and their fucoxanthin content, algae are still an excellent source of iodine (which at appropriate doses is essential to stimulate thyroid activity and basal metabolism) and alginic acid (a polysaccharide that increases the density of gastric contents, stimulating the sense of satiety and acting as a mild mass laxative).
Although the mechanism of action of fucoxanthin is not yet fully known, recent experimental evidence suggests a particularly complex biological role.
More precisely, fucoxanthin would exert:

– a direct antioxidant activity, acting as a scavenger of oxygen free radicals;
– an anti-inflammatory activity, effective in reducing the concentrations of inflammatory cytokines such as TNF-alpha and PGE2, normally involved in the genesis of the inflammatory process;
– an antiobesigenic activity, probably linked to the ability of fucoxanthin to control the activity of PPAR gamma upstream and of thermogenins downstream.
These two proteins, also known as UCPs or uncoupling proteins, are normally expressed in brown adipose tissue, a type of fat that is poorly represented in humans.
With their activity, these proteins seem to contribute to the dissipation of energy obtained from fats, in the form of heat; they would therefore be the basis of an innate defense mechanism of the human body from excess fat and cold.
An antitumor activity, observed in some preliminary studies on cell cultures, and largely linked to the ability to regulate the rate of proliferation – differentiation of these clones.
However, at present, the main use of fucoxanthin is mainly oriented towards the management of obesity.
Among the side effects it should be remembered that, despite the correct use of fucoxanthin was generally well tolerated, it would be appropriate to remember the potential side effects, both of a metabolic and toxic nature, related to the possible ingestion of foods containing fucoxanthin in large quantities.
These effects are attributable to the massive presence of iodine, which – if taken in excess – disturbs the thyroid and can cause some forms of hyperthyroidism.
Furthermore, the use of fucoxanthin during pregnancy and the subsequent breastfeeding period, as well as in children, should be avoided.
Close medical supervision, while using fucoxanthin, would be necessary in patients suffering from various types of pathologies or undergoing concomitant drug therapy.
Finally, the use of foods containing fucoxanthin could bring large amounts of iodine, with possible metabolic consequences.