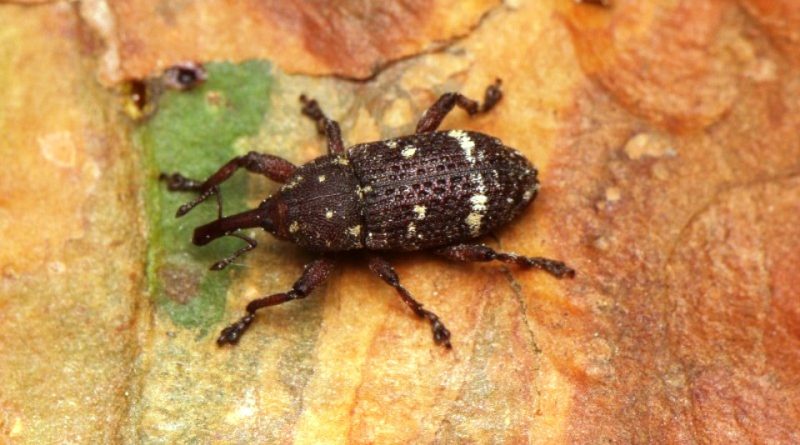 The Pine weevil or Pissode del pino (Pissodes pini, Linnaeus, 1758) is a beetle belonging to the Curculionidae family.

Geographic Distribution and Habitat –
The pine weevil is a species native to Europe where it is present in all the localities where the Pinus sylvestris is present. In the east it is widespread as far as western Siberia. In addition to the Scots pine, it also attacks the Pinus strobus and the Pinus cembra.

Morphology –
The adults of the Pissodes pini have a length of about 5-8 mm, with a cylindrical body and typical elongated buccal rostrum.
The color is brown-hazel, with yellow-ocher spots and transversal streaks, on the elytra.
The larvae are whitish with an orange front and live inside the wood.

Attitude and Life Cycle –
The Pissodes pini hibernates as a larva, or as an adult and in certain environments it also survives for some years.
After that, the adults are carried on the host plants or appear in the period from spring to all summer.
The period of maximum oviposition, which occurs under the rind, occurs at the beginning of summer, although the depositions can last for a longer period depending on the seasonal trend.
The young newborn larvae immediately begin to dig the described tunnels.
The Pissode therefore completes one generation per year but, in favorable climatic conditions, it can reach two.
The adults cause erosions on the young bark of the branches.
The larvae are xylophagous and dig tunnels in the cortical area of ​​the woody organs, also affecting the cribroso tissue. These galleries take a longitudinal or ascending course, up to the scaffolding of the branches or the branching of the 2nd order branches, or descending, stopping at the collar.
In any case, when mature, these larvae dig a niche in the wood and pupate. As with other wood-boring beetles, these insects usually attack plants that are already weakened or wasted.
The plants react to the attack with redness, necrosis of the needles and phylloptosis; the foliage is dried out and empties starting from the innermost part.
In case of massive attacks the plants succumb in a short time.

Ecological Role –
The fight against Pissodes pini is of an agronomic preventive type.
In this sense it is good to keep the plants in a good physiological and phytosanitary state; moreover, for the specimens of gardens and public parks it is advisable to constantly prune the rimonda, to remove the dry parts or the weakened parts which represent an excellent substrate for these pests.
To this we must add some application principles of agroecology with the choice of species that are suitable for the pedo-climatic characteristics of the area in order to avoid a lower resilience of the planted species and possible massive attacks.
Furthermore, the maintenance of optimal ecological conditions, such as the non-use of biocides of various kinds, favors natural predators, especially birds, especially Woodpeckers.