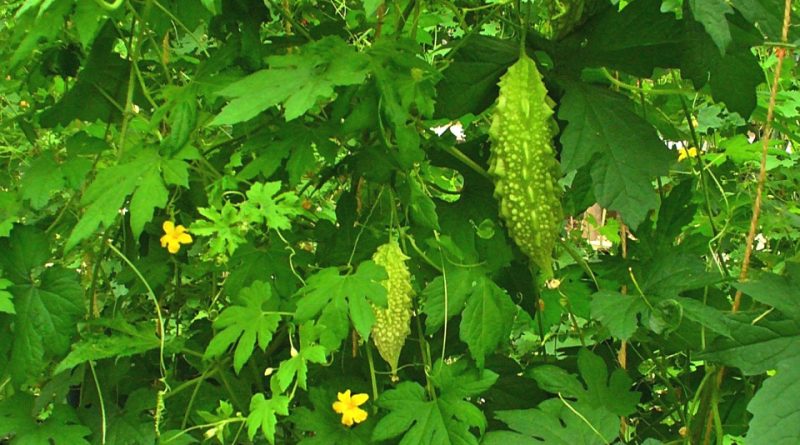 The Balsam Pear (Momordica charantia L., 1753) is a climbing herbaceous species belonging to the Cucurbitaceae family.

Etymology –
The term Momordica comes from momordi, past of the verb bite to bite: for seeds with eroded margin as if they had been bitten.
The specific charantia epithet comes from the ancient Italian name caranza as it is easy to arrange this pergola plant; term derived from the Greek χάραξ chárax support pole, reed.

Geographic Distribution and Habitat –
Balsam Pear is a tropical and subtropical plant of uncertain origin, although it is possible that it is Africa or India; it is particularly widespread in Asia and Africa for its fruits and leaves, which are edible, but it is also possible to find it in Australia and in the Pacific islands.
Its natural habitat is that of the savannah and is common in coastal thickets, along streams and streams and on the edges of lowland forests. 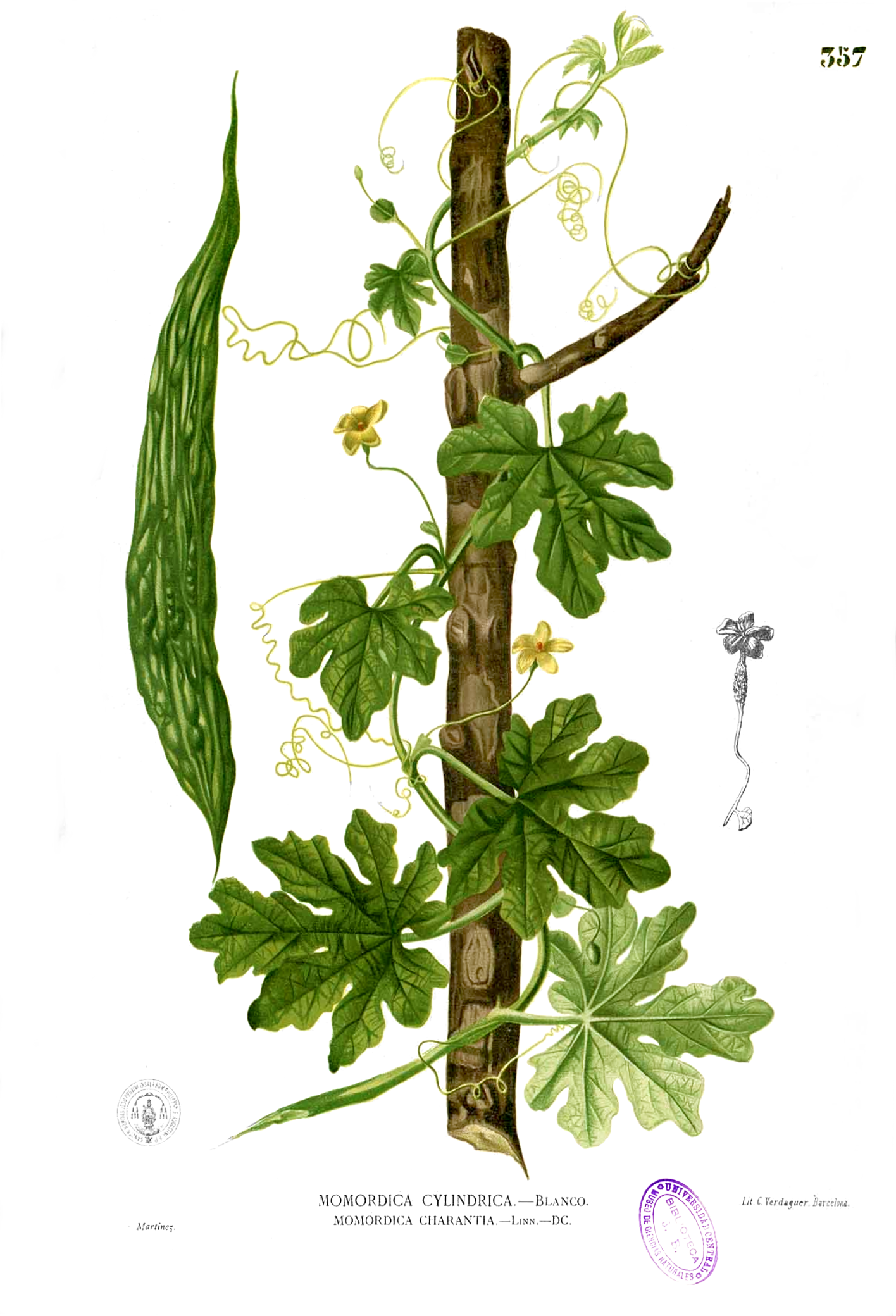 Description –
Momordica charantia is an annual herbaceous plant that can grow up to a height of 5 meters.
It produces very branched stems that propagate on the ground or climb into the surrounding vegetation, supporting themselves by means of tendrils.
The leaves are simple and alternating, differently lobed depending on the variety.
The flowers are monoecious of a pale yellow to intense yellow color, solitary at the upper axil of the leaves on 2-10 cm long stems with a small leaf bract towards the base. Male flowers are larger than female flowers and have a subtle basal bulge ending in five blunt sepals. There are five 10-20 cm long oval yellow petals and five central stamens.
The fruits are cylindrical in shape, pendulous and are egg-shaped and 2-10 cm long (up to 20 cm in the cultivated varieties), and covered with longitudinal ridges and warts. When ripe they turn from orange to yellow, and the tips divide into three and come back to reveal the yellow pulp and bright red arils that enclose the seeds that adhere to the inside of the fruit. Each of the flattened woody seeds is 5-9mm long and has finely pitted surfaces.

Cultivation –
Momordica charantia is a very vigorous annual climbing plant which is an important market vegetable in South and East Asia; it is also cultivated on a small scale in tropical America and in the southern part of the United States. The plant is also grown for medicinal purposes.
The plant adapts best to the warm and humid areas of the tropics and subtropics, although it can be grown in a wide variety of climates up to the temperate zone as long as there is a sufficient growing season; it can also be grown at altitudes of up to 1,000 meters in the tropics.
In general it grows best in areas where annual daytime temperatures are between 22 and 30 ° C, but can tolerate 15 – 38 ° C.
The growing plant can survive temperatures up to about 3 ° C.
It prefers an average annual rainfall in the range 2,000 – 2,500 mm, but tolerates 1,000 – 4,000 mm.
It grows best in a sunny position and requires a soil rich in organic matter, if optimal yields are to be obtained, with a pH in the range of 6 – 6.5, tolerating 4.5 – 8.
Plants can start flowering in 30 – 35 days after germination and start producing fruit about 15 – 20 days later.
In more temperate climates, the crop cycle can be completed in 50-70 days, but the harvesting period can last for 70-85 days. The plant needs support for growth, similarly to other Cucurbitaceae.
Yields of up to 15 tons per hectare have been achieved, although 8-10 tons is the most ordinary yield.
There are also several varieties.
Propagation occurs by sowing in situ and the seedlings emerge 5-7 days after sowing, but the fresh seed often shows a dormancy that is very difficult to overcome and can last for a few months.

Customs and Traditions –
Momordica Charantia is an edible plant that grows mainly in Asia and Africa, but it can also be found in other areas.
It is harvested before it reaches complete ripeness, since in this way its very bitter taste, typical of fully ripe fruit, is reduced. The fruits halfway between the pumpkin and the courgette, are consumed cooked in many variations.
Momordica Charantia is famous for its priceless properties and for the considerable amount of micro and macro nutrients it contains and for the benefits it gives by taking it.
The fruit, leaves and seeds are very nutritious and contain phosphorus, iron, calcium, vitamins A, B and C, beta carotene and potassium. It is widely used in Ayurvedic medicine and some studies claim that, thanks to a substance it contains called polypeptide-P, it has effects similar to those of insulin, thus regulating blood sugar levels in diabetics.
The young shoots and leaves are cooked and used as a vegetable.
For this reason, it is a popular leafy vegetable that is considered very healthy.
A red food coloring can be extracted from ripe fruit.
From a medicinal point of view, Momordica Charantia is a laxative and diuretic herb that soothes irritated tissues, lowers fever, kills parasites and purifies the system of toxins.
It is also likely a uterine stimulant.
The plant contains anti-leukemic, estrogenic and hypoglycemic chemicals.
The semen contains abortive proteins; the glucoside steroid charantine, which has an insulin-like hypoglycemic activity.
The seeds contain glycoproteins with abortive, immunosuppressive and antitumor activity.
Ripe fruit is a stomach tonic and induces menstruation.
The fresh juice of the fruit is taken internally in the treatment of colitis and dysentery.
The unripe fruit contains an insulin-like peptide that has been shown to lower blood and urine sugar levels. It is traditionally used to treat the symptoms of diabetes, especially late diabetes.
The fruit is used to treat leprosy and malignant ulcers; to treat gastric worms, fever and phlegm; hypertension and dysentery. It is also used externally in the treatment of hemorrhoids, cracked skin and burns.
The leaves are antiseptic, blood purifying, febrifuge and vermifuge.
The root is abortive and astringent.
The plant is still little known in Italy but the virtues and benefits of Momordica Charantia, as seen, are truly numerous; this plant with bitter fruits in fact has a powerful antidiabetic action, regulates the intestine, eliminates toxins from the body, has an antitumor action and is extremely rich in vitamins, mineral salts, proteins, flavonoids and many other very important substances for well-being of our body.
This natural remedy was discovered millennia ago and many peoples, such as the Chinese, Indians and Africans, have always used it for its healing properties.
Furthermore, Momordica Charantia can be taken as a supplement to benefit from all its properties quickly and very easily.
Furthermore, according to some studies carried out by the Mahidol University of Bangkok, within the Mormodica Charantia there are also some proteins (MRK29) capable of inhibiting the replication of the polio virus and HIV.

Preparation Method –
The Momordica Charantia fruit is harvested when it is not yet ripe and used fresh as pulp or juice.
The immature fruit is soaked in salted water to remove the bitter taste, and then cooked like a vegetable.
They can also be used in curries and pickles.
The forms with non-bitter fruits are eaten in salads, in the same way as cucumbers.
The seeds of the ripest fruits must be removed.
The leaves can be harvested during the growing season and can be used fresh or dried for later use.
A bitter gourd tea, made from pieces of dried fruit, is a popular health drink in Japan and other Asian countries.
An infusion is used in the treatment of intestinal worms, jaundice, malaria and other fevers.
A decoction of the leaves and stems is used to treat diabetes, hypertension and biliousness.
The juice from the leaves is applied externally to treat inflammation, scabies, and itchy skin.
A leaf paste is applied as a poultice to cuts and wounds.
The leaves are used to make an antiseptic bath for children.
A decoction of stems, leaves and fruits is used as a bitter tonic and to treat diabetes and cancer.
A decoction of flowers and leaves is used to treat hepatitis.
The oil obtained from the seeds is used to help heal wounds.