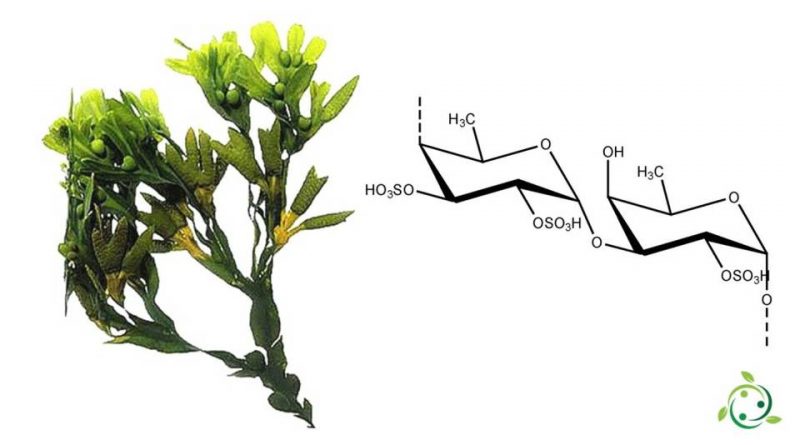 Fucoidan whose term in the official IUPA nomenclature is: (2S, 3S, 4S, 5S, 6R) -4-hydroxy-5-methoxy-2,6-dimethyltetrahydro-2H-pyran-3-yl hydrogen sulfate, is a polysaccharide long chain sulfate with molecular formula: (C6H9O3SO3) n.
In its natural state, fucoidan is a crystalline solid.
This polysaccharide is found in various species of brown algae and the commercially available one is commonly extracted from algae species such as: Fucus vesiculosus, Cladosiphon okamuranus, Laminaria japonica and Undaria pinnatifida.
Variant forms of fucoidan have also been found in animal species, including the sea cucumber.
Fucoidan is found in the cell walls of algae and serves to protect them from external stresses. The same protective benefits that are of value to the algae plant have also been shown to be of potential benefit to human and animal health. Fucoidan extracts are used in a range of health therapeutic preparations, being incorporated as high value ingredients in nutritional products, medical devices, skin care and dermatology products.
Seaweed containing fucoidan has a rich history of medicinal and therapeutic uses. The earliest documents have been unearthed at Monte Verde in Chile, where archaeological excavations have unearthed evidence of their use dating back to around 12,000 BC.
Therapeutic use was also evident in the ancient Greek and Roman civilizations.
In the 17th century, the English botanist John Gerard noted the use of algae to treat a wide variety of ailments.
Fucoidan was only isolated and described in the early 1900s. In 1913, Swedish Professor Harald Kylin was the first to describe this slimy substance found on many algae.

Research later, in the early 20th century, focused on extracting crude extracts and revising some conflicting views on fucoidan.
Methods of extraction and isolation of fucoidan from brown algae have been determined on a laboratory scale by authors at the Institute of Seaweed Research in the UK.
Subsequently, once fucoidan became commercially available since the 1970s, studies and research on this substance also expanded.
Anti-cancer effects were among the first to be reported by Japanese researchers, followed by effects on immune modulation and then anti-tumor, antiviral and anti-inflammatory responses.
Today, fucoidan continues to be used as a complementary therapy in many parts of Asia, particularly Japan and Korea, where it is not uncommon for it to be recommended to patients being treated for cancer. The interest and use of fucoidan is growing rapidly across the Western world as scientific research gains momentum and global regulatory approvals expand. The use of fucoidan as a new ingredient in dietary supplements, skin care products, and functional foods and beverages is on the rise.
Finally, remember that as the commercial use of algae is gaining momentum around the world and new applications are emerging, it is important that sustainable management practices are maintained. Fucoidan producers currently vary in algae harvesting practices, locations and standards, including harvesting wild stocks versus farmed algae and harvesting in clean ocean waters versus those prone to various forms of contamination.