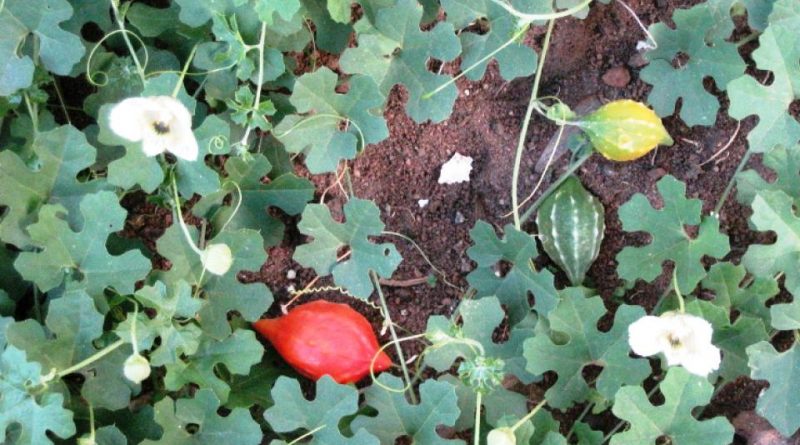 The Balsam Apple (Momordica balsamina Linneo, 1753) is a climbing herbaceous species belonging to the cucurbit family.

Etymology –
The term Momordica comes from momordi, past of the verb bite to bite: for seeds with eroded margin as if they had been bitten.
The specific epithet balsamine comes from the Greek βάλσαμον bálsamon balsam (derived from the Hebrew basam perfume, spice, connected to the Aramaic busma and the Arabic basham): which produces balsamic substances, with a strong aromatic smell.

Geographic Distribution and Habitat –
The Balsam Apple is an endemic plant of sub-Saharan Africa but is also cultivated in India and Pakistan and has recently been introduced also in Australia and in the neotropical eco-zone.
Its natural habitat is that of sunny and semi-shady areas of prairies, savannas, woods, forest edges, coastal dune forests and in the vegetation of the banks of rivers, as well as in disturbed areas, where it grows at altitudes from sea level up to 1,465 meters. . 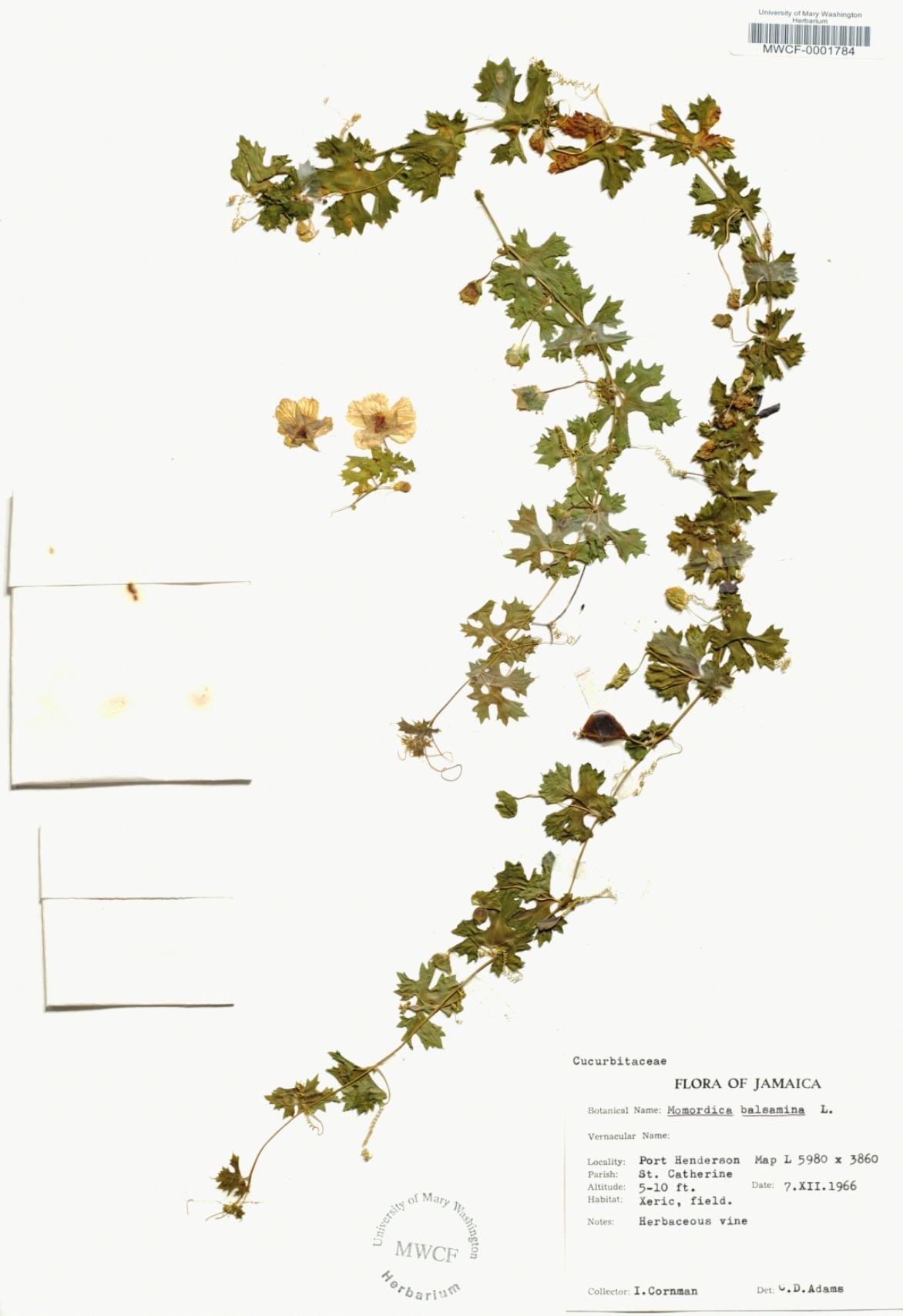 Description –
Momordica balsamina is a climbing herbaceous plant, from annual to perennial.
It has a stem, up to 5 meters long, thin, angular and slightly hairy.
The leaves are alternate and have a hairy and short petiole and the margin is toothed. The leaf blade, soft and thin, is even 12 cm long, is webbed and divided into five or seven lobes arranged in a radial pattern. The tendrils are long, thin and not very intricate.
It is a monoecious, mixed sex plant with sometimes long-stemmed flowers that appear individually, side by side on a bract. The chalice is finely hairy and consists of five lobes. The corolla is white or yellow.
The female flowers have a short peduncle, the ovary is below and unicameral and slightly below the calyx (epiperiginia). Stem cells may be present.
The male flowers have a longer peduncle and have more stamens united, fused together, with plumed and gnarled anthers. In the lower part of the stamens, small protuberances can form that protrude inwards.
The fruits are “armored” berries, red or orange when ripe; they have a pointed and irregular shape, with a length between 4.5 and 7 centimeters and an ellipsoidal development. When the fruit ripens, the fruits split into three lobes and release the numerous seeds. The seeds are elliptical, resistant and brownish in color; they are up to 1 cm in size and each is wrapped in a coating called “pulp” (it is a false aril).
The whole plant smells bad and contains pungent sap.

Cultivation –
Balsam Apple is a perennial climbing plant that is grown on a small scale in almost all tropical areas as a vegetable and medicinal plant.
Ripe fruit, although said to be edible, has been reported to cause vomiting and diarrhea and can be poisonous.
This plant can be grown in subtropical and warm temperate areas up to 1,465 meters, in dry to humid areas with rainfall of 200 – 1,200 mm per year. The plant appears to be fairly resistant to frost.
It is found in the wild in sandy soils but also in clayey, clayey, alluvial, gravelly and calcareous soils.
However, it requires a soil rich in organic matter if optimal yields are to be obtained.
Propagation occurs by seed with sowing directly in situ.

Customs and Traditions –
Momordica balsamina is a plant whose fruits and leaves can be consumed after cooking; in particular, the red “pulp” of the fruit is eaten.
The fruits, seeds and leaves are used in homeopathic medicine. The fruits and leaves are locally used to make a soap substitute. The plant sap can be used medicinally or as a metal cleaner.
The fruits have a bitter taste and harvested when ripe and also unripe, they are cooked and used as a vegetable.
The fruit can be pickled or, after prolonged soaking, it can be cooked and used in soups, etc.
For medicinal purposes there are several uses of this plant. The most common and widespread uses are the following:
– the fruits, seeds and leaves are anthelmintic;
– the leaves are used as a cure for fever and excessive uterine bleeding, and to treat syphilis, rheumatism, hepatitis and skin diseases;
– the whole plant is emetic, purgative and vermifuge even if the parts are not specified.
The fruits are used in Syria for wound healing.
Leaf sap is said to be an effective metal cleaner while leaves are used to clean metal objects and to wash hands and body; form a slightly soapy solution in water.

Preparation Method –
Both the fruits and the leaves as well as the sap are used from Momordica balsamina.
The fruits should be harvested when they are green.
Also, although immature, green fruits are often eaten, fully ripe fruits have been reported to cause vomiting and diarrhea and can be poisonous.