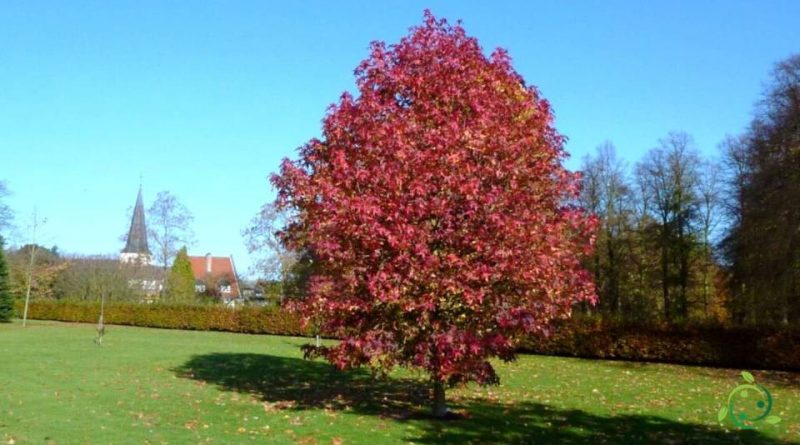 How American sweetgum is grown

The Liquidambar or American sweetgum (Liquidambar styraciflua L., 1753) is an arboreal plant of the Altingiacee family, native to eastern North America, from southern Canada to Florida and Mexico. It is a tree that grows in fresh and mixed forests that has also been imported to Europe as an ornamental plant.
Liquidambar styraciflua is a monoecious plant with male, yellowish flowers, arranged in racemes at the ends of the branches and isolated female flowers supported by a long peduncle inserted at the base of the raceme. The fruit is a woody capsule united in a globular infructescence. Each capsule contains 1 or 2 seeds. The infructescence, at first green, becomes woody and is thorny due to the persistence of the styles.

Cultivation –
Let’s see how American sweetgum is grown.
Its cultivation can start from both cutting and seed. The cuttings are obtained in spring or autumn and placed in a mixture of sand and peat to root them. The seeds, on the other hand, are taken in autumn and kept for a few weeks in a cool, humid environment before planting them.
Obviously, you can also start with young seedlings purchased in the nursery and in this case you will need to prepare a hole in which to put, in advance, some well-ripened organic fertilizer.
The annual fertilization should be carried out instead, at the collar of the foot of the plants, at the end of winter, with organic fertilizers already ripe and then mixed with the same earth next to the plant.
Regarding the type of soil, Liquidambar styraciflua is a plant that adapts to numerous types of soil as long as these are humid, drained and fertile.
As for the pruning, this must be done in spring to eliminate the branches damaged or broken by the winter weather, while in the summer those low branches that make the tree somewhat messy must be removed. Finally, from autumn to winter it is good to prune too long fronds that have formed an exaggerated crown.
Finally, the exhibition.
The American sweetgum is a plant that needs sunny or at most a little shady places. The plant tolerates the cold well and its roots spread out to go deep, so it needs space to develop well.

Uses –
The American sweetgum is a plant that in Europe and Italy is used as an ornamental species in parks and gardens. Generally it is planted on the sides of the avenues, or isolated within gardens.
From the incision of the bark, a resin with an incense aroma (liquid amber) is collected which is used in the cosmetics industry as a perfume fixer.
This fragrant resin, called storax, has the appearance of black peat. This resin, soft to the touch, can be placed on glowing charcoals. The smoke that forms is white and fragrant and once dissolved the fragrance continues to be perceived for hours.