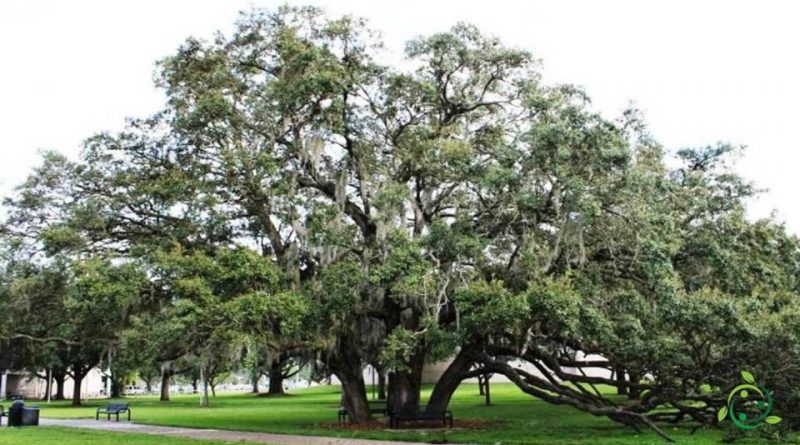 How the Southern live oak is grown

The Southern live oak (Quercus virginiana Mill., 1768) is an evergreen oak of the Fagaceae family native to North America and widespread in the south-eastern United States, where it is found in mixed woods. It is a symbol of the deep South of the United States, where many centuries-old specimens are found.
Its reproductive structures are acorns similar to those of the holm oak but smaller.
It is a monoecious plant with male green catkins 7.5-10 cm long flowers. The flowering period is from late winter to early spring.
The acorns, as mentioned, are relatively small (1-2.5 cm) with an elongated shape (ovoid or oblong-ellipsoidal), shiny and with a color ranging from brown to almost black, with a black apex, individually supported or in clusters of three acorns on a 10 to 20 mm long stem.
The acorns are contained in spherical domes 8-15 mm in size, covering a third of the whitish to greyish acorn.

Cultivation –
The Southern live oak is a species that grows in the vicinity of wetlands but on soils that immediately drain temporary submersion of the soil and, in any case of short duration, therefore it needs substrates that drain very well.
It is a plant that grows well in a rainfall range between 1000 and 1600 mm of annual rainfall, preferably in spring and summer. The soil must usually be acidic, with a pH between 5.5 and 6.5.
In the southern United States and Mexico and in the warmer parts of Europe and Australia, the southern oak is grown as a shade tree. Cultivation is relatively simple, as Southern oak seedlings grow rapidly with abundant soil moisture. After a few years only occasionally emergency irrigation. Southern oak lives very long, and there are many specimens that, in the deep south of the United States, are over 400 years old.

Uses –
The Southern live oak is one of the most beautiful evergreen oaks, often grown in parks and historic gardens.
Quercus virginiana wood is hard, heavy and difficult to work, but very resistant. Due to this peculiarity, in the past its trunks were used for the beams of the wooden ship structure. The dense density of the wood allowed the ship to resist several gunfire, so much so that it received the nickname of “Old Ironsides”.
Its main uses today are to provide shelter and food for wildlife. Acorns are in fact included in the diet of various animals such as the Virginia colander, the Florida jay, the bride duck, the yellow-bellied woodpecker, the wild turkey, the black bear, the white-tailed deer and several species of squirrels.
The foliage is very large and dense, thus providing shade and the possibility of nodification on its branches. Native Americans used to extract an oil from acorns used in cooking; moreover they used different parts of Quercus virginiana for medicinal purposes, in addition to the leaves (to make carpets) and the bark (for dyes).
The roots of the seedlings occasionally produce tubers that in the past were fried and eaten as a substitute for potatoes.