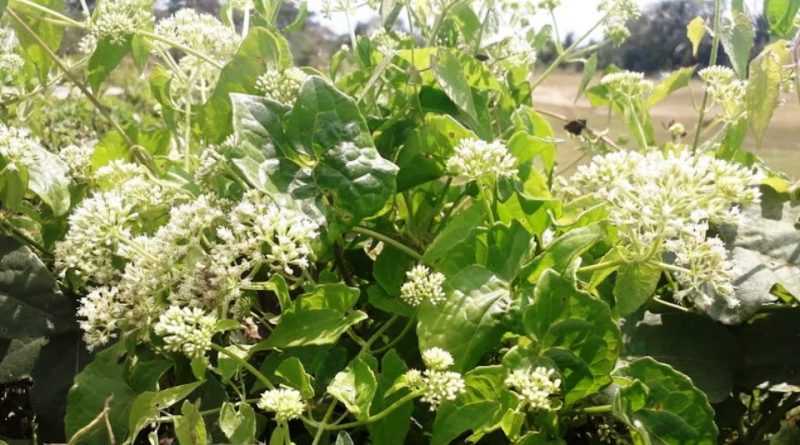 The Guaco (Mikania glomerata Spreng.) Is a shrub species in the form of a vine belonging to the Asteraceae family.

Etymology –
The term Mikania of the genus was dedicated in honor of the Bohemian botanist Johann Christian Mikan (1769-1844).
The specific epithet glomerate comes from glŏmĕro to wrap, curl, thicken, group: with parts joined in bunches at the apex (eg. Flowers grouped in an inflorescence).

Geographic Distribution and Habitat –
Guaco is a plant native to the areas of the Amazon probably close to the easternmost stretch of the Amazon River and present in the Amazon, eastern and south-eastern Brazil and Argentina.
Its habitat is that of the temperate-humid and tropical areas of the Amazon basin at altitudes between 0 and 900 m. s.l.m .. 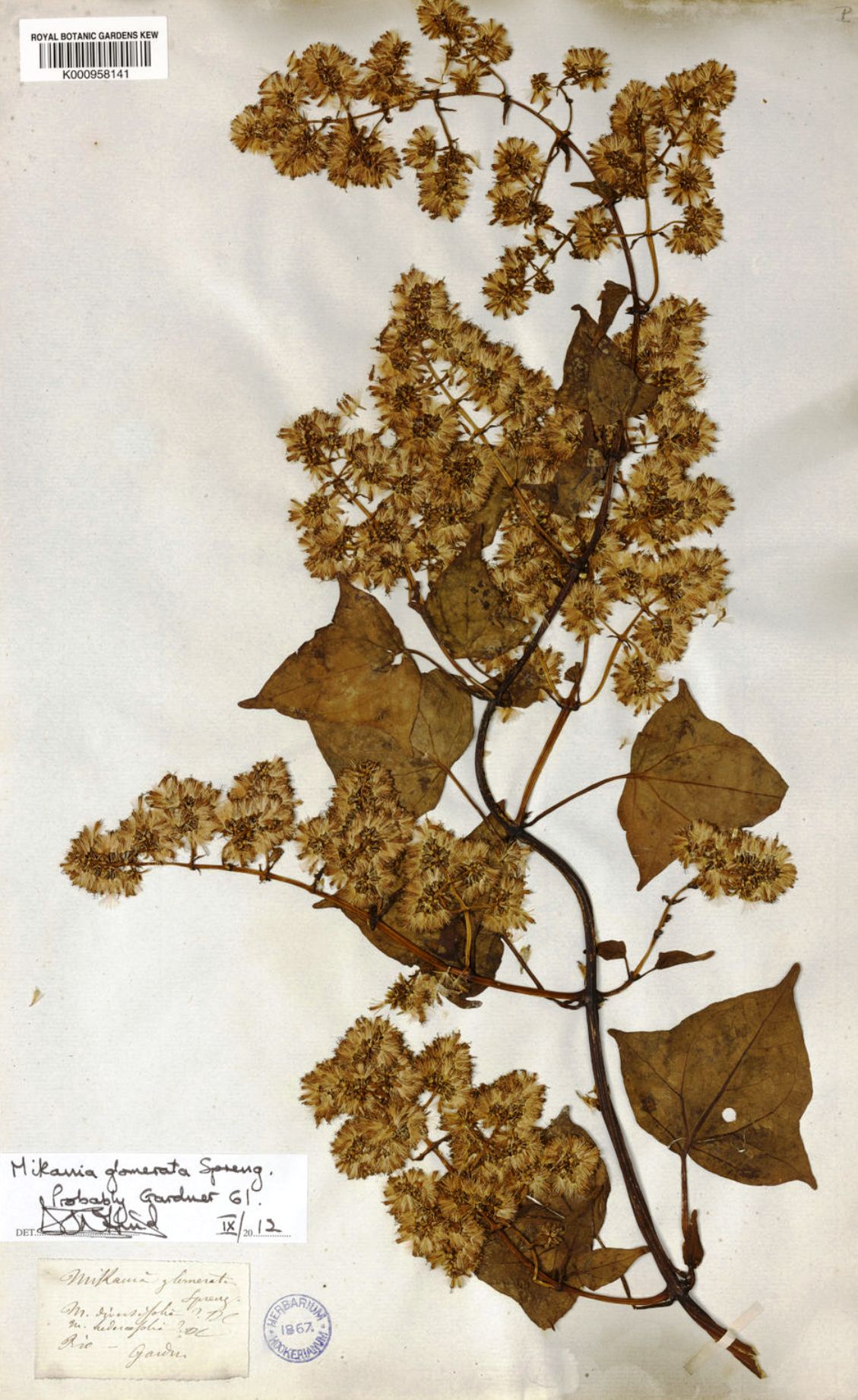 Description –
Mikania glomerata is a vine-like wood species with height that can grow by climbing other plants.
It has opposite and spirally arranged leaves with a long petiole and the lamina has an ovate outline with a tightly corded base and a triangular base; the consistency is leathery; the margins are wavy.
The inflorescences are composed of terminal flower heads both on the main and lateral cauli. The flower heads are formed by a cylindrical sub-envelope composed of 4 sub-equal and persistent scales (or bracts) in whose interior a receptacle forms the basis for the all tubular flowers. The scales are arranged in two series (the two copies are arranged in an overlapping manner). The receptacle is flat and has no steel wool. Casing diameter: 1 to 4 mm.
The flowers are tetra-cyclic (with four verticils: calyx – corolla – androecium – gynoecium) and pentamers (each whorl is composed of five elements). They are also actinomorphs and hermaphrodites. There are 4 flowers per head.
The fruits are achenes with pappus. The shape of the achenium is prismatic. The carpophore has a short-cylindrical shape. The pappus is composed of numerous (from 30 to 60) bearded, persistent, capillary-shaped bristles with obtuse or acute apical cells and arranged on 1 – 2 series.
The whole plant gives off an unpleasant smell.

Cultivation –
Mikania glomerata is a plant that grows mostly in the spontaneous state and that prefers subtropical areas with humid climate and organic soils.
It is collected for various uses, especially medicinal and used in herbal preparations.
The plant can be propagated by seed or by layering.

Customs and Traditions –
Native Americans and Colombians believe that the guaco got its name from a species of kite, in imitation of its cry, which it is said to use to attract the snakes it feeds on. Tradition says that the plant’s powers as an antidote were discovered by watching the bird eat the leaves and even sprinkle the juice on the wings, before attacking the snakes.
However, with the name of guaco different species of the genus Mikania are identified, which do not always coincide with this plant.
It is claimed that the natives of Central America, after taking the guaco, catch the most dangerous snakes with impunity, which writhe in their hands as if touched by a red-hot iron. It is said that the smell of guaco alone causes a state of amazement in snakes; it was Humboldt who observed that the proximity of a rod soaked in guaco juice was repulsive for the poisonous Coluber corallinus; the opinion was that inoculation with it gives sweat a smell that makes reptiles reluctant to bite. However, the drug is not used in modern medicine.
In Brazil, guaco is commonly used as a medicinal tea as an expectorant and anti-inflammatory due to the presence of coumarin.

Preparation Method –
The whole plant is used from Mikania parviflora, including the root.
A decoction is used for a febrifugal bath.
It should be remembered, however, that the term guaco, huaco, vejuco and bejuco refers to various vine-like climbing plants from Central America, South America and Western India, which are believed to have healing powers. Several species of the genus Mikania are among those referred to as guaco.