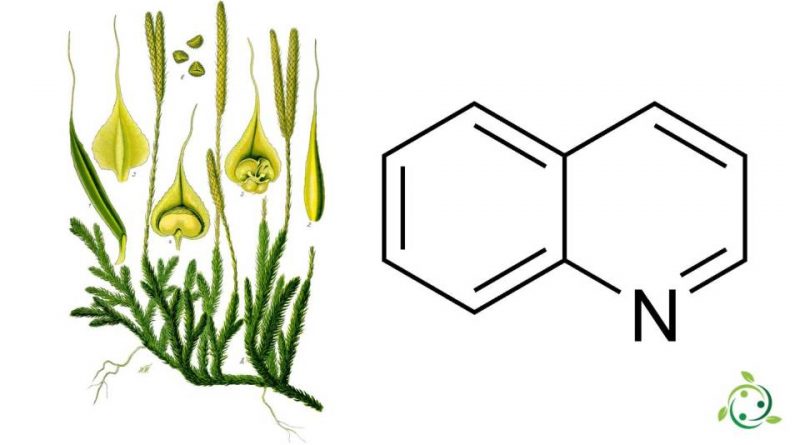 Quinoline whose term in the official IUPAC nomenclature is: 1-azanaphthalene, is an aromatic heterocyclic chemical compound with a brute or molecular formula: C9H7N.
Quinoline, like isoquinoline, is an isoelectronic molecule of naphthalene. It is also known as 1-benzazene, benzo [b] pyridine.
Quinoline is a substance of natural origin present in some plants such as the Club moss (Lycopodium clavatum L., 1753).
Quinoline is also present in the Peruvian stick insect (Oreophoetes peruana Saussure, 1868).
At room temperature it appears as a pale yellow high boiling liquid.
Quinoline is also a hygroscopic liquid with a strong odor. Aged specimens, especially when exposed to light, turn yellow and subsequently brown. Quinoline is only slightly soluble in cold water, but it dissolves easily in hot water and most organic solvents.
Quinoline has few applications, but many of its derivatives are useful in different applications. An important example is quinine, an alkaloid found in plants. Over 200 biologically active quinoline and quinazoline alkaloids have been identified.
4-hydroxy-2-alkylquinolines (HAQ) are involved in antibiotic resistance.
Historically quinoline was first extracted from coal tar in 1834 by the German chemist Friedlieb Ferdinand Runge; he called quinoline leukol (“white oil” in Greek).
Currently, coal tar remains the main source of commercial quinoline.

Like other nitrogenous heterocyclic compounds, such as pyridine derivatives, quinoline is often reported as an environmental contaminant associated with plants that process oil shale or coal and has also been found at legacy wood processing sites. Due to its relatively high solubility in water, quinoline has a significant potential for mobility in the environment, which can promote water contamination. Quinoline is readily degradable by some microorganisms, such as the Q1 strain of the Rhodococcus species, which has been isolated from soil and paper mill sludge.
Quinolines are also present in small quantities in crude oil within the virgin diesel fraction. It can be removed by the process called hydrodenitrification.
Quinoline is used in the production of dyes, in the preparation of hydroxyquinoline sulfate and niacin. It is also used as a solvent for resins and terpenes.
Quinoline is mainly used as in the production of other specialty chemicals. Its primary use is as a precursor to 8-hydroxyquinoline, which is a versatile chelating agent and pesticide precursor. Its 2- and 4-methyl derivatives are precursors of cyaninated dyes. The oxidation of quinoline provides quinolinic acid (pyridine-2,3-dicarboxylic acid), a precursor to the herbicide sold under the name “Assert”.
Quinoline has several antimalarial derivatives, including quinine, chloroquine, amodiaquine and primachine.
Quinoline is also used as a solvent in the decarboxylation reactions of organic compounds.