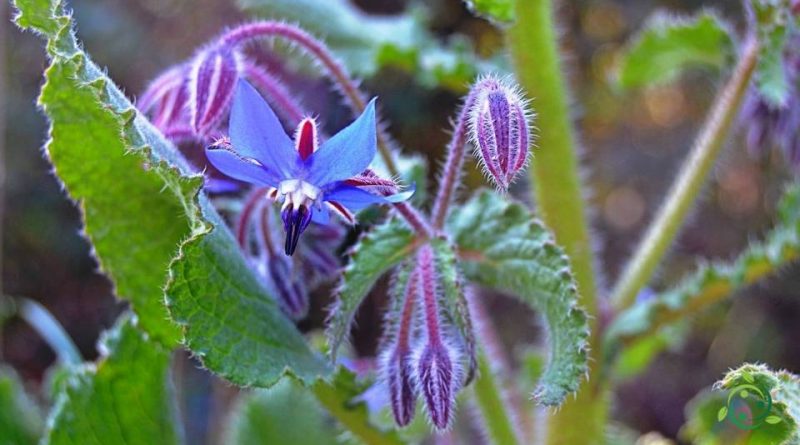 Borage (Borago officinalis L.) is an annual herbaceous plant of the Boraginaceae family that grows spontaneously and can be easily cultivated.

Features –
Borage is an annual herbaceous plant, which can reach a height of 60 cm.
This plant has oval, elliptical leaves, petiolate, with a rough down, dark green, collected in a basal rosette, 10-15 cm long and then smaller on the stem.
The short-lived flowers have five petals, arranged in a star, blue-violet color, in the center the anthers deriving from the union of the 5 stamens are visible. They are collected in top, pendulous inflorescences in full bloom; they have long pedicels.
The fruits are achenes which contain various small seeds inside; the seeds are endowed with elaiosomes, particular appendages containing nutritious substances palatable to the ants, which facilitate their dissemination (myrmecoria).

Property –
Borage is a well-known plant for those who live in the countryside but much less for those who live especially in large centers.
This plant boasts various properties and benefits: it is antioxidant and anti-inflammatory, useful for fighting diseases related to the inflammatory state, such as rheumatoid arthritis; relieves asthma symptoms by reducing inflammation and swelling of the airways; promotes wound healing and counteracts eczematous dermatitis.
This plant also has beneficial properties for the skin thanks to the high content of antioxidants and thanks to its anti-inflammatory action. Cold extracted borage oil regulates the production of sebum and normalizes the skin, both in the case of dryness and, on the contrary, in the case of oily skin. It is also a valid help in case of dermatitis, for example in association with burdock.
Furthermore, the presence of mucilage in borage (such as Mallow) makes it a valid remedy in case of constipation and intestinal inflammation problems.
In folk medicine, leaves and flowering tops are used.
Since ancient times, the plant has been known to awaken vital spirits (Pliny: “A decoction of borage removes sadness and gives joy to live”).
It is used to lower fever and calm dry coughs. It is also known as a diuretic and emollient (due to the presence of mucilage).
The oil, with strong anti-inflammatory properties and a high content of linolenic acid, is obtained from the seeds mainly by cold pressing. It is used in the treatment of eczema and other skin conditions.
In fact, in recent times, commercial interest has emerged, at an international level, for the oil extracted from the seeds, rich in gamma linolenic acid (GLA; 18: 3 ω6), which has several uses: nutritional, dietary, medicinal and cosmetics. The plant is of easy industrial cultivation, which increases its value, since the only other vegetable source for this oil are the seeds of Oenothera biennis, of more complex cultivation and with lower yields.
Furthermore, the flowers, with a high quantity of nectar, are highly sought after by bees, therefore it is a melliferous plant; it is possible to obtain an excellent honey, even monofloral, but borage is not very common and production is limited.