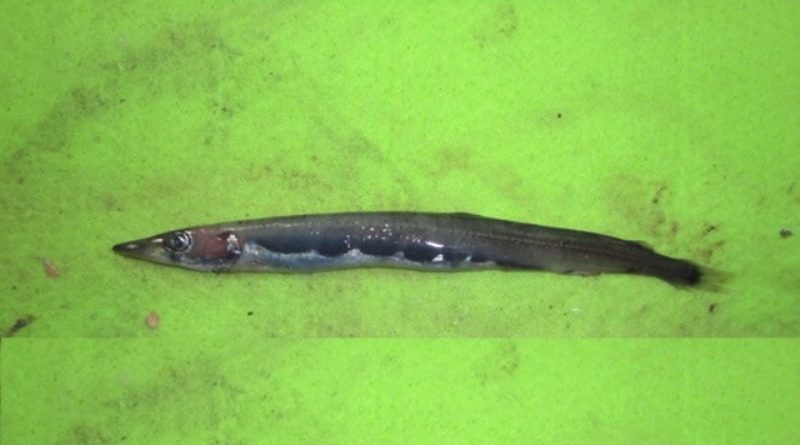 Geographic Distribution and Habitat –
The Paralepis speciosa is a little known and uncommon species probably originating from the Mediterranean Sea where it is also present in the southern Adriatic Sea and more present in the seas around Naples, Messina, Lipari islands.
Its habitat is that of deep waters up to 1000 meters; it has pelagic habits but stays rather close to the seabed.

Description –
Paralepis speciosa is a fish with an elongated and laterally compressed shape, with a length of up to 12 cm.
It has the pointed snout and the ventral fins and the pairs rather set back; the small ventral fins are implanted on the vertical of the dorsal fin. There is a small adipose fin; the anal fin is long. The caudal fin is forked and the two lobes are pointed.
The mouth is wide and armed with sharp and strong teeth, some of which are implanted on the premaxillary bone. The eyes are large and round.
The body is covered with very small, silvery scales, which fall off easily at the slightest contact.
It has a bright carnicine silvery color with iridescent reflections in the lower part, with black pigment on the head, on the back, as well as at the base of the tail fin, only 7/8 black spots stand out in the abdominal tract.
The fins are instead bluish and transparent.
Generally this species is similar to Paralepis coregonoídes, but some teeth are longer and stronger (near the apex of the premaxillary or on the mandibular one).
The number of vertebrae is usually from 66 to 69, while in P. coregonoides it is higher than 70.

Biology –
Paralepis speciosa which lives in shoals where individuals stand with their heads turned upwards and whose biology is little known.

Ecological Role –
Paralepis speciosa feeds on planktonic organisms, especially eufausiaceous crustaceans and is a bathing-pelagic species, which performs considerable vertical migrations.
This fish is only occasionally caught with plankton nets. Very rarely it can end up in purse seines or trawl nets. The meats taste good but are not found on the market.