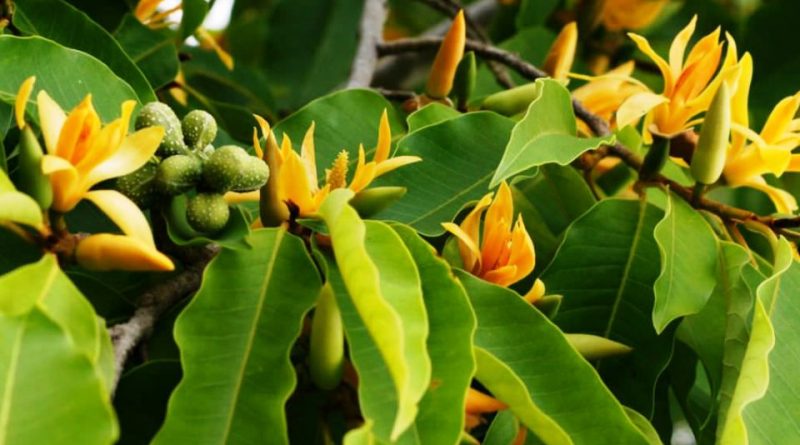 Etymology –
The term Magnolia of the genus was dedicated by Linnaeus to Pierre Magnol (1638-1715) French physician and botanist in Montpellier.
The specific epithet champaca comes from the Sanskrit word campaka.

Geographic Distribution and Habitat –
Champaca is a large tree native to the Indo-Malay region, in an area that includes: Maldives, Bangladesh, Cambodia, China, India, Indonesia, Malaysia, Myanmar, Nepal, Thailand and Vietnam. In China, it is native to southern Xizang and the southern and southwestern provinces of Yunnan.
Its habitat is that of the ecoregions of the broad-leaved rainforests of tropical and subtropical areas, at altitudes of 200-1,600 meters. 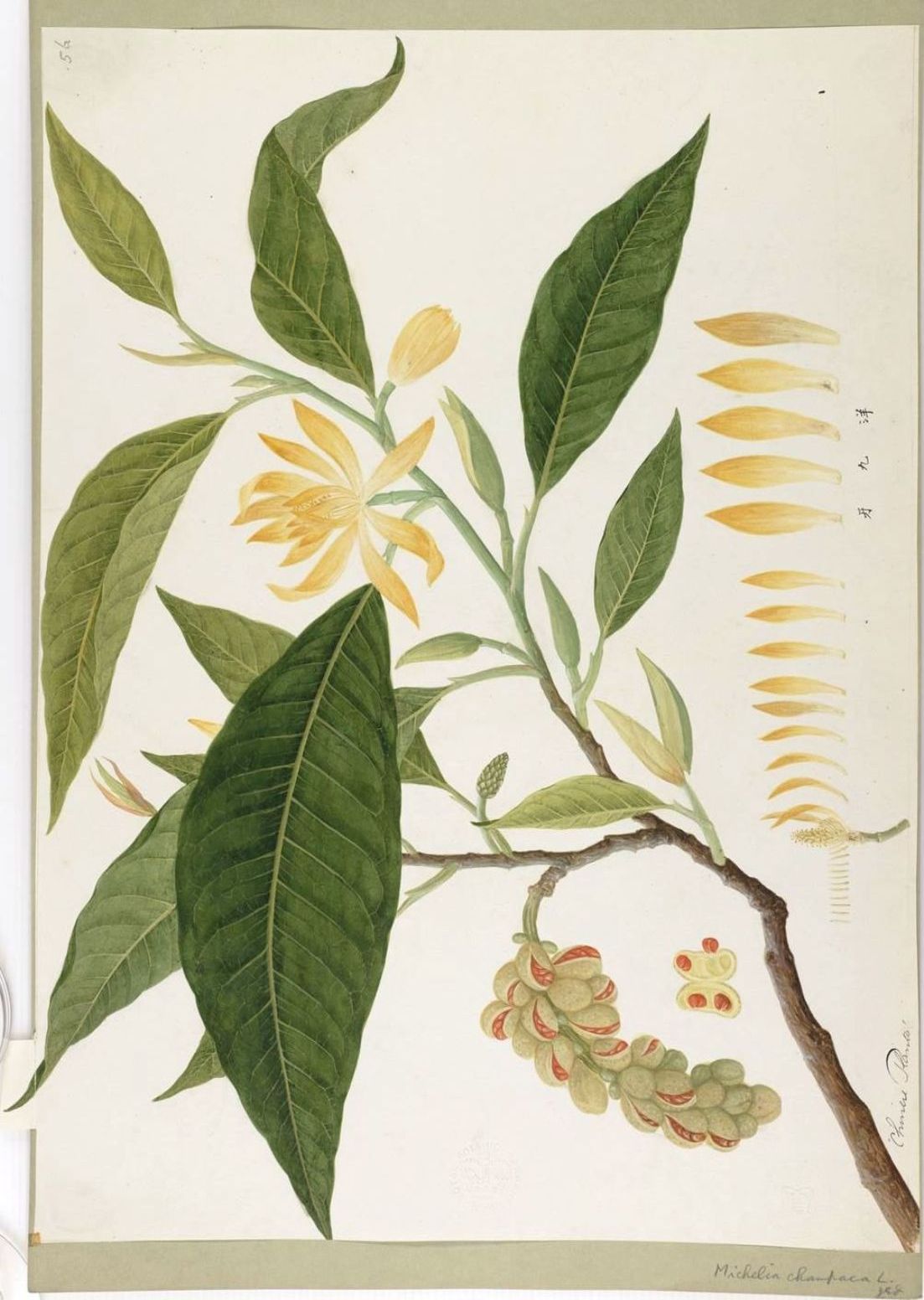 Description –
Magnolia champaca is a plant that grows up to 50 meters or more in its areas of origin.
Its trunk is long and straight and can be up to 1.9 meters in diameter and the tree has a narrow umbrella-like crown with ascending branches.
The leaves are large and leathery with an ovoid lanceolate shape with evident veins.
The flowers are strongly scented in various shades from cream to yellow-orange that bloom from June to September. Carpels are obovoid-ellipsoid producing 2-4 seeds from September to October.

Cultivation –
Magnolia champaca is a plant that is used both spontaneously and subject to cultivation for various uses.
It is also reproduced by specialized nurseries as an ornamental plant, due to its shape of an ornamental tree, to create dense hedges and for its fragrant flowers.
It is a typical plant of the humid and subtropical tropics, capable of being cultivated even in the warm temperate zone.
It grows best in areas where annual daytime temperatures are between 30 and 37 ° C, but can tolerate 10 – 47 ° C.
It prefers an average annual rainfall in the range 3,000 – 4,000 mm, but tolerates 2,200 – 5,100 mm.
For cultivation it requires a sunny position in a moist but well-drained, deep, fertile, clayey to sandy soil and with a pH between 4.5 – 5.5, tolerating 4 – 6.
Seed-propagated trees take 8 – 10 years to flower, while vegetatively propagated trees flower in 2 – 3 years.
In the Java region, the average annual growth of 10 – 27 year old trees is 1 – 1.8 meters high and 1.5 – 2 cm in diameter; in addition, a rotation of 50 years is recommended to produce sawn timber.
The tree responds well to coppice and is susceptible to fire.
The flowers and fruits of the tree throughout the year and on the roots have been observed nitrogen-fixing mycorrhizae.

Customs and Traditions –
Champaca is a plant with a wide range of uses that was previously classified as Michelia champaca L.
In native India and Southeast Asia, Champaca is cut for its valuable timber. It has a finely textured, dark brown and olive colored wood, which is used in furniture, construction and furniture making.
In Theravada Buddhism, Champaca is said to have been used as a tree to attain enlightenment, or Bodhi, by the seventeenth Buddha called “Aththadassi – අත්ථදස්සි”. According to Tibetan beliefs, the Buddha of the next era will find enlightenment under the canopy of white flowers of the Champaca tree.
The flowers are used in Southeast Asia for several purposes. Especially in India, they are used primarily for temple worship, both indoors and out, and most generally worn in the hair of girls and women as a means of beauty adornment and natural perfume. The flowers are floated in bowls of water to perfume the room, as a scented decoration for wedding beds and for wreaths.
The tree was traditionally used to make scented hair and massage oils. The famous perfume by Jean Patou, “Joy”, the second best-selling perfume in the world after Chanel n. 5, derives in part from the essential oils of champaca flowers.
It is currently also used in its natural state as a source of food, medicines and other products. It is particularly prized for its essential oil and timber, and is sometimes grown for these uses.
The tree is also used in reforestation projects and is commonly grown as an ornamental and vegetable plant throughout the tropics, being especially appreciated for its fragrant flowers, which are often used in religious ceremonies.
The aromatic, bitter bark is sometimes used for cinnamon adulteration, and the fruit is said to be edible.
The bark is used as a febrifuge.
In the places of origin after childbirth a decoction of bark and leaves is administered while the flowers are used to treat leprosy.
The leaves are used as a treatment for colic.
The seeds are used to treat severely cracked skin.
The fatty oils extracted from the seeds show antibacterial activity against Bacillus pumilus, B. Subtilis, Salmonella typhosa, S. Paratyphi, Micrococcus pyogenes var. Albus and Staphylococcus aureus.
The flowers produce an essential oil known as champa or champaca oil which is used in perfumery.
Another essential oil, known as Michelia leaf oil, is extracted from the leaves.
The sweetly scented flowers are used in India for hair adornment.
From the flowers a yellow dye is obtained.
Seed analyzes showed a content of about 20%. However, the oil content of each kernel is quite high, at 32.2%, which gives it potential for commercial exploitation for the production of oil for various uses.
As far as the wood is concerned, this has an olive brown heartwood that turns to dark brown with a greenish tinge on exposure, it is clearly differentiated from light brown, up to 8 cm wide sapwood.
The wood is soft, light and has a uniform grain.
Heartwood is strong, durable and capable of receiving a high polish. It has a straight or lightly woven grain, fine to moderately fine and uniform texture.
Wood works well and is used for furniture, cabinet making, carving, turning and modeling; it was also used for cement-bonded wood wool panels.
In India it was recommended to surround the trees for about 3 years before felling to avoid possible deformation and control of the wood.
The plant is also used as firewood, the gross energy value of the heartwood is about 21,070 kJ / kg.
As for agroforestry uses, the tree is used to reforest severely eroded areas in Java. Soil under the tree cover shows an increase in pH value, soil organic carbon and available phosphorus.
This species is protected from logging in some states of India, especially in the southwestern region, where some woods are considered sacred by Hindus and Buddhists.
Furthermore, from an ecological point of view, the fragrant flowers attract butterflies and hummingbirds. Its seeds covered with arils are very attractive to birds.

Preparation Method –
In traditional Ayurvedic medicine, an infusion of bitter bark is consumed to reduce fever while the leaves are made into tea to relieve cough and tonsillitis. The flowers and buds are believed to have antiseptic properties and are applied externally on wounds or inflammation.
As mentioned the wood is light and strong and can be used as lumber for furniture, door panels, cabinets, sacred objects such as bead chains and even coffins.
The flowers can be dried and are rich in essential oil and used for perfume and hair oil.
The flowers are also used for Hindu and Buddhist religious offerings.