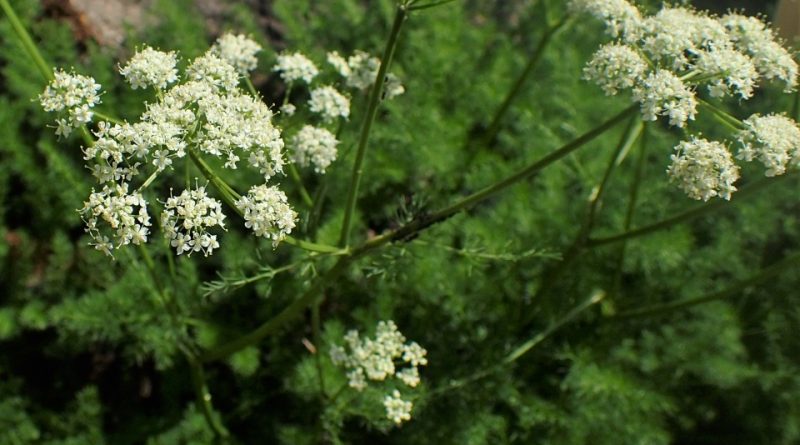 The baldmoney (Meum athamanticum Jacq.) Is a herbaceous species belonging to the Apiaceae family.

Etymology –
The term Meum comes from meum a herbaceous plant mentioned by Pliny.
The specific epithet athamanticum comes from the genus Athamanta (in honor of the Greek mythological character Ἀθάμας Athámas Atamante, son of Aeolus and king of Thebes or, according to Paul Fournier, of the slopes of Mount Athamas in Thessaly): which recalls plants of that genus.

Geographic Distribution and Habitat –
Baldmoney is a rare plant that originates in the mountain districts of Western Europe and Central Europe; its range extends as far south as the Sierra Nevada (Spain) of Andalusia and central Bulgaria in the Balkans. It is also present in Norway and Great Britain, although not common, and is found only in a few locations in the north of England and in the north of Wales, although a little more abundant in Scotland, where it is found as far north as ‘Argyll and Aberdeenshire.
In Italy it is present in most regions (absent in the islands, in Lombardy, in Friuli V.G., in Campania, in Molise and in Puglia).
Its habitat is that of grassy places in mountainous districts, usually on calcareous soils, where it grows between 1000 m and 2800 m a.s.l. 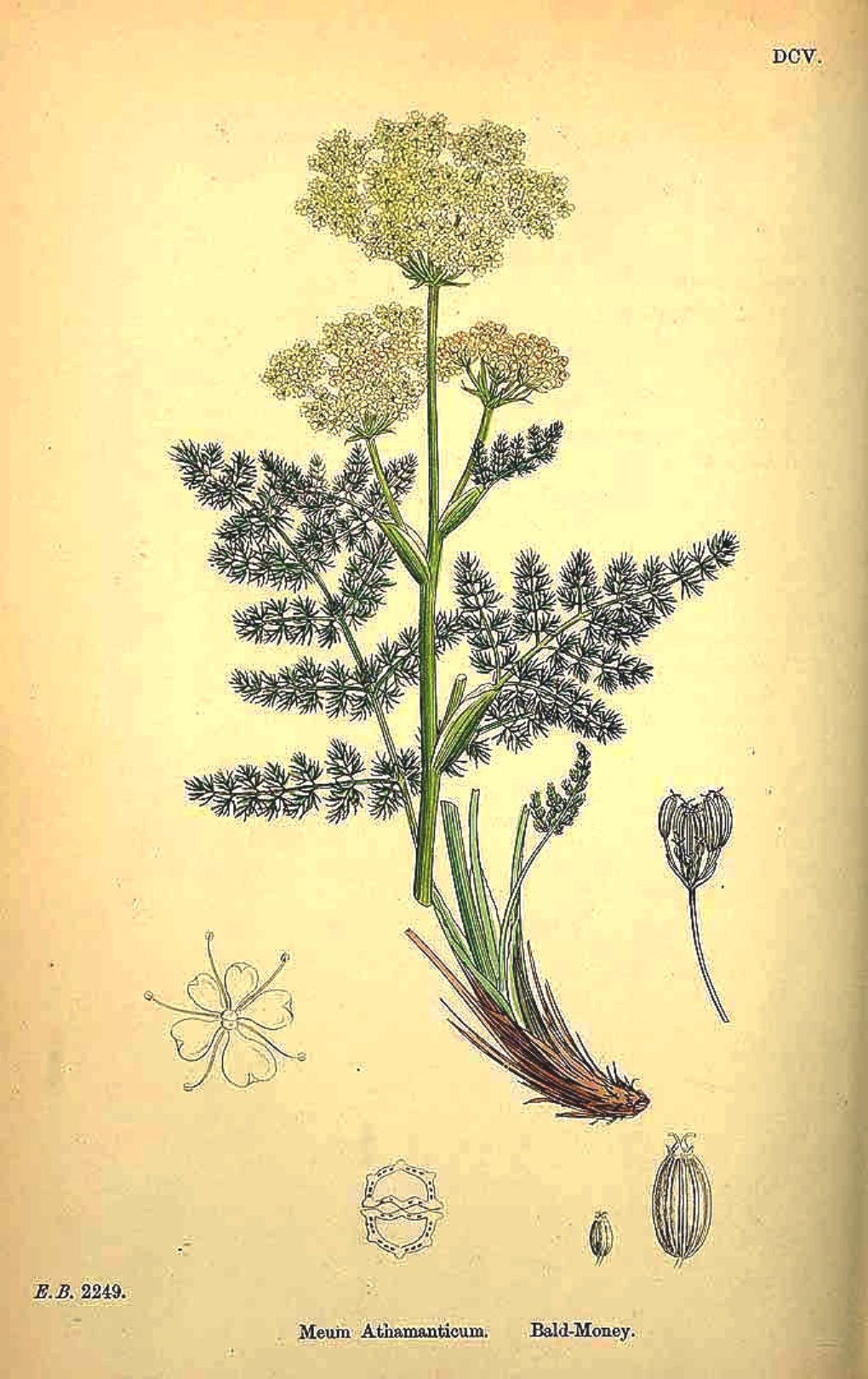 Description –
Meum athamanticum is a perennial herbaceous plant up to 60 cm tall.
The stem is erect, slightly branchy, fistulous, finely striated, with a woody root, wrapped in a felt of brown fibers; if crushed, it gives off an aromatic smell, similar to that of sweet clover.
The leaves are triangular in outline (up to 25 cm long) with filiform segments, about 0.2 mm wide and about 3.5 mm long, forming pseudo verticilli.
The flowers are small and with white (or sometimes purple) petals and are gathered in inflorescences in the form of umbels (with a diameter of about 18 cm) with 10-15 rays, with 3-5 bracts (sometimes even with 1-2 deciduous bracts ).
Its flowering period is between the months of May-August.
Pollination is by insects.
The fruits are 7-10 x 3 mm polachenarians, ellipsoid, slightly compressed dorsally, glabrous, brownish when ripe. Mericarpi with the 5 prominent, large, keeled ribs, the two lateral ones slightly less wide; numerous lives 3-5 in each valley and 4-8 in the commissure. Bipartite carpophore. Seeds with concave endosperm in the commissural face.

Cultivation –
Meum athamanticum is a perennial plant that grows well in almost all well-drained fertile soils and in a sunny position.
The plant can be propagated by seed which must be sown as soon as it is ripe in an unheated seedbed.
The stored seed should be sown as early as possible in the year. The transplant should be done in individual pots when the seedlings are large enough to be handled and transplanted in the summer or the following spring depending on the latitude of cultivation.
Propagation can also take place by division in autumn.
Larger tufts can be planted directly in their permanent positions. The smaller divisions, on the other hand, should be grown in light shade in a cold greenhouse until they are well established before planting them in late spring or early summer.
This plant was once grown for its edible root.

Customs and Traditions –
Baldmoney is an edible and officinal plant.
The plant has medicinal properties and can be used as a diuretic, emmenagogue, stomachic.
Meum athamanticum is a highly aromatic plant. All parts of the plant, especially the roots, are aromatic.
The scent of the roots of this plant resembles that of two other umbellifers: Levisticum officinale and Angelica archangelica, while the aromatic flavor of the leaves is reminiscent of sweet clover (Melilotus officinalis).
This plant was once grown in some countries where the roots were eaten as a root vegetable. The delicate, feathery foliage has been used as a dressing and in the preparation of a wide variety of home remedies as a diuretic, to control menstruation and uterine disorders, and to treat phlegm, hysteria and stomach ailments.
Furthermore, Meum athamanticum is not very popular in pastures for cattle breeders, because ingested by cows it can give a particular flavor to the milk.

Preparation Method –
Baldmoney is a plant used for its edible and medicinal properties.
In addition to its medicinal uses, it is used in the kitchen where the root is used, which is cooked as a condiment for soups and stews. The leaves are also used in various dishes.
In addition, a variety of Bavarian grappa is flavored with its extract.