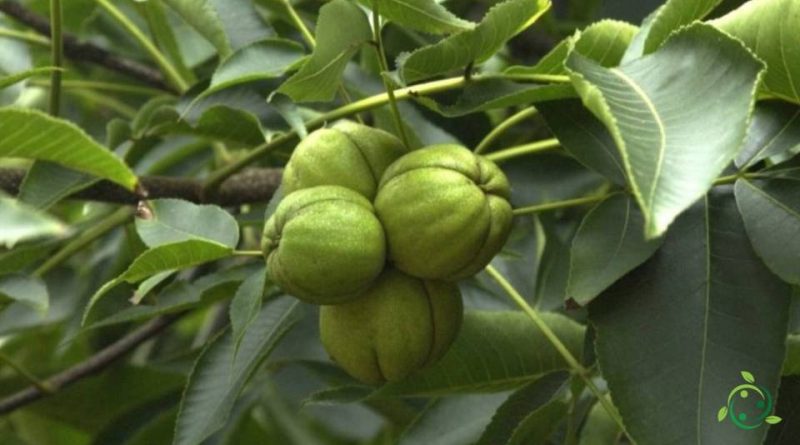 How shagbark hickory is grown

The shagbark hickory (Carya ovata (Mill.) K. Koch) is a tree native to North America, where it forms mixed deciduous forests.
This plant is common in the eastern United States and southeastern Canada. The walnut of this plant is edible and has a very sweet taste.
The tree was introduced in Europe in the early seventeenth century and was mainly used in Germany for forestry experimentation.
Its reproductive structures are male flowers gathered in groups of three in pendulous cylindrical catkins; the female ones are sessile and gathered in groups of 2-3 on the lateral branches. The fruit is a trima, similar to a walnut, but with the husk that opens into 4 valves when ripe, exposing a woody pericarp, furrowed on the surface, which contains an oily, edible kernel.

Cultivation –
Carya ovata is a plant that prefers sunny environments; these are very slow growing trees, of which it is advisable to evaluate the space necessary for an adequate development of the plant, before planting it.
In general, it prefers cool climates, with summers that are not excessively hot and they develop more conspicuously with a mild climate.
As for the pedological aspects, it grows without problems in any soil, but generally prefers soils with pH tending to acid; it is advisable to bury mature organic fertilizer at the foot of the plant every year, in spring and autumn. For young specimens it is advisable to provide water in case of long periods of drought.
As far as multiplication is concerned, most of the plants used for the cultivation and subsequent harvesting of fruits are obtained from grafted varieties; if you still want to multiply a Carya ovata plant, without worrying about the future harvest, you can do it using the seeds, or by taking semi-woody cuttings, at the end of summer.

Uses –
The shagbark hickory wood is very resistant and flexible and is used for the manufacture of golf and baseball clubs. Walnuts have a delicately aromatic taste. In Europe it is used for ornamental purposes in parks.
Nuts, even if they are edible and with an excellent flavor and used as a popular food, are not suitable for commercial production due to the long time it takes for a tree to produce considerable harvests; they also have unpredictable production from year to year. Walnuts can be used as a substitute for pecans in colder climates and have almost the same culinary function.
The bark of Carya ovata is also used to flavor a maple syrup.