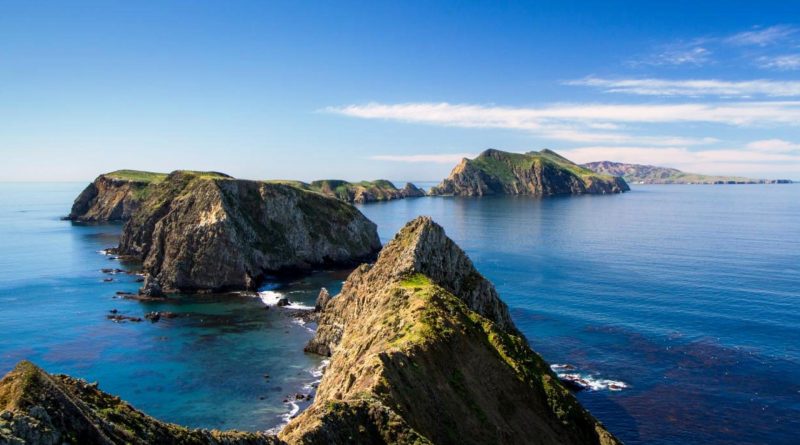 Geography –
The four northern islands of the Channel Islands National Park are Anacapa, made up of three islets of which parts are shown below, Santa Cruz, Santa Rosa, and San Miguel. These islands are located nearly 18km off the California coast near Ventura, where the visitor center is located, and Oxnard. Further south is the small island of Santa Barbara. Three other Channel Islands, Santa Catalina, San Clemente and San Nicholas, all to the south, are not part of the Channel Islands National Park.
The largest island, Santa Cruz, covers 155 Km2. Santa Rosa is the closest and largest with an area of ​​135 Km2, which extends for about 24 Km in length and 16 in width. San Miguel, the westernmost island, is 22.5 Km2, with almost 13 Km in length and 6.4 in width, located about 42 Km from the mainland. The three parts of the island of Anacapa together are approximately 1.8 Km2 in total. The island of Santa Barbara, to the south, is only about 1.6 km2.

Geology –
The Channel Islands were originally formed by volcanic activity about 14 million years ago and have shifted to their current location and shape due to plate tectonics and sea level rise and fall. Although it was once believed that the four Northern Islands – Eastern, Central and Western Anacapa, Santa Cruz, Santa Rosa and San Miguel – could be connected to the mainland, it is now believed that this is not true.
However, 180,000 years ago, when the sea level was about 45 meters lower than in more recent times, these islands were apparently part of a large island land mass known as Santarosae that covered about 1165 km2. This large island was separated from the mainland by only a few miles. The islands reached their present size and shape about 2,000 years ago. 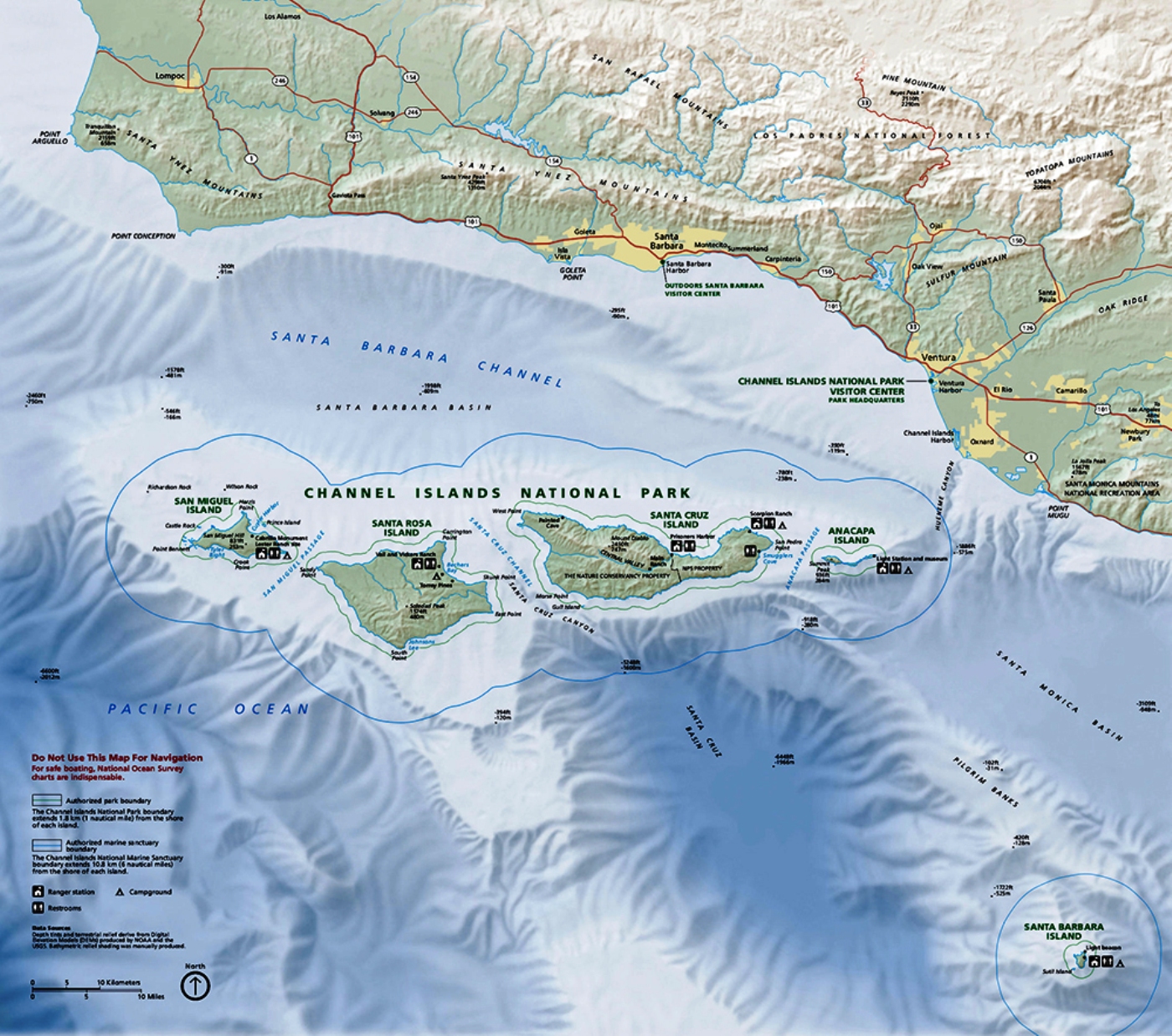 Flora –
Channel Islands National Park supports a diverse terrestrial flora, including many rare, relict and endemic species, as well as many non-native species. Numerous plants are rare on the islands but have a wider distribution on the mainland. On the other hand, due to the environmental conditions and isolation from the mainland, many of the native plants of the Californian mainland do not grow here. A total of about 790 plant taxa have been identified in the park, including species, subspecies, varieties and forms, of which about 578 are indigenous and 205 are non-indigenous.
Each island supports a unique set of vegetative communities, which differ in climate, microhabitat, topography, geology, soils, plant colonization history, isolation, and land use history. Many of the islands’ native vegetative communities have been significantly altered by humans and the introduction of non-native species and are in various stages of recovery. The main types of vegetative communities on the islands include coastal dunes, coastal cliffs, coastal sage scrub, grasslands, chaparral, island oak groves, mixed deciduous woodlands, pine forests, and riparian vegetation. Currently, the islands’ largest plant communities are the grasslands and coastal sage scrub with significant areas of chaparral on Santa Cruz Island and, to a lesser extent, Santa Rosa Island. Various phases of the coastal cliff maquis constitute the next category in size. Mixed deciduous woods, oak woods and pine woods are scattered everywhere on sheltered slopes and canyons or on ridges exposed to frequent wet mists. Smaller but no less significant plant communities include coastal dune, baccharis scrub, caliche scrub, and wetlands.

Fauna –
A variety of organisms live in the Channel Islands National Park, from major predators such as bald eagles and sharks, to intertidal residents such as starfish and barnacles, to the smallest parasites that live on other animals and plants.
Due to their isolation and remote nature, the Channel Islands are home to fewer native animal species than similar habitats on the mainland. Species that reached the islands were aerial, such as birds and bats, or carried across the water on debris and other material. Over time some vertebrate species evolved into distinct subspecies on the islands. For example, the deer mouse and the island fox are recognized as distinct subspecies on each of the islands they live on. A total of 23 endemic land animals have been identified in the park, including 11 land birds, which are subspecies or races.
Life in the waters around the islands is very rich. The currents that flow around the islands are unusual and bring life forms that generally exist up to 1600 km north and south of this area. Indeed, the richness and variety of life forms in this area rival others such as the Galapagos, the Great Barrier Reef and the Caribbean.
Wildlife, including a wide variety of birds such as the seagull, is also found in abundance on the islands.
Unfortunately, from the late 1700s to the mid 1800s, the hunt for marine islands in the channel was intense. Some temporary camps used by seal hunters were established.
By the late 1800s, sea otters and some types of pinnipeds had been hunted almost to extinction.