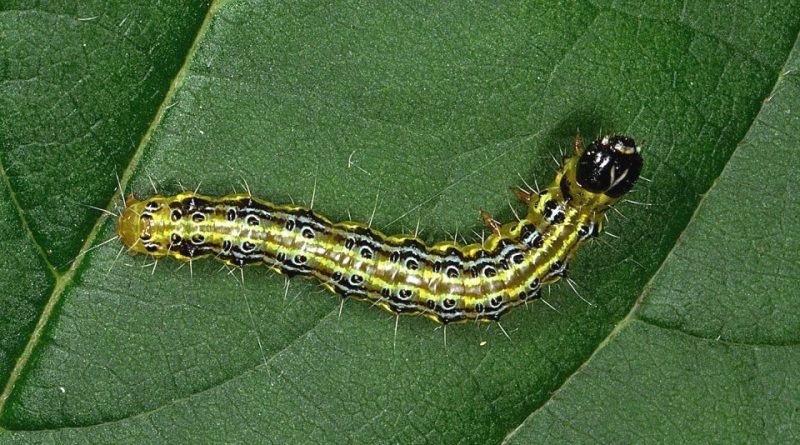 The box tree moth (Cydalima perspectalis, Walker, 1859) is a moth belonging to the Crambidae family.

Geographic Distribution and Habitat –
The box tree moth is a moth native to East Asia (Japan, China, Taiwan, Korea and India).
It was first introduced in Europe in Germany in 2006, in Switzerland and Germany in 2007, in France, Great Britain and Austria in 2009; it was also identified for the first time in Hungary, Romania and Turkey and its presence has also been registered in Slovakia, Belgium and Croatia.
During the preparation of the XXII Winter Olympic Games in Sochi (Russia), this species was introduced from Italy through the import and planting of Buxus sempervirens hedges.
The following year he began defoliating large quantities of local Buxus colchica. In 2013 its presence was registered in Denmark and in November 2018 the first discovery in North America was confirmed near Toronto in Canada.
Its first discovery in Italy, in Lombardy, dates back to July 2011.
This butterfly lives on various host plants: especially on Boxwood (Buxus spp.), Which is the preferential host. The species Buxus microphylla, Buxus microphylla var are particularly susceptible to attacks. insularis, Buxus sempervirens and Buxus sinica. The insect can develop, less frequently, even at the expense of another host, the Pachysandra (Pachysandra terminalis), an evergreen herbaceous plant, also belonging to the Buxaceae family, used for its dark green foliage that makes it a plant very suitable for shady spaces.

Morphology –
Cydalima perspectalis, at the adult stage, is a medium-sized butterfly, with a wingspan of about 4 cm.
The wings have a white, almost transparent background, with a wide brown band running along the edges that are slightly iridescent.
At the level of the front wings in the dark band there is a characteristic white spot; a second, on average, smaller white spot may sometimes be present. Melanistic adults have also been observed, with almost completely brown wings. The adult abdomen is white, with a brown tip.
The larvae, which are about 40 mm long when fully developed, have a green color and have a black head; they are also characterized by black and white streaks along the entire body.
After hatching, they have a length of 1–2 mm, and reach a maximum length of 35–40 mm within four weeks. At the beginning of the nymphosis the length of the larvae contracts.
The eggs initially have a pale yellow color then, as they mature, they show a small dark spot for transparency corresponding to the color of the head of the now formed larva. It is also possible to recognize them because they are laid by females in groups of 10-20, partially overlapping one another, on the underside of healthy leaves; they also have a diameter of 1 mm.
The chrysalises measure about 25-30 mm; initially they are green with black stripes along the dorsal part to become with the maturation of a dark brown color. They are well hidden within the vegetation, wrapped in a whitish silky cocoon.

Attitude and Life Cycle –
The box tree moth is a moth with a life cycle not fully known in Europe.
In Italy, the insect completes 2 or 3 generations a year and overwinters as a larva in a cocoon woven in autumn among the leaves. The following year, with the arrival of the first spring warmth, the larva completes its development and, after about 4 weeks of feeding, pupates hidden in the vegetation. At maturity, the adults flutter and, after mating, begin the first generation.
In the warmer climates of the import area of ​​the European continent, where cold weather conditions arrive later in the year, there can sometimes be up to four generations per year.
The damage is caused by the larvae of this moth which, being very voracious, can completely defoliate the Boxwood plants (and other species) in a short time. This is especially noticeable on parts that are regularly pruned (for example, in hedges), on the lower sides and branches of the canopy.
The larvae erode the leaves in different ways according to their stage of growth: the newly hatched larvae feed on the lower side of the leaves, leaving the upper side intact; the mature larvae feed on the entire leaf plate, leaving only the midrib intact. The larvae not only feed on the leaves and shoots, but also on the still green bark of the new branches.
Consequently, the attacked boxwood plants are therefore strongly defoliated and show a characteristic intertwining of silky threads between leaves and twigs. The affected hedges show spots of decay, with widespread yellowing on all or part of the vegetation. These symptoms may at first glance be mistaken for attacks of fungal agents but, upon closer examination, the diagnosis is easier due to the presence of the larval traces (white canvas similar to cobwebs and the presence of the droppings of the larvae) on the entire plant. .
Frequently the attack of Cydalima perspectalis is accompanied by a fungal disease caused by the Cylindrocladium buxicola Henricot fungus, which contributes to worsening the health of the plant by increasing the drying process of the leaf apparatus.

Ecological Role –
As mentioned, the larvae of Cydalima perspectalis feed on the leaves and shoots of the species of the genus Buxus. The young larvae feed only on the upper part of the leaves, but not on the more fibrous internal structure. The leaves are not destroyed completely, but the cuticle and epidermis appear damaged along parallel furrows, or entirely. Leaves without a cuticle often die off. The larvae that have reached the highest degree of development are those that most damage the plant, feeding on the entire leaf massively, sometimes leaving small portions of leaf in the center or on the outer sides of the leaf. The larva causes defoliation and therefore the death of the plant.
The trend of the populations of this moth, however, differ from range to range.
In the area of ​​origin (Asia) there are natural regulation mechanisms that limit the destructive behavior of Cydalima perspectalis. In the areas of recent accidental introduction, in Europe, the damage is very considerable since in the ecosystems where the exotic insect is introduced, natural regulation mechanisms are not available. In European areas where a predator of C. perspectalis is present, Vespa velutina, an alien insect also coming from South-East Asia, a certain level of predation has been observed. In southeastern France, where Vespa velutina was accidentally acclimatized in 2004 and C. perspectalis appeared in 2012, the wasp was observed to prey on small grubs or grubs in preparation for the cocoon for incisalidation. This does not make Vespa velutina an ideal candidate for biological control against C. perspectalis, because, being Vespa velutina an alien species, it is not possible to predict its adaptations and interactions in the host ecosystem. Unfortunately, however, the Vespa velutina is currently very harmful to bees that prey in large numbers. So entomologists and beekeepers are trying by all means to limit the spread and damage that this ‘exotic’ wasp causes to the environment.
A containment method of this moth can be adopted through biological control with Bacillus thuringiensis which can be used for its control.
Bacillus thuringiensis acts only on the young larvae of lepidoptera leading to muscle paralysis and therefore the correct timing of use is fundamental in the control result. The treatments must be performed about 2 or 3 times a year, in correspondence with the hatching of the eggs.
At the beginning of the infestation of Cydalima perspectalis, synthetic insecticides proved to be effective and easier to use. A research conducted in Romania has identified that the most effective active ingredients of all are methoxyfenozide (or methoxyphenozide), spinosad and chlorantraniliprole. The latter would be preferable for its selectivity towards bees, ladybugs and hoverflies.
Among the main active substances with a killing action are mentioned products with neurotoxic action and a broad spectrum of action, such as pyrethroids (deltamethrin, cypermethrin) or phosphoric esters (chlorpyrifos, in microcapsulated formulations), with a less favorable ecotoxicological profile, it can be justified for the management of the first infestations, in order to initially reduce the population levels of the harmful organism.
Growth regulators (Teflubenzuron) registered for use on ornamental plants can also be used with which good results can be obtained in relation to the control of juvenile forms. The treatments must be carried out by highly qualified personnel in full compliance with current legislation relating to plant protection products and carried out once a month from early June to the end of September in the coolest hours of the day. Given the slow growth of the Boxwood, it may be useful to integrate the chemical defense with appropriate fertilizations to the soil to favor the new emission of leaves and support the recovery of the plant.
However, it must be remembered that the treatments are exclusively curative and not preventive, therefore they must be carried out only in the presence of infestation in the field.
Finally, in addition to being necessary to ascertain the possibility of their use in the various countries, it should be noted that the use of insecticides is proving less and less appropriate in the medium – long term due to the collateral damage they cause both on the useful but also on the entomofauna. , in general, on all biocoenoses and for the presence of growing residues in the ecosystem.
An opportunity to develop may be the use of pheromone traps, which attract adult males, hindering mating with adult females and thus limiting the severity of damage as females deposit a greater amount of sterile eggs.
To date, however, their main usefulness is in monitoring flights which allows predicting the oviposition periods by optimizing the fight treatments.
In fact, it is the monitoring of the moth through pheromone traps with field sampling that allows you to understand when the insect is present and therefore to be able to intervene in a targeted and effective way with the different defense techniques.
Furthermore, in the case of weak infestations and for crops of limited extensions, it is possible to collect and destroy the larvae manually immediately after the eggs hatch.