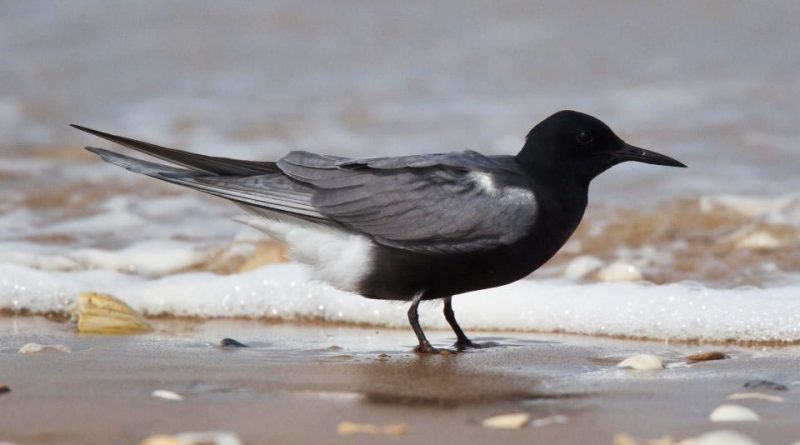 The black tern (Chlidonias niger, Linnaeus 1758) is a bird belonging to the Laridae family.

Geographic Distribution and Habitat –
The black tern is present on all continents while in Italy there are rare nesting within the Po Valley, in environments with the presence of water.
Its breeding habitat is freshwater swamps in most of Canada, the northern United States and much of Europe and western Asia. It usually nests on floating material in a swamp or on the ground very close to water, laying 2-4 eggs.
In England it was once abundant in the eastern marshes, especially in Lincolnshire and Cambridgeshire, until the early 19th century. The English naturalist Thomas Pennant in 1769 referred to “vast flocks” “whose calls are almost deafening”. The extensive drainage of its breeding grounds wiped out the English population around 1840. Intermittent attempts by this species to re-colonize England have been unsuccessful.
The North American Chlidonias niger migrates to the coasts of northern South America, some to the open ocean. The birds of the European continent overwinter in Africa.
The various populations are highly migratory and the European populations winter mainly along the western coasts of Africa.
In Italy, migrants go up through the Tyrrhenian regions and the Po Valley, while in autumn the movements seem more consistent in the southern regions and in the Strait of Sicily. Winter presences are completely irregular and refer to single individuals found in Emilia-Romagna, Veneto, Tuscany, Umbria and Sicily. The population is concentrated in some localities of the Vercelli and Novara areas; few couples are occasionally present in the Lower Lake of Mantua, in the Lagoon of Grado, and in the inland wetlands of the lower Ferrara and Ravenna areas. 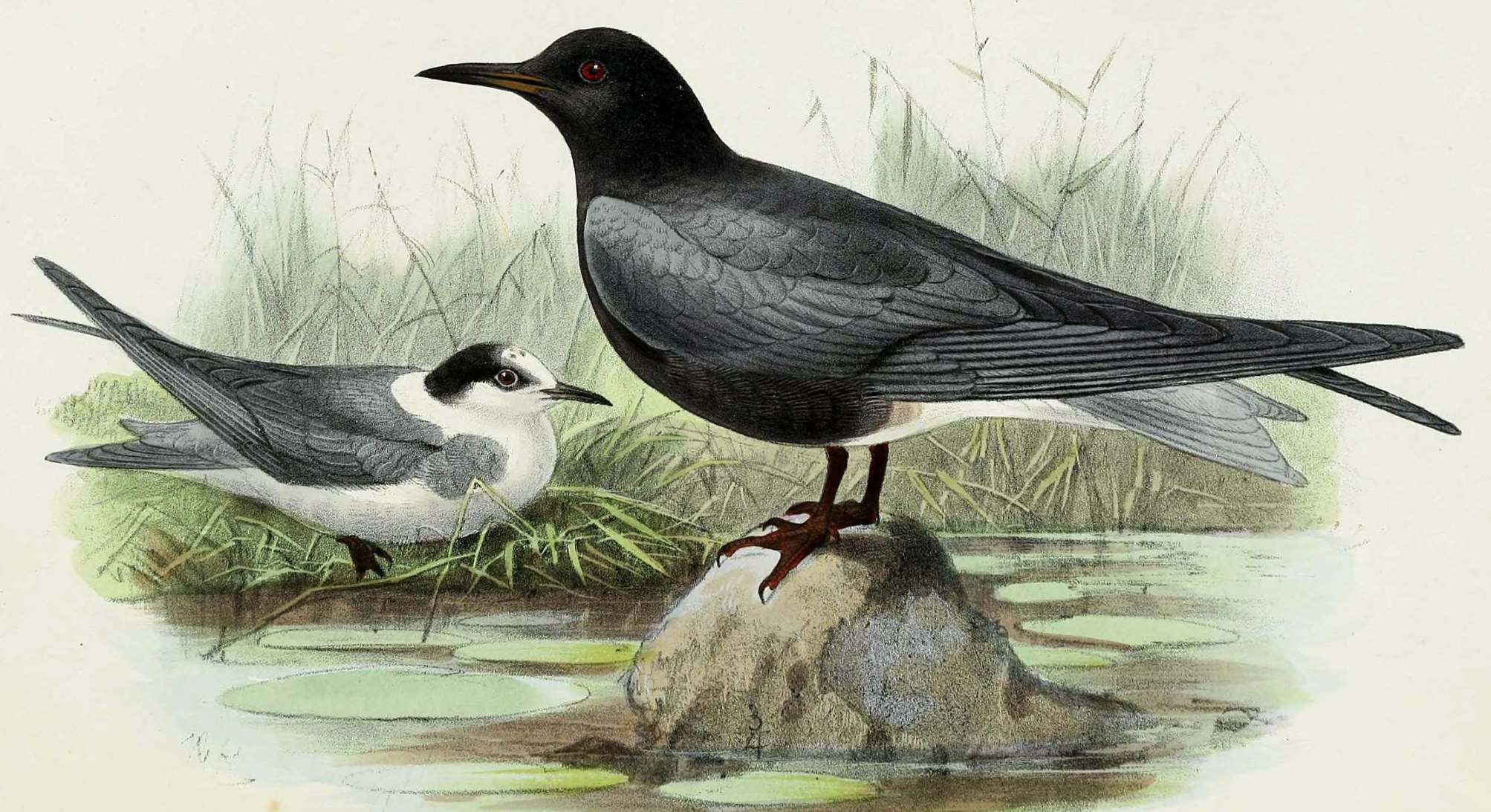 Description –
The black tern is a bird with a length of 23-26 cm, with a wingspan of 58-65 cm. It has no sexual dimorphism.
These birds, in wedding dress, have gray upper parts, including wings which are however blackish towards the ends.
The head, the chest and a good part of the abdomen are black, while the undertail and the back of the abdomen are white.
The beak and legs are black.
In the winter dress the parts of the body become all white except for some areas of the head and a gray “shoulder” that forms an almost incomplete collar towards the chest. Some internal parts of the wings, above, darken and the legs become dark red.
The juveniles are remarkably similar to the adults in winter dress, however, having more black on the head and a gray – brown back with lighter edging of the coverts.

Biology –
The Black Tern nests in the period between mid-May and the end of June and both partners build the nest with plant material that is placed on floating plants or on unbroken reeds, or, after having dug a gutter on the damp soil among the marsh vegetation.
Here 2-3 eggs are laid and there is a single annual brood. Hatching is asynchronous. The incubation lasts 21-22 days. The flight takes place about 19-25 days after hatching.

Ecological Role –
The Chlidonias niger is a bird that needs calm and swampy inland waters, rich in floating or bottom-dwelling plants; it also uses rice fields. It frequents the sea coasts only during migrations. When it hunts for insects, it elegantly flies over low-lying waters. It can catch aquatic insects, tadpoles, small frogs and fish. These birds do not dive to fish, but forage on the wing by picking up objects on or near the water surface or by catching insects in flight.
In Italy it is a breeding, migratory and occasional winter visitor. The pre-nuptial movements are detected between April and the beginning of June, with peaks in the first ten days of May, the post-nuptial ones between mid-July and the beginning of October, with peaks in August-September.
In this species, the “dances of love” are very fascinating. This courtship ritual is usually carried out by the male carrying a fish in his beak, and dancing – emitting the typical call – around the female.
The Italian breeding population is estimated at 120 pairs.
The threats for Chlidonias niger are represented by the transformation of the nesting and feeding habitat and by agricultural mechanization.
Among the conservation measures it should be remembered that in Europe it is listed in Annex I of the Birds Directive (79/409 / EEC).