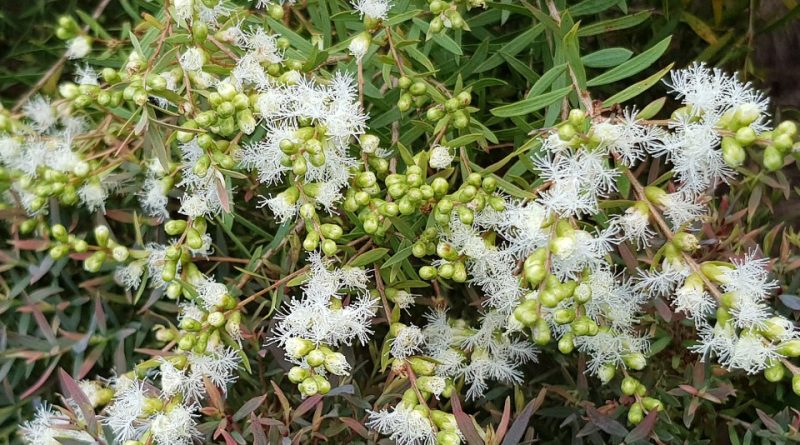 Etymology –
The term Melaleuca comes from the Greek μέλας mélas black and from λευκός leucós white; on this name, used by Linnaeus, William Jackson Hooker writes: “μέλας, black, and λευκός, white; the same as Caja-puti, or white tree, the Malay name of the original species and therefore also called Leucadendron and Arbor alba . ”
The specific epithet linariifolia comes from the genus Linaria (from Linum, from the Greek λίνον línon, which became linum in Latin: flax, due to the leaves similar to those of flax) linaiola and from folium leaf: with leaves like those of the linaiola.

Geographic Distribution and Habitat –
Melaleuca linariifolia is an endemic plant of eastern Australia.
This plant has a distribution in the Maryborough areas of Queensland at Bawley Point in the borough of Ulladulla in New South Wales.
There is also a disjoint population in Queensland’s Blackdown Tableland National Park.
Its habitat is that of moorland and dry sclerophyllous forests; it usually grows near streams or swamps, near the coast, even on coastal plateaus, often on shale. 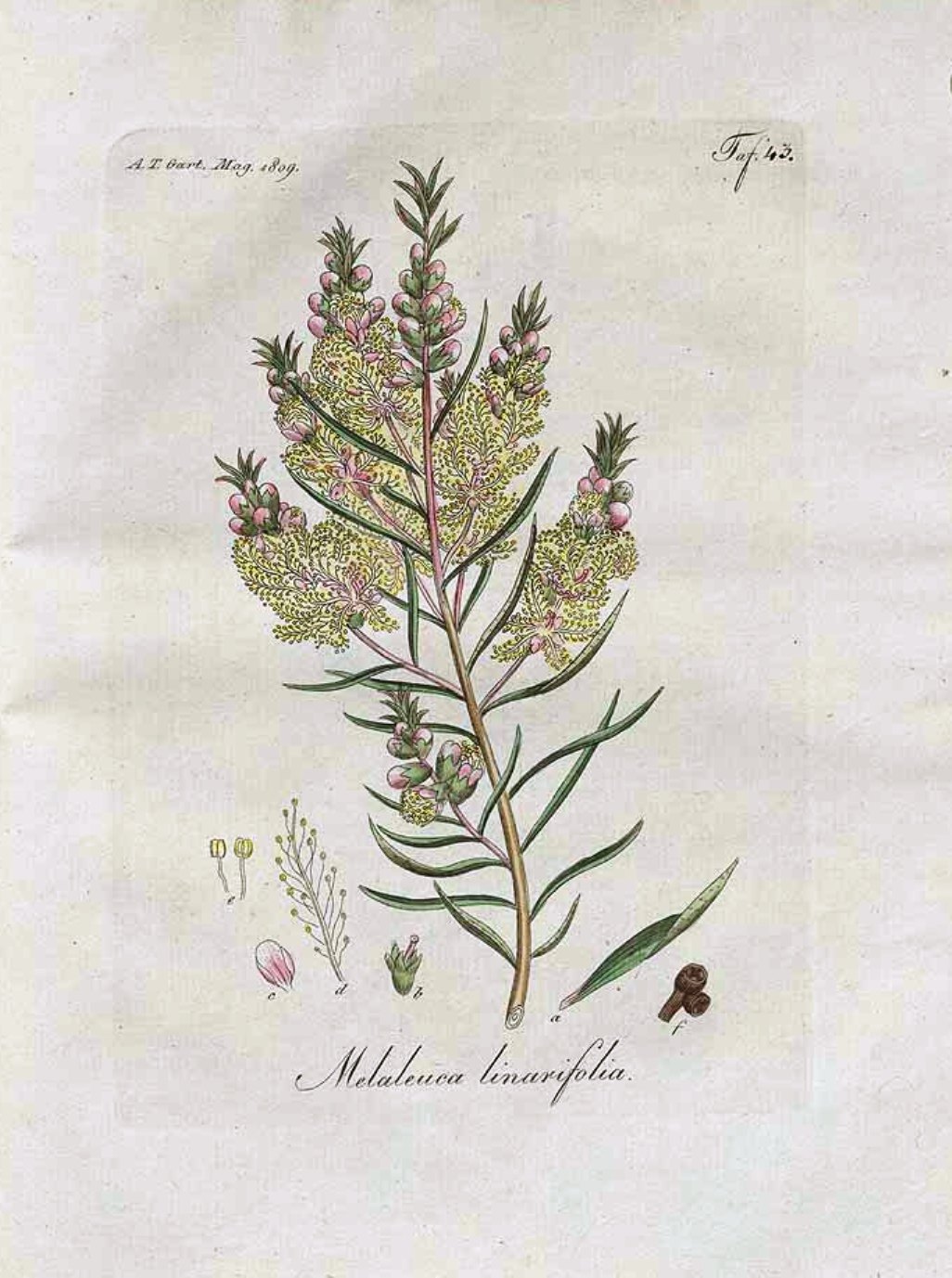 Description –
Melaleuca linariifolia is a small evergreen tree or shrub that grows to a height of 6-10m.
It has a distinctive and attractive white or creamy white, papery bark and a dense crown.
Its leaves are arranged in alternating pairs, glabrous except when very young, 17–45 mm long, 1–4 mm wide, linear to lanceolate and with an evident medium vein.
The flowers are white to creamy white in color, fragrant and arranged in spikes at the ends of the branches that continue to grow after flowering, sometimes even at the upper axil of the leaves. Each spike is up to 40mm wide and long and contains 4 to 20 single flowers. The petals are 2.5-3.3mm long and fall off as the flower matures. The stamens are arranged in five bundles around the flower and each bundle contains 32 to 73 stamens.
The flowers bloom for a relatively short period between October and February and are followed by fruits which are woody capsules, 2.5-4mm long and 4-5mm long scattered along the stems. Fruiting capsules have valves that do not protrude beyond the edge of the capsule.

Cultivation –
Melaleuca linariifolia is a shrub that is harvested in its natural state for local use as a medicine and source of essential oil. This plant is also subject to cultivation as a hedge.
This plant is found from the warm temperate zone to the tropics, growing in both semi-arid and humid climates. Plants tolerate occasional low temperatures down to around -5 ° C when dormant, especially if the previous growing season was warm enough for the wood to fully mature.
It requires fertile, well-drained, limestone-free soil that retains moisture and grown in full sun.
This plant prefers soil that doesn’t contain a lot of nitrogen.
The seed takes about 12 months to develop on the plant, the woody seed capsules persist for 3 or more years.
Pruning is best done after the plants have flowered with the intention of maintaining a compact habit.
Propagation occurs by seed which is sown on the surface in spring or autumn in pots with constantly humid soil in a warm greenhouse.
It is recommended to immerse in 5 cm of water without watering from above. It is grown until the seedlings are 0.5 cm tall, then removed from the water and potted a week later.
The seedlings must then be grown at least for their first winter in a greenhouse and then planted in late spring or early summer, after the last foreseen frosts. It is also advisable to give the plants protection from the cold for the first winters outdoors.
Propagation can take place by semi-mature cuttings in the period of July / August.
Melaleuca linariifolia is a plant that freely hybridizes with other members of this genus.

Customs and Traditions –
Melaleuca linariifolia was first formally described in 1797 by James Edward Smith in Transactions of the Linnean Society of London.
This plant is grown as an ornamental tree for parks and gardens and is also used as a screen or windbreak in Australia and abroad.
It should be planted with caution as it can damage sewage pipes and is highly flammable, so it should not be planted in fire hazard areas.
From an ecological point of view it is a source of food and habitat suitable for native animals, including many insects.
From this plant we get an essential oil obtained from fresh leaves and twigs, with antibacterial properties.
This essential oil is used for various uses:
– it is one of the most important natural antiseptics and deserves a place in every pharmacy;
– it is useful for the treatment of bites, burns, wounds and skin infections of all kinds;
– it is strongly antiseptic, diaphoretic and expectorant;
– stimulates the immune system and is effective against a wide range of bacterial and fungal infections.
It is also used for internal use in the treatment of chronic infections and some acute infections, especially cystitis, glandular fever and chronic fatigue syndrome.
It is used externally in the treatment of thrush, vaginal infections, acne, athlete’s foot, warts, warts, insect bites, cold sores and nits.
It is applied neat to warts, warts and nits, but is diluted with a carrier oil such as almond for other uses.
The oil contains about 40% terpinen-4-ol which is well tolerated by the skin and 5% cineole which is irritating. However, in poor quality oils, cineole levels can exceed 10% and in some cases up to 65%.
Essential oil is used in aromatherapy.
The essential oil obtained from the leaves has a nutmeg scent and is used in medicine and in soaps.
Among other uses, this plant can be used for vegetation cover in suitable climates.
The wood of Melaleuca linariifolia is very resistant in moist or wet soil conditions.

Preparation Method –
Of the Melaleuca linariifolia both the fresh leaves and the twigs are used from which an essential oil is extracted with properties for internal or external uses.
It is applied for various uses and is widely used in traditional medicine in the areas where this plant grows spontaneously.