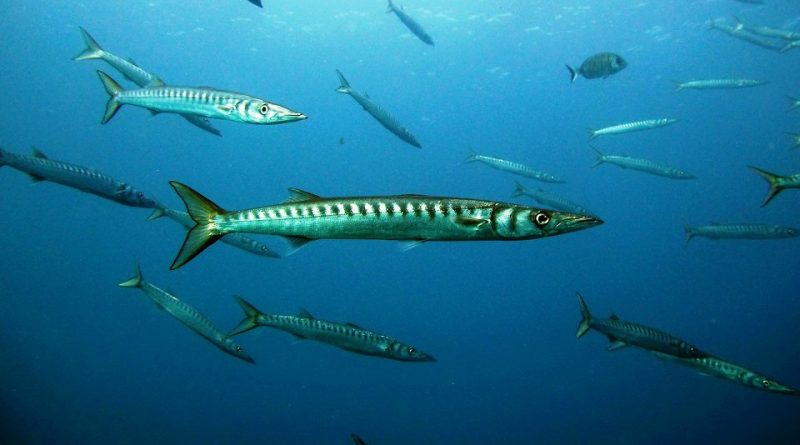 The yellowmouth barracuda or yellow barracuda (Sphyraena viridensis Cuvier, 1829) is a saltwater fish belonging to the Sphyraenidae family.

Geographic Distribution and Habitat –
Sphyraena viridensis is a fish that lives in an area that includes the central-eastern Atlantic around the Azores, Madeira, Cape Verde Islands and Canary Islands and has been recorded in the eastern Mediterranean off the coast of Lebanon; sightings have been made in the Mediterranean in the Adriatic Sea, in the Aegean Sea, off the coast of Israel, Algeria, Corsica and Sicily.
This fish, once confined to a narrow basin of the eastern Atlantic (Cape Verde, Canaries and Azores), probably due to climate change, is increasingly reported in the Mediterranean basin. The rise in the temperature of the Mediterranean waters has in fact created an ideal environment for the species, which has rapidly spread to the point that it is now commonly referred to as the Mediterranean barracuda, often confusing it with the only other spyrenide present in our waters, the sea ​​pike (Sphyraena sphyraena), from which, however, the scaleless preoperculum, the characteristic vertical bands and the decidedly larger dimensions differentiate it.
The habitat of the Sphyraena viridensis is generally offshore (it is a pelagic fish) but it can be approached above all to the islands and promontories, near sheer cliffs and high and rocky coasts. It lives up to 100 meters deep. 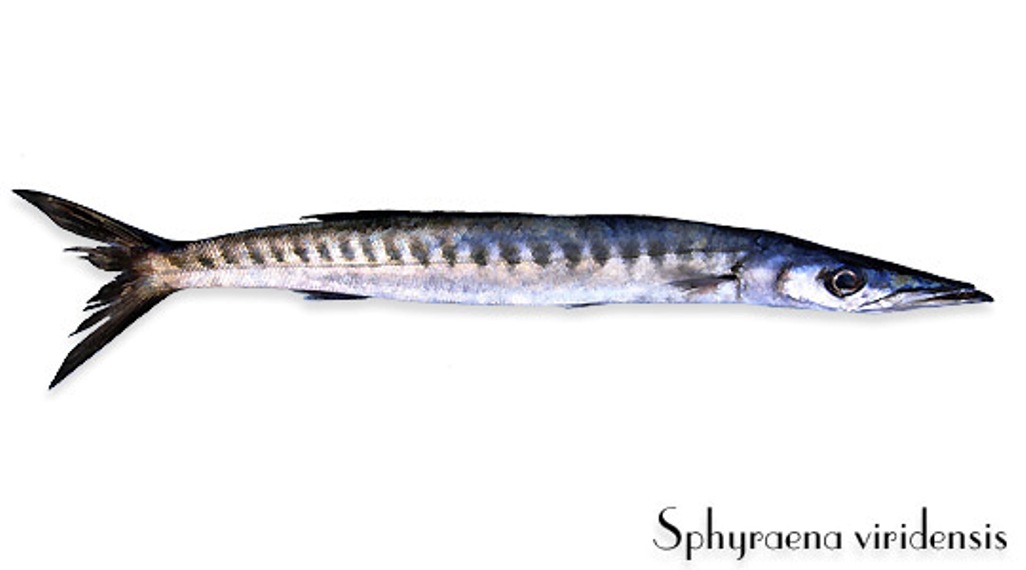 Description –
The yellowmouth barracuda is a fish that is recognized by its tapered shape, with a conical and sharp snout. It can reach a length of 1.30 m. The average weight is between 1 and 3 kg but some specimens, especially in the Atlantic, can reach 10-12 kg.
The dorsal and ventral profiles are very similar and almost straight.
It has the body covered with small scales, except, unlike the congener Sphyraena sphyraena, in the preoperculum. The lateral line is clearly visible. The head is well developed and with a pointed muzzle.
The mouth, with a very prominent and not very protractile jaw, has two rows of very sharp teeth; other teeth are present on the palate. The maxilla does not reach the anterior margin of the eye.
The dorsal fins are spaced apart. The first is small and made up of 5 spiny rays; it has a triangular shape and is inserted in the middle of the body, slightly before the ventral ones. The second dorsal originates in the last quarter of the back, slightly before the anal; it is higher than the first ridge, but is always not very extended. The pectorals are small and stretched backwards do not reach the beginning of the ventral ones. The ventral ones are also small. The caudal fin is deeply forked, with pointed lobes.
The body has a bluish-green color, dorsally tending to dark brown and along the sides it has bluish shades, with bluish shades towards the sides, which become silvery-white going towards the ventral area. The characteristic 20-22 dark bands appear along the flanks, more evident in the larger specimens. The ventral fins have a whitish anterior margin. The inside of the mouth is yellowish, hence the name in Italian.

Biology –
The yellowmouth barracuda is a pelagic fish that gathers in numerous schools, but at times it comes very close to the coast, especially at night, even in very shallow waters.
The spawning period occurs in late spring or early summer and the eggs are pelagic.
The fry look for quiet environments rich in food such as the mouths of rivers or coastal inlets; reached 5 cm in length they reach the open sea.

Ecological Role –
The Sphyraena viridensis is a fish, as mentioned, which tends to move in numerous groups and has carnivorous food habits as it feeds mainly on fish, cephalopods and crustaceans.
Its presence in the Mediterranean was once considered rare, but over the years the sightings have become more and more frequent, especially near the southern islands and the Tyrrhenian Sea. Also reported in the Adriatic.
In the areas of greater diffusion it forms, in the summer period, schools of up to 180 fish, although most of the schools contain 30-40 fish, in areas where there are strong currents. These schools consist predominantly of younger fish with the younger ones closer to the surface and the older ones, usually females, on the bottom of the reef at depths of up to 30m. In winter, the only aggregations are small groups of young people in shallow bays. No territorial behavior was observed.
This species does not appear to mix with other barracuda species in mixed schools, but there are reports of these fish associating with whale sharks in the Azores and an example of them actively swimming towards a Mobula tarapacana manta ray.
In the Azores the juveniles of Sphyraena viridensis are preyed upon by the lizardfish (Synodus saurus Linnaeus, 1758), this predation shows that there is an overlap of habitat between the young barracudas and the lizardfish which are found in sheltered and very closed bays with sandy substrates.
Sphyraena viridensis in recent times, as mentioned, has arrived in small quantities in the eastern Mediterranean and fished by fishermen using trammel nets and beach seines. It has been reported from markets in Turkey, but is generally caught as a by-catch, although as numbers increase in the Mediterranean it may become a more important species for fishing.
The meat of this fish is widely appreciated, by some considered good and by others of low value.