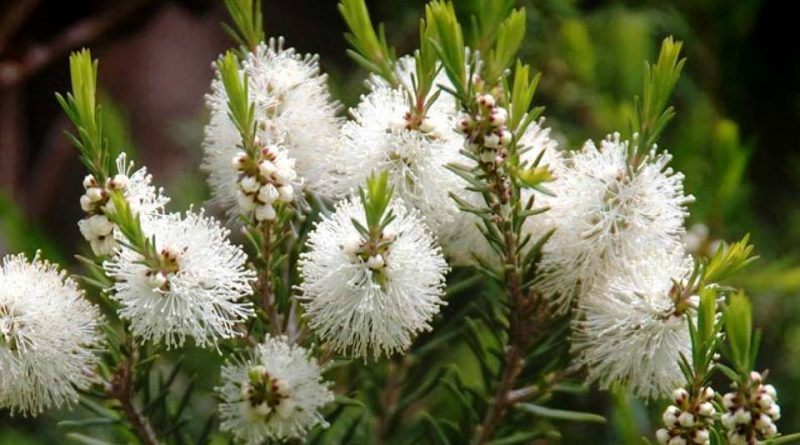 Etymology –
The term Melaleuca comes from the Greek μέλας mélas black and from λευκός leucós white; on this name, used by Linnaeus, William Jackson Hooker writes: “μέλας, black, and λευκός, white; the same as Caja-puti, or white tree, the Malay name of the original species and therefore also called Leucadendron and Arbor alba . ”
The specific epithet alternifolia comes from alternus alternato and fólium leaf: due to the alternate arrangement of the leaves.

Geographic Distribution and Habitat –
Melaleuca alternifolia is an endemic species of Australia and is found in the area from the district of Grafton in New South Wales to the hinterland to Stroud and in the coastal districts north of Maryborough in Queensland.
Its growth habitat is near streams and marshes, often in dense, impenetrable thickets, usually in the marshes along the coast, at altitudes up to 300 meters. It is often the dominant species in its habitat. 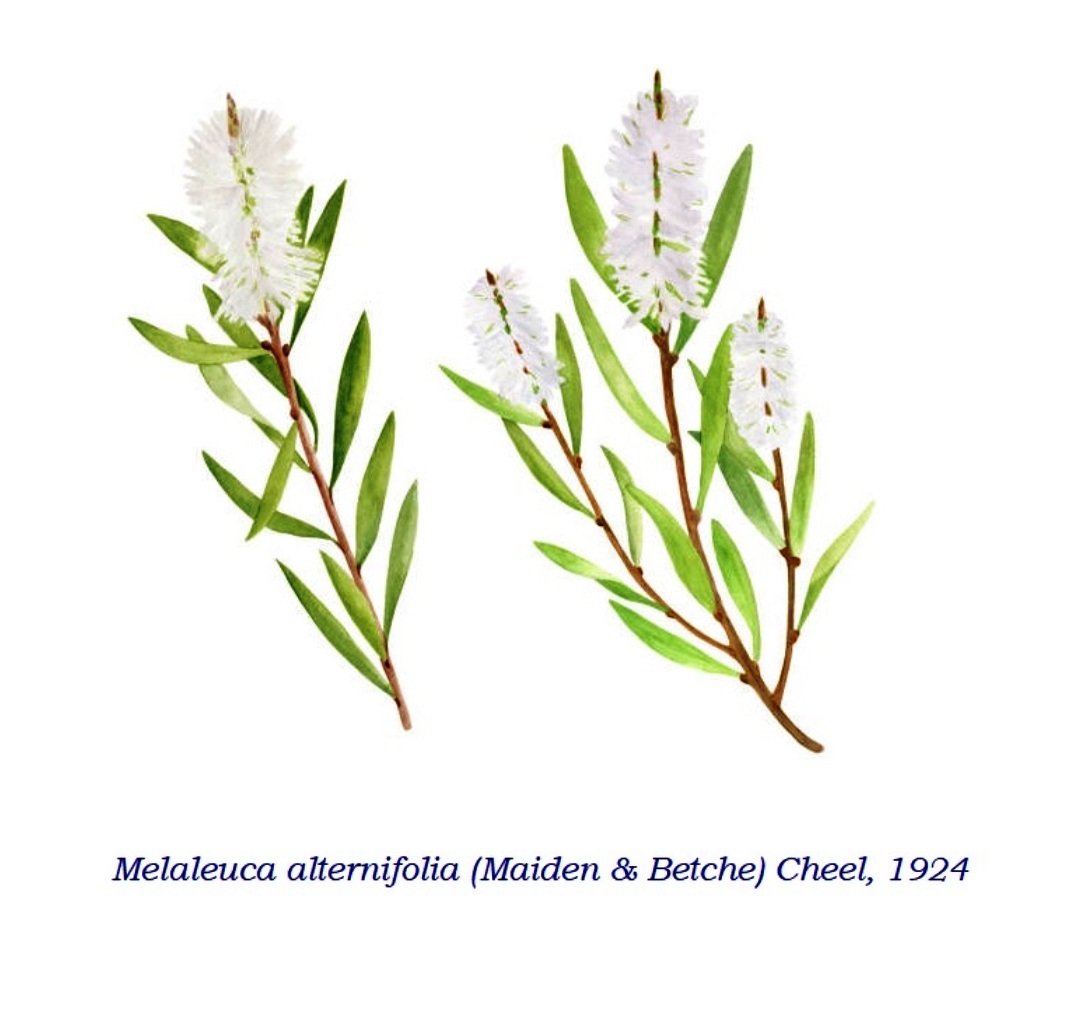 Description –
The tea tree is a medium-sized evergreen tree or shrub that grows up to 7 meters in height.
The leaves are linear, 10 to 35 mm long and 1 mm thick.
The flowers are white, gathered in 3 to 5 cm long clusters.
The fruits are woody and cup-shaped and have a diameter of 2-3 mm.

Cultivation –
Melaleuca alternifolia is a plant that grows well in a wide range of soils and climates. It prefers moist but well-drained soils and exposure in full sun. Plants are shade tolerant.
For a profitable cultivation it requires fertile, well-drained, limestone-free soil that retains moisture, does not contain much nitrogen and with a pH between 4.5 and 7.
It is a plant of the warm and humid subtropical areas of eastern Australia, where it can be found at altitudes of up to 300 meters, the plant is also sometimes cultivated as an ornamental species in tropical areas.
It grows spontaneously in frost-free areas, where daytime temperatures can vary from 17 – 19 ° C up to 27 – 31 ° C and the average annual rainfall is 1,000 – 1,600 mm.
The collection of leafy twigs to obtain the essential oil begins 15 – 18 months after planting the plants, and subsequently at intervals of 12 – 15 months.
The shoots are cut when they are less than 2 cm in diameter and 5 – 10 cm above the ground level.
The annual yield of the sprouts is about 8 – 10 tons per hectare, the sprouts have an oil content of 1 – 2%.
Propagation occurs by seed with surface sowing on a pot with soil kept constantly humid. It can be grown in water until the seedlings are 0.5 cm tall, then removed from the water and overgrown a week later. Seedlings tend to dull when grown this way.
The seed takes about 12 months to develop on the plant, the woody seed capsules persist for 3 or more years.
Propagation can also occur by cuttings of semi-mature lateral shoots.
As for pruning, this is best done after the plants have bloomed with the intention of maintaining a compact habit.
The plant easily hybridizes with other members of this genus.

Customs and Traditions –
The tea tree is the source of an essential oil, with a very strong odor, which is responsible for the properties that are attributed to this plant, such as those strongly antiseptic.
It has been used as a treatment in folk medicine for nearly a century in Australia. Indigenous Australians of inland eastern areas use this plant by inhaling the oils from the crushed leaves to treat coughs and colds. They also spray the leaves on the wounds, after which a poultice is applied. Additionally, the tea tree leaves are soaked to make an infusion to treat a sore throat or skin ailments.
It is exported in large quantities from Australia where the plant is sometimes grown.
The essential oils it produces are the main source for the commercial production of tea tree oil, a local fungicide and antibacterial, better known as “Tea Tree Oil” or “tea tree”. The name was given to it by Captain James Cook, who recognized the possibility of obtaining a drink similar to a spiced tea. This essence is produced by distillation from the leaves.
Essential oils are characterized by a high content of terpinene-4-ol (greater than 30%) and a low content of cineole (less than 15%), already known by the aboriginal populations who used the bark.
It is useful for treating bites, burns, wounds and skin infections of all kinds.
The essential oil obtained from the leaves and twigs is strongly antiseptic, diaphoretic and expectorant.
It stimulates the immune system and is effective against a wide range of bacterial and fungal infections.
It is used internally in the treatment of chronic infections and some acute infections, in particular cystitis, glandular fever and chronic fatigue syndrome.
It is used externally in the treatment of thrush, vaginal infections, acne, athlete’s foot, warts, insect bites, cold sores and nits.
It is diluted with a carrier oil such as almond oil.
The essential oil is also used in aromatherapy.
The oil is also of interest in the perfume industry, as it blends well with other oils while contributing its distinctive note to soaps, deodorants and colognes.
The wood of Melaleuca alternifolia is very resistant to water and useful for the manufacture of small canoes or tools. Its pungent leaves were soaked in water to prepare a remedy for coughs, headaches, wounds and skin lesions.
Among the contraindications, remember that essential oil should not be ingested in large quantities due to its toxicity and can cause skin irritation if used locally in high concentrations.
No deaths have been reported in the medical literature. However, there have been reports of poisoning when used on open wounds; even normal use on intact skin can cause cases of slight irritation and dermatitis.

Preparation Method –
Melaleuca alternifolia essential oil can be used internally in the treatment of chronic infections and some acute infections, in particular cystitis, glandular fever and chronic fatigue syndrome.
It is also used externally in the treatment of thrush, vaginal infections, acne, athlete’s foot, warts, insect bites, cold sores, and nits.
It is used diluted with a carrier oil such as almond or olive oil and is also used in aromatherapy.
The oil must not be ingested.