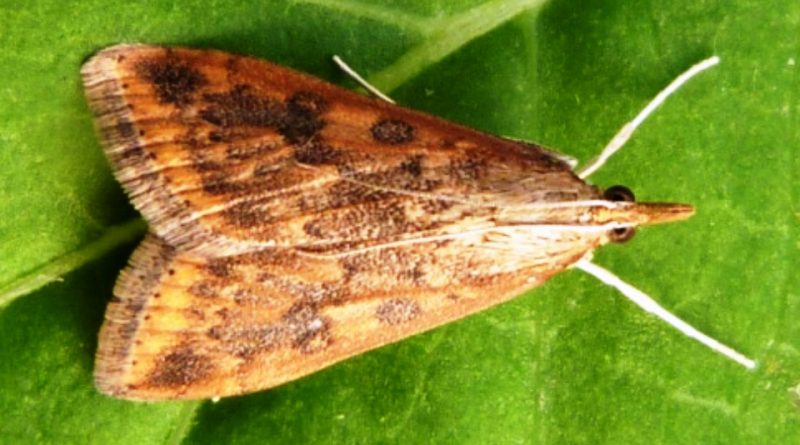 The rusty dot pearl (Udea ferrugalis Hübner, 1796) is a moth belonging to the Crambidae family.

Geographic Distribution and Habitat –
The rusty dot pearl is an insect found in various areas such as central and southern Europe, Asia Minor, Africa, India and Japan.
It is a polyphagous species that feeds on various plants, including cultivated ones, such as Soya, Chard, Pepper, Bean, Radicchio and other vegetables, of which it attacks both the leaves and pods that are still green, or other plants such as: Stachys, Eupatorium cannabinum and strawberry. wild.

Morphology –
Udea ferrugalis was first described by Jacob Hübner in 1796 and is a small butterfly which, in the adult stage, is yellow-brown in color.
It has a wingspan of 18-22 mm, with yellow, brown or ferruginous front wings and indistinct dark brown or blackish markings prominent towards the edge. The hind wings are brownish gray.
The legs are whitish.
The larvae are about 10-15 mm long, greenish in color and with a yellowish head; a dark median and longitudinal line completes the livery.

Attitude and Life Cycle –
Udea ferrugalis is a moth that overwinters as a chrysalis, sheltered in the ground. Arrived in the period of late spring, first days of June (depending on the latitude) there is the flickering of the adults; these are immediately carried on the vegetation where they lay, in small plates, on the leaves.
This generation is generally followed by two more, and always depending on the climate; the flickering occurs in July and in September-October.
The larvae of the last generation, when they have reached maturity, crystallize to overwinter and flicker the following year.
The trophic activity of the larvae causes damage that occurs on the leaves that are eroded or even on the green pods.
The leaves then appear sclerotic and the pods eroded and damaged.

Ecological Role –
The rusty dot pearl, as mentioned, is a small moth whose larvae feed on various spontaneous plants but also on cultivated plants such as: Soybean, Chard, Pepper, Bean, Radicchio and other vegetables, of which it attacks both the leaves and the still green pods ,
The fight against Udea ferrugalis has so far been of a chemical nature; currently it is only rarely needed and moreover it has been understood that better intercropping and crop rotation significantly lowers the intensity of infestations.