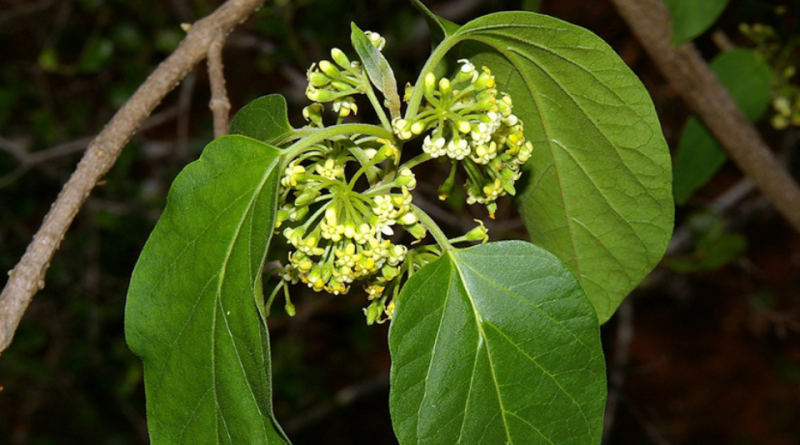 Etymology –
The term Marsdenia of the genus was dedicated to the British orientalist and botanist, born in Ireland, William Marsden (1754-1836), of the British East India Co., who herbalized in Sumatra.
The sepcific epithet cundurango is of origin of the American Spanish condurango, cundurango, from Quechua kunturánku, literally takes its local name, vine of the condor or vine of the eagle, from the large and heavy eagles of the condor that often use this robust vine as perches and perches.

Geographic Distribution and Habitat –
Marsdenia cundurango is a plant native to Peru and Ecuador and Colombia, in western South America, on the slopes of the Andes.
Its habitat is that of high mountain areas, jungles and rainforests between 2,000 and 3,000 m of altitude. 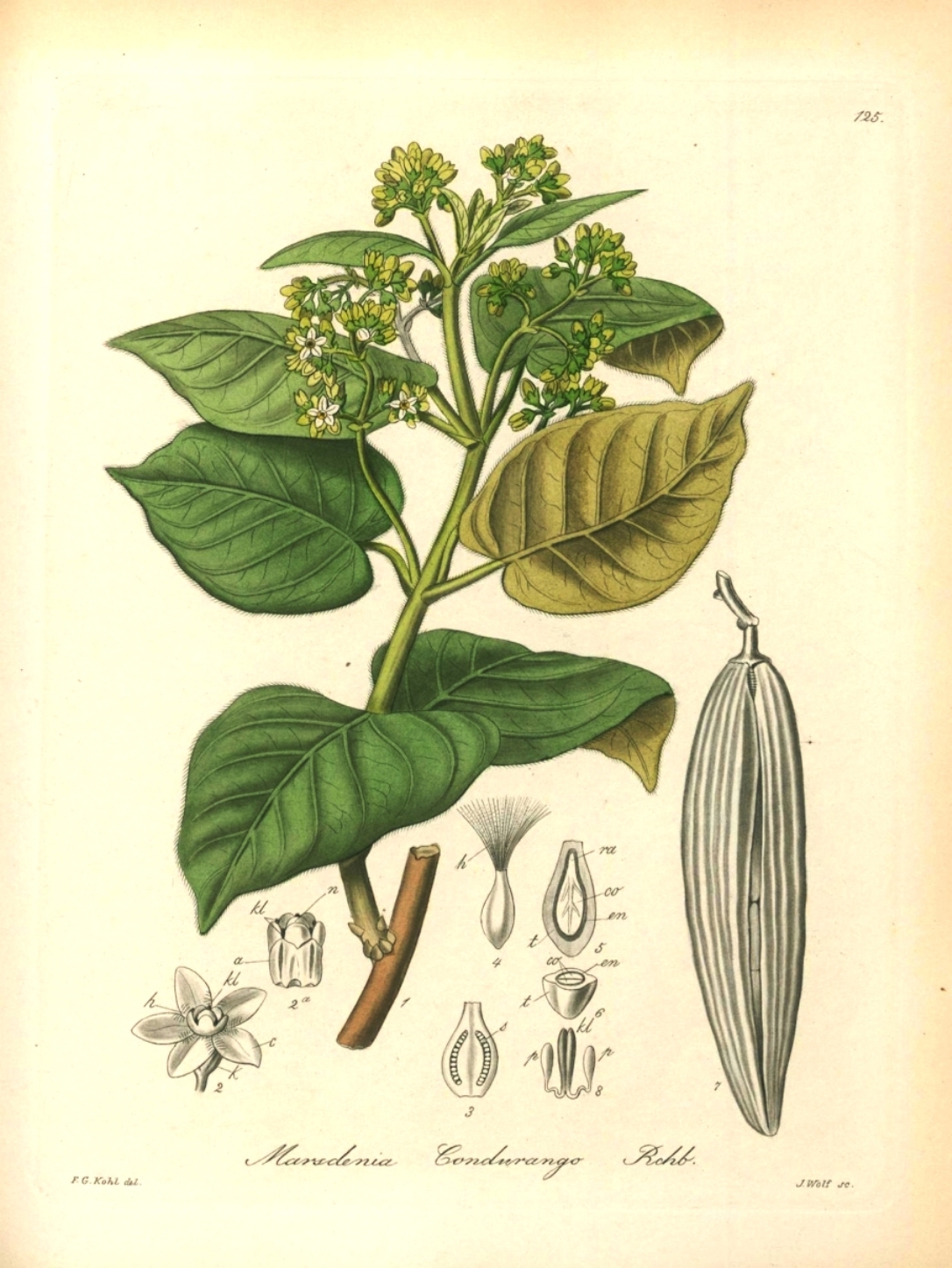 Description –
The Condurango is a tropical woody vine that grows up to about 10 m. The plant grows up to The vine grows to about 0.60 meters in diameter and is quite woody and sturdy.
The leaves are velvety in the shape of a heart.
The flowers are small and greenish light brown in the shape of a funnel and in umbel inflorescences.

Cultivation –
Marsdenia cundurango is a vigorous climbing shrub that has a long history of traditional use and is often harvested in the wild. It has become increasingly popular in modern herbal medicine, particularly for the treatment of digestive problems.
The plant can be grown in areas with conditions similar to where it grows in nature and can be propagated by seed.

Customs and Traditions –
Marsdenia cundurango is a plant that has been used by local populations since ancient times for a variety of digestive and stomach problems.
The plant aids digestion by being a bitter stimulant to increase digestive juices. It is also used to relieve nausea and vomiting, to calm the nervous stomach, to relieve stomach pain and cramps, for stomach ulcers, and to increase bile in the gallbladder, liver and pancreas.
The Condurango was introduced for the first time in the United States in 1871 in an official way; it was delivered to the State Department in Washington by the Minister of Ecuador with official certificates from Ecuadorian doctors attesting to its ability to treat stomach cancer and syphilis. Although it was never really proven effective for cancer during those early years, it became a reliable remedy for digestive disorders in the late 1800s and early 1900s and was included in the United States Pharmacopoeia and many other European pharmacopoeias. .
In Peru’s current herbal medicine systems it is considered an analgesic, appetite stimulant, carminative (expels intestinal gas), cholagogue (increases gallbladder bile), hemostatic (stops bleeding), stomachic (aids digestion) and tonic. It is often used for a variety of digestive disorders and is especially recommended for bleeding stomach ulcers. In Brazil, condurango is used for loss of appetite, dyspepsia, gastralgia, gastritis, neuralgia, stomach pain, stomach cancer, stomach ulcers and rheumatism.
Condurango would have anti-inflammatory and antioxidant actions in animal studies. In test-tube studies, it has been shown to be highly active against the mycobacterium that causes tuberculosis, but inactive against any of the viral strains it has been tested against. Its use as a digestive aid was studied and validated in the mid-1980s, when scientists reported that it increased various digestive enzymes and juices in the stomach.
Condurango has been used for more than 100 years as a remedy for many types of stomach and digestive problems in the United States. It continues to be a great remedy for calming a nervous and upset stomach, relieving stomach pain, nausea and intestinal gas, and for being a bitter digestive tonic in general for slow or bad digestion and to stimulate appetite.
It is also used to treat neuralgia and rheumatism.
Condurango contains a group of new glycosides and steroids. More than 100 years after it was introduced in the West as an active plant against cancer, a group of Japanese scientists have published several studies and filed several Japanese and US patents on these new compounds as anticancer substances, since the 1980s. It is said to contain 1 to 3% of these various glycosides on average. However, since these patents were filed, research has not progressed further in animal and human studies, and the true anticancer effect in humans still remains unknown today.
Other constituents of condurango include hydroxylated derivatives of pregnane, chlorogenic and caffeic acids, as well as various cyclitols (condutyrol), flavonoids and coumarin derivatives.

Preparation Method –
Both fresh and dried leaves and bark are used for Marsdenia cundurango.
With these you can prepare a decoction.
A decoction of the bark is drunk as a cure for cancer.