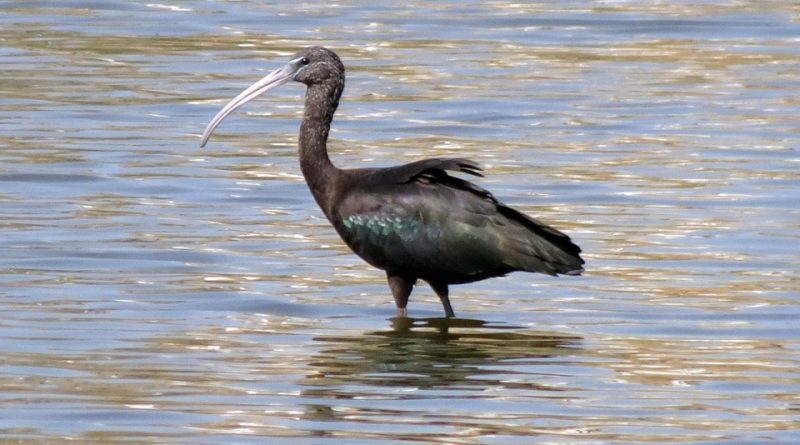 The glossy ibis ​​(Plegadis falcinellus, Linnaeus, 1766) is a bird belonging to the Threskiornithidae family.

Geographic Distribution and Habitat –
The Plegadis falcinellus is a bird that reproduces in various sites of the warm regions of Europe, Asia, Africa, Australia and in the Atlantic and Caribbean regions of the Americas.
Its origin is probably Eurasian from where it naturally spread from Africa to northern South America in the 19th century and later to North America.
It is a migratory species with most of the European birds wintering in Africa and North America; North Carolina birds overwinter further south.
Furthermore, although it is thought to be a migratory species in India, it is resident in the western Indian area.
Plegadis falcinellus is gradually declining in Europe, although it has recently established a breeding colony in southern Spain and there appears to be a growing trend for Spanish birds to overwinter in Britain and Ireland, with at least 22 sightings in 2010.
In Italy it nests in some humid areas of the Po Valley and Tuscany where it usually arrives in spring, even if there are occasionally – especially in Sardinia – wintering individuals.
A large population can be observed in the Biviere di Gela nature reserve. Since 1999 it has returned to nest in the basin of Lake Chiusi in the lower Val di Chiana in Tuscany. In May 2011, a group of 4 specimens was observed in the paddy fields of the Pavese, near Vigevano. In spring 2014 some couples nested in the wetlands around Castelvolturno. Also in the spring of 2017, the glossy dog ​​nested in the province of Caserta, not far from Castelvolturno.
Its habitat is linked to the nesting areas which are represented by wetlands of fresh or brackish water with high and dense banks of emerging vegetation such as reeds, papyrus or rushes and low trees or bushes. It shows a preference for swamps at the edges of lakes and rivers, but can also be found in lagoons, floodplains, wet meadows, swamps, reservoirs, sewer ponds, rice paddies, and irrigated farmland.
It is found less commonly in coastal locations such as estuaries, deltas, salt flats, and coastal lagoons. Preferred resting sites are normally in large trees which may be distant from feeding areas. 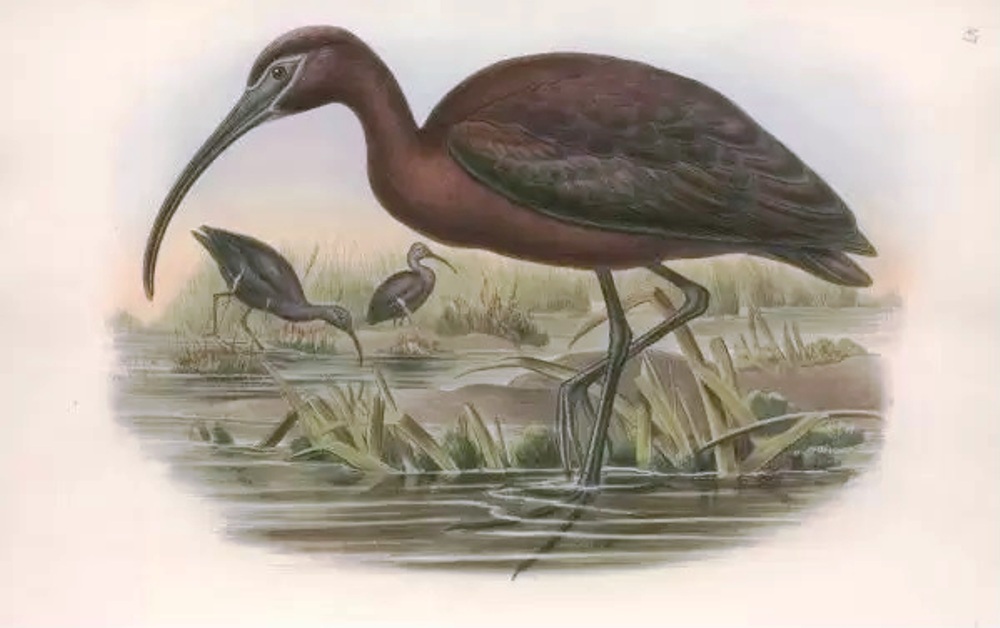 Description –
The glossy ibis is a medium-sized bird, with a height of 53–65 cm and a wingspan of 80–95 cm.
This bird is recognized by its long beak curved downwards and the long legs typical of waders.
The male and the female are indistinguishable from the livery, which in the summer aspect has a brick red back, chest, neck, shoulders, part of the abdomen and head, with metallic green reflections.
The wings and the other parts are mainly blackish, the greenish face with a double white streak starting from the eye up to the beak.
The legs have a dark pink color.
The winter livery, as well as that of the young individuals, has a more modest appearance, being mainly on the brown with small paler spots.
Characteristic are its metallic reflections that stand out in the sunlight and mingle with the reflections of the marshes, the usual hunting ground for the species.

Biology –
The Plegadis falcinellus is a bird that nests in late spring in wetlands of fresh or brackish water.
The nest has the shape of a platform of twigs and vegetation positioned at least 1m above the water, sometimes up to 7m, positioned in tall, dense shoals of emerging vegetation, low trees or bushes.
The female lays 3 to 4 eggs (occasionally 5) which are incubated by both the male and the female for a period of between 20 and 23 days. The young can leave the nest after about 7 days, but the parents continue to feed them for another 6 or 7 weeks. The young fly off around 28 days.

Ecological Role –
The glossy ibis after breeding is a bird that becomes highly nomadic. The northernmost populations are completely migratory and travel on a broad front, for example through the Sahara desert. Those of the Black Sea seem to prefer the Sahel and West Africa to winter, those of the Caspian Sea move to East Africa, the Arabian Peninsula and as far as the Far East of Pakistan and India.
Migratory movements and nesting sites vary according to latitude and the availability of suitable habitats.
In general, the populations of the temperate regions reproduce during the local spring, while the tropical populations nest in conjunction with the rainy season. Nesting often occurs in colonies of mixed species. When it does not nidify, flocks of over 100 individuals can form during migrations and during the winter or dry seasons the species is usually found to forage in small flocks.
Plegadis falcinellus often occasionally settles on trees that may be some distance from wetland feeding areas, at night, in large flocks, along with other species.
Its diet varies according to the season and is very dependent on what is available. Prey includes adult or larval insects such as water beetles, dragonflies, damsels, grasshoppers, crickets, flies and trichoptera, annelids including leeches, molluscs (e.g. snails and mussels), crustaceans (e.g. crabs and crayfish) and occasionally fish, amphibians, lizards, small snakes and nesting birds.
The Plegadis falcinellus is a protected bird in some areas of the world and is one of the species covered by the Agreement on the Conservation of Afro-Eurasian Migratory Waterfowl (AEWA).
This species, according to the IUCN, is threatened by degradation and habitat loss of wetlands through drainage, increased salinity, groundwater extraction and invasion of exotic plants but also by anthropogenic disturbance and illegal killings.