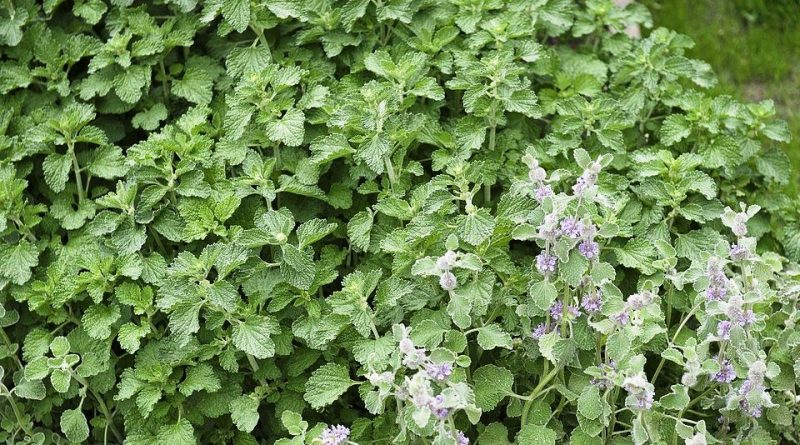 The White Horehound (Marrubium vulgare L., 1753) is a perennial herbaceous species belonging to the Lamiaceae family.

Etymology –
The term Marrubium is the classic Latin name of a herb mentioned by Pliny and Columella, perhaps from the Hebrew marrob amaro, bitter juice (for their Passover the Jews ate bitter herbs called marror or maror); according to De Theis Linnaeus derives this name from a town called Maria Urbs (or Marruvium), that is a city of swamps, located near Lake Fucino (the Romans called Maria the dried places), but the ‘Linné françois’ (Paris, 1809 ) reports ‘de l’hébreu, suc amer’.
The specific vulgar epithet comes from vúlgus vulgo: very common, ordinary due to its widespread use, banal.

Geographic Distribution and Habitat –
Marrubium vulgare is a plant native to the European countries bordering the Mediterranean and present in Eurasia, from Sweden to Great Britain and Portugal, through Turkey and the Caucasus up to Central Asia, western China and then in North Africa – Macaronesia, from Morocco to Libya.
In Italy it is a common species everywhere (missing in the Po Valley). On the Alps it is present in the west and in the center.
Its habitat is that of desolate places and roadsides, uncultivated, ruins, arid pastures (it is a nitrophilous plant). The preferred substrate is calcareous with basic pH, high nutritional values ​​of the soil that must be dry.
Its altitudinal distribution is up to 1200 m above sea level. 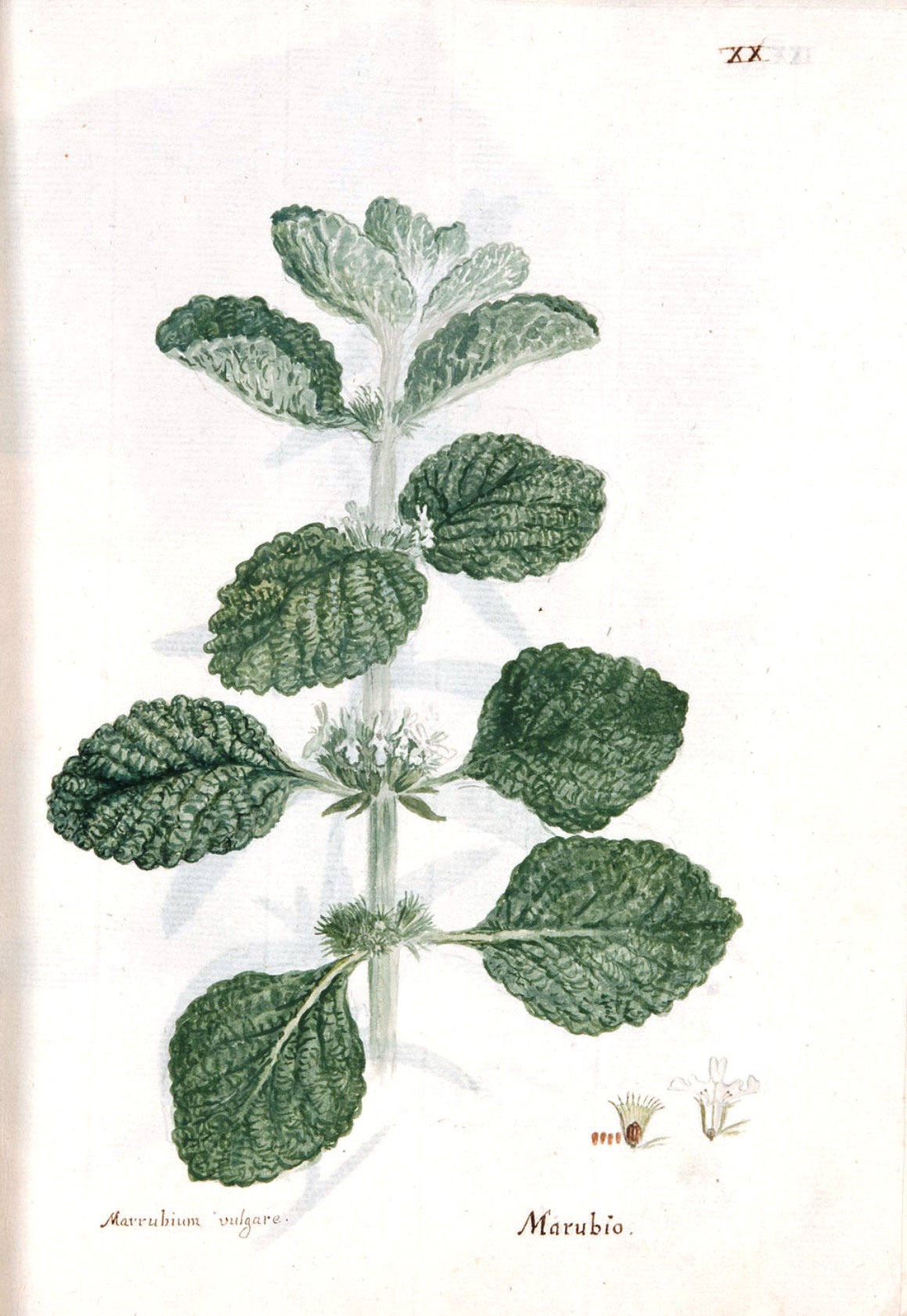 Description –
Marrubium vulgare is an annual or perennial herbaceous plant, very common in uncultivated land, it is thickly hairy and characteristic for its bad smell.
It has a vigorous white-fluffy quadrangular stem, 30-60 cm high.
On the stem there are numerous opposite, oval, crenate and wrinkled leaves.
The flowers are white-pink, with hairy calyx and sepals of 10 shaped lesini teeth which are collected in dense glomeruli at the axil of the leaves to form a spicastro.
The schizocarpic fruit is a microbasarium with 4 small mericarps (nucule) of 1.7-2.1 x 1-1.2 mm, ellipsoid. stingrays, browns.
The plant exhales a strong musky smell; bitter hot acrid taste.

Cultivation –
The White Horehound is a plant that grows spontaneously and is very resistant to cold, able to tolerate temperatures down to about -35 ° C when it is completely dormant.
However, this plant is easy to cultivate in most types of soil even if it blooms better in poor and dry soils but which grows a lot in soils rich in nitrogen.
For its cultivation it is good to choose soils with a neutral to alkaline pH and in a warm and sunny position.
This plant is often grown, in various parts, for commercial use as a medicinal herb.
If the plant is cut after flowering, it will normally produce a second crop of leaves.
The plant can be propagated starting from the seed which is sown in mid-spring or mid-summer until the beginning of autumn. Germination can be slow and uneven. The transplant must then be done in individual pots and placed in the open field when the seedlings are large enough to be handled.
The multiplication can be carried out starting from basal cuttings in late spring by taking the shoots with abundant underground stem when they are about 8 – 10 cm from the ground. These should be placed in individual pots and kept in the shade until they root well. They must then be transplanted in the summer.
Another propagation system is that through tufts. These, especially the larger ones, can be replanted directly into their permanent locations, although it is best to pot the smaller clumps and grow them until they root well. They can then be transplanted in the spring.

Customs and Traditions –
The White Horehound is a plant used since ancient times in the treatment of diseases of the respiratory system. Over the centuries until today, Horehound has been used in particular as a febrifuge and modifier of the respiratory mucosa.
Horehound was the typical purifying plant of popular Provençal and Occitan therapy. In fact, the plant was part of the “five bitter herbs” that the Jews took in preparation for Easter: it symbolized the bitter slavery in Egypt.
Fresh leaves have a pronounced musky smell, although this is lost once the plant is dried.
The plant also has edible uses as the leaves are used as a condiment. They are bitter and spicy, they are sometimes used to flavor herbal beer or liqueurs.
Horehound beer is a fairly well-known drink made from the leaves of this plant. A mild and pleasantly flavored tea is made from fresh or dried leaves and is a favorite cough remedy.
However, Marrubium vulgare is widely used in popular herbal medicine as a home remedy for coughs, colds, breathing difficulties, etc.
This herb stimulates the secretion of a more fluid mucosa, which is readily eliminated by coughing.
The leaves and young flower stems are antiseptic, antispasmodic, cholagogue, diaphoretic, digestive, diuretic, emmenagogue, strongly expectorant, hepatic, stimulant and tonic.
It is an expectorant and tonic plant that can be safely used by children as well as adults.
It is often made into a syrup or candy to mask its very bitter taste, but it can also be taken as a tea.
As a bitter tonic, it increases appetite and supports stomach function.
It can also act to normalize the heart rhythm.
The root was used, especially in the past, as a remedy for the bite of rattlesnakes, it is used in equal parts with Plantago lanceolata or P. major.
The main components are diterpenes, such as the marrubin lactone; and to a lesser extent alcohols, pyrrolidine alkaloids, flavonoids (apigenin, luteolin, quercetin), small quantities of essential oil, saponins, pectin and mucilage, choline, tannins and mineral salts (calcium, potassium and iron).
This plant also contains ethereal oils, glycosides, choline and tannin.
Horehound has choleretic and bitter properties. The main choleretic component is marrubinic acid (hydrolysis product of marrubin), while marrubin (which does not possess choleretic properties) stimulates bronchial secretion (expectorant action); the saponosides then assist this action by thinning the mucus and promoting the elimination of catarrhs ​​without drying the mucous membranes.
It also has antiarrhythmic properties (although at high doses it can cause arrhythmias).
This medicinal product is effective in lack of appetite, stomach pain and chronic dysentery.
This plant is also a febrifuge so it becomes a very important component in the formulation of winter herbal teas. In the past it was used in intermittent fevers resistant to quinine treatment.
The bechic virtues are the most interesting: in chronic bronchitis, rebellious cough, asthma, pneumonia and chronic pleurisy.
However, Marrubium vulgare has other uses such as agroforestry.
It is also a good plant to associate with tomatoes as these solanaceae produce for a longer period giving a higher yield.
Among other uses, it should be remembered that an essential oil is obtained from the plant which is used as a flavoring in liqueurs.
It is also a fly-repelling plant and an extract of the plant is used as an ingredient in commercial cosmetic preparations as a skin conditioner and soothing agent.
An extract from the flowering stems is used as an ingredient in commercial cosmetic preparations as a masking agent.
Finally, in the field of gardening this species has a certain interest for its ornamental value.

Preparation Method –
The White Horehound is a plant with food and medicinal uses. The leaves and flowering tops of this plant are used.
The plant is harvested as soon as it has flowered and can be used fresh or dried.
For medicinal purposes, both 2-3% infusion is used, 2-3 cups a day in asthma, dry cough and catarrhs; both wine (enolith), obtained by macerating 60 g of dry plant in a liter of white wine for 15 days. Once filtered, 2-3 shots before eating, strengthens the stomach, frees the liver and spleen from traffic jams; regulates menstruation.
In the kitchen, on the other hand, the leaves are used as a condiment. The taste is bitter and spicy and are sometimes used to flavor beer. While an essential oil obtained from the plant is used in herbal liqueurs.