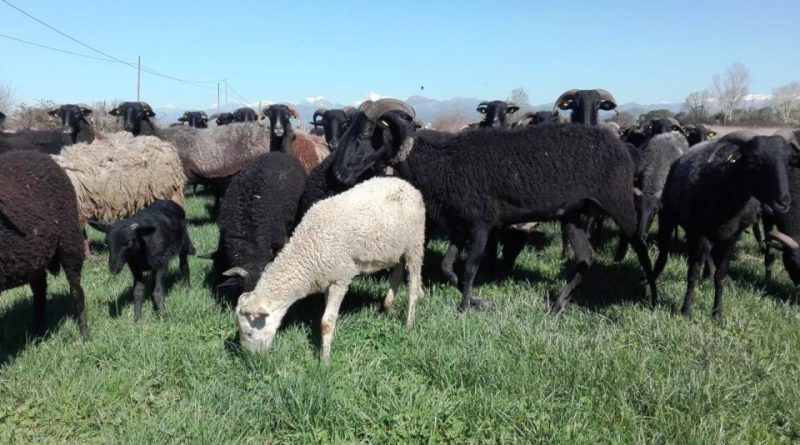 The Massese or Fornese is an Italian sheep breed (Ovis aries Linnaeus, 1758) originally from the province of Massa, in Tuscany, with a main aptitude for milk production.

Geographic and Area Distribution –
The Massese sheep breed is an indigenous Italian breed originally from Massa (Tuscany), in the Forno valley (Apuane, Massa Carrara province). It is currently bred mainly in Tuscany, Emilia, Liguria and Umbria.

Origins and History –
The Massese is a Tuscan sheep breed which, as mentioned, comes from the Forno valley, in the Apuan Alps, in the province of Massa Carrara, and has a common origin with other races of the Apennine stock originating from the Tuscan-Emilian Apennines, once considered to belong to a single large sheep population with morphological characteristics that are not always uniform. To define them, different names were used that depended on the place of breeding rather than on appearance. The Massese sheep population was already distinguished by its good dairy vocation and it was common practice for the shepherds of the areas adjacent to its area of ​​origin and breeding to use the Massesi rams to improve the milk production of their flocks. The selection of Massese began in the last century to enhance the qualities of milk production, without underestimating the production of meat and at the same time maintaining the qualities of robustness and rusticity. It is an extremely popular breed: from the area of ​​origin it has in fact spread throughout Tuscany and subsequently in other regions. Subsequently, the Herd Book of the breed was established, which is subjected to functional checks by the Italian Association of Breeders. The breed has a herd in selection at the Ovine Growing Genetic Center of the National Association of Pastoralism in Asciano (SI).
At the end of the last century, the total population was 180,000, 66% in Tuscany and 27% in Emilia-Romagna. In 2006 the leaders were 55,000.
Currently, as for other indigenous breeds, the Massese breed is in sharp decline: with a consistency, developed as of 31/12/2019, where there are 106 herds registered in the Herd Book, with 326 rams and 7890 sheep.
Future prospects include obtaining a high-production dairy breed, adaptable to different types of breeding. There are no particular breeding problems but the presence of Sardinian sheep in its range has conditioned its expansion.

Morphology –
The Massese is a medium-sized sheep, with the male being about 85 cm tall at the withers and weighing 90 kg while the female is 77 cm tall for a weight of 65 kg.
Being a dairy breed, it has morphological characteristics suitable for this attitude and the animal in full lactation must not have superfluous meat; the rib bones must be wide and well spaced and the general appearance must show vigor.
It has an open or semi-open fleece, with conical tufts with rather smooth short wool, lead gray in color and with a less dark apical part in the females and almost black in the males. Black, brown and light gray coats are accepted. Not tolerated: depigmentation, especially if localized in the palate, cheeks, natural openings and scrotum; whitish or reddish fleece; white tail tip; and spread of wool to the head, limbs and belly.
The head is light, proportionate, vigorous, distinct, with an almost straight upper profile in the females while the male has a slightly ram profile; the eyes are lively and rather prominent, and the mobile ears, not too long and thin; the jaws and the muzzle are wide and the nostrils wide; the horns, light and black, are always present and in the male they are serrated and firmly implanted with a spiral trend with apex facing anteriorly while in the females the horns are light and slender; the attack of the horns must preferably be close together. In addition, the head must not have wool. The absence of horns is not allowed.
The neck must be rather elongated and thin, light and with little fleece.
The shoulders must be fused with the neck and the shoulder blades must adhere perfectly to the dorsal vertebrae. The chest is wide and the width helps to increase the thoracic capacity. The back-lumbar line must be long and straight. The croup must be well attached to the loins, broad and slightly sloping backwards.
The female has a breast which must be well attached under the belly in the front part; posteriorly, it must have a very broad attachment, in line with the buttocks or slightly protruding, and must never go beyond the hocks in depth. Seen from the rear, the breast must have a median sulcus, suspensory link, which bears all the weight of the breast to ensure its duration. The breast, poor in connective and adipose tissue, has an evident venous network; the skin is very fine and elastic, without hair. The nipples must be of the right size, set low.
It has perfect abutments to support strong feet, with the rear ones that must be well spaced, upright, with strong bones; the hock is strong and lean.

Productive attitude –
The Massese sheep breed is a sheep with mainly an aptitude for milk production, with an average of 120/150 kg per year.
The production data are, in summary, for the average milk production (without the feed):
– Primipare lt. 120;
– Pluripare lt. 150;
For the production of meat we have:
– males 65 kg;
– females 45 kg;
from this sheep we also get a fair production of wool which is attested:
– Rams Kg. 2,2;
– Sheep Kg. 1,5.
However, the main attitude of the Massese breed is the dairy one.
Milk is composed on average of 6.9% fat and 6.0% protein: it is mainly used for making pecorino cheese, eaten fresh or after a short maturation, which is in great demand on the market.
Meat production comes mainly from suckling lambs, slaughtered at an age of about 20-25 days with a weight of 10-15 kg. The weight of the lambs at birth is 4-4.5 kg, at 30 days it is 12.5-13.5 kg and at 1 year it is 45-65 kg (females and males respectively). The meat has organoleptic characteristics appreciated by the consumer.
Furthermore, the Massese sheep is endowed with good fecundity and discreet prolificacy. Usually 3 births are obtained every 2 years, with a twinning rate of about 20%. The average age at first birth is around 15-18 months. The greatest concentration of the births occurs in the autumn and spring seasons, although the majority of females have estral cycles during a good part of the year.
As for the farming system, the Massese is a predominantly sedentary sheep: natural pasture and additions consisting mainly of hay and a small part of concentrates. The consistency of the crude oils varies according to the technical equipment of the individual companies.
As regards genetic improvement, a selection of Massese breed breeders is underway which is guaranteed by the core breeding present at the genetic center of the National Association of Pastoralism, in Asciano (SI). This has as its objective the selection of subjects having the characteristics of the breed foreseen by the Technical Regulations, with an aptitude for high and constant production of milk with high levels of fats and proteins. The breeding consists of animals of high genetic value highly resistant to Scrapie. Every year, young animals are put on sale in excess of the internal needs of the Center or whose presence is no longer provided for by the breed selection protocol.
In addition, the selection index for the breeders of the Massese sheep breed is a Blup Animal model estimate for several characters: milk, fat and protein percentages, and somatic cells (linear score). This has the advantage of simultaneously indexing the reproducers of both sexes; the result obtained from the processing is not the true genetic value of the animals but its estimate, and as such is subject to variations. This methodology allows to obtain the estimate of the reproductive value since it takes into account both the genetic value of the sheep, with which the rams were mated, and the effects of the selection; finally, it processes the accuracy using all known relationships.