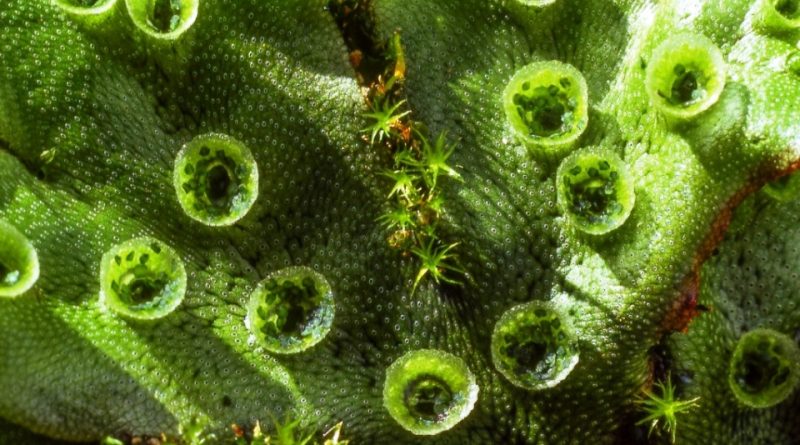 Common liverwort or umbrella liverwort (Marchantia polymorpha L.) is a liverwort belonging to the Marchantiaceae family.

Etymology –
The term Marchantia of the genus was dedicated by Linnaeus to the French botanist Nicholas Marchant (? -1678) who was director of the Botanical Garden of Blois and later of the Jardin du Roi in Paris, the first botanist admitted to the Academy of Sciences, in 1666. Second De Theis and the Verzeichnis Eponymischer Pflanzennamen the genus was published by Linnaeus, but the name would have been defined by Jean Marchant in honor of his father.
The specific epithet polymorpha comes from the Greek prefix πολυ- poly- very, many and from μορφή morphé forma: which assumes many different forms.

Geographic Distribution and Habitat –
Marchantia polymorpha is a cosmopolitan species with a wide distribution worldwide from tropical to arctic climates.
Its habitat is that of humid soils and rocks in humid environments such as the banks of streams and pools, peat bogs, swamps and loose dunes. 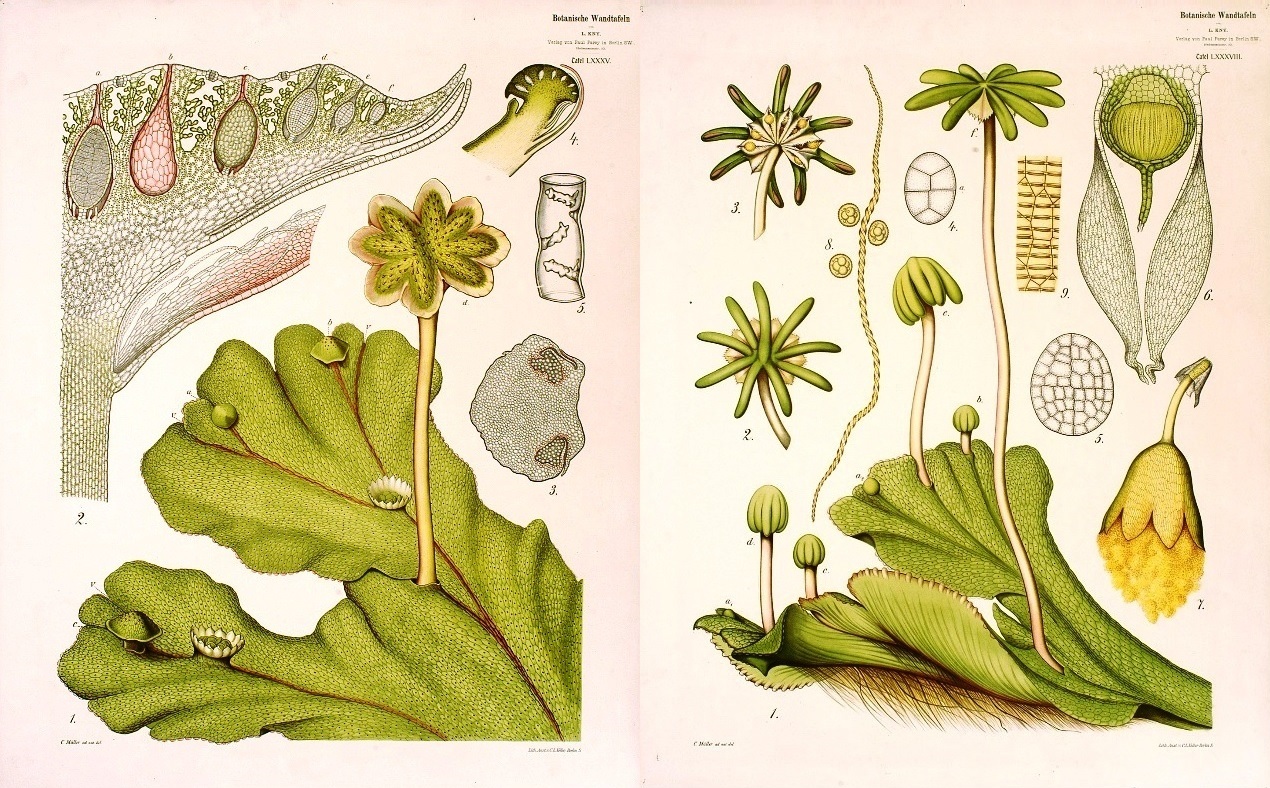 Description –
Marchantia polymorpha is a hepatic, that is a non-vascular plant, therefore similar to mosses, very ancient and equipped with a primitive reproductive system. In fact it does not have phloem and xylem like ferns, conifers and flowering plants to carry water, food and minerals through the plant.
This plant forms a rosette of flattened thalli with forked branches. The thalli grow up to 10 cm in length with a width of up to 2 cm. It is usually green in color, but older plants can turn brown or purplish. The upper surface is characterized by polygonal signs.
The underside is covered with many root-like rhizoids that allow the plant to anchor itself to the ground.
Plants produce umbrella-like reproductive structures known as gametophores. The gametophores of female plants consist of a stem with star-shaped rays at the top. These contain archegonia, the organs that produce eggs. Male gametophores are surmounted by a flattened disc containing sperm-producing antheridia.

Cultivation –
Marchantia polymorpha reproduces asexually from buds produced inside cups. The buds are lentil-shaped and are released by water droplets. Plants produced in this way can expand significantly.
In fact, it often forms large colonies on the surface on which it grows.
This species embraces the substrate on which it grows, usually moist soil or wet rocks.
It grows mainly on humid soils, generally neutral or basic or on wet rock, such as along a perennial stream. Occasionally it appears on mineral soils in depressions or in the shade of fallen trunks following forest fires.

Customs and Traditions –
Marchantia polymorpha is a plant species that has generated a long history of interest as a source of herbal remedies. Aristotle and Theophrastus refer to it in ancient Greek herbal literature. The plant is supposed to resemble a liver, therefore, applying the “doctrine of signatures”, it has been used to treat liver disease in both Europe and China (Shuster, 1966). Jantwal et al., (2019) list a wide range of human pharmacological applications including: treatments for boils and abscesses and as antipyretic, antibacterial, antifungal, diuretic, vasorelaxant, muscle relaxant, cardiotonic, antioxidant, antitripanosomal and antiviral agents.
Marchantin, classified as ethers, present in this liver, have been studied as potential anticancer drugs: Marchantin A, induces apoptosis in human breast cancer cells (Huang et al., 2010), as well as Marchantin M in human breast cancer cells. prostate cancer (Jiang, 2013), while Marchantin C acts on lung cancer cells (Zhang et al., 2019). Although most of this research is conducted in China, there is a ready market for alternative cancer remedies in the West.
Furthermore, its strong fungicidal ability has been used successfully in the treatment of skin and nail fungus.
Among other uses, we report that the United States Department of Agriculture has studied Marchantia polymorpha for its use in the rehabilitation of disturbed sites due to its ability to tolerate high concentrations of lead in the soil, along with other heavy metals. In turn, M. polymorpha colonies can be an indication that a site has high concentrations of heavy metals, especially when found in dense mats with few other vegetative species present.
An important advantage of M. polymorpha is that it is often the first vegetation to appear after a large fire.
After invading the burned area, M. polymorpha grows rapidly, sometimes covering the entire site. This is important to prevent soil erosion that occurs frequently after severe fires, causing significant and long-term environmental damage. In addition to this, M. polymorpha renews the humus in the burnt soil and over time elevates the quality of the soil to a point where more vegetation can be established.

Preparation Method –
Marchantia polymorpha has been used since ancient times to remedy liver ailments due to its perceived similarities to the shape and texture of animal livers, according to the signature doctrine.
It is currently used, with various preparations, also in homeopathic medicine.