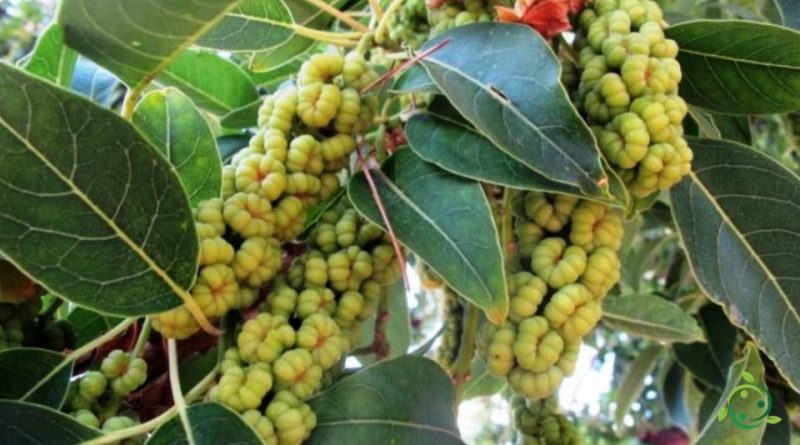 The Ombú  (Phytolacca dioica L.) is an evergreen tree of the Phytolaccaceae family native to the pampas of South America but today widespread throughout the Mediterranean region.
This plant reaches 20 m in height and is characterized by gnarled roots emerging from the ground near the stem and by a short and stocky trunk, divided into several branches. In Italy it blooms between spring and summer.
Phytolacca dioica is a dioecious plant with reproductive structures consisting of flowers produced in pedunculated, often pendulous racemes; the male ones have a greenish-white calyx and up to 30 stamens; the female ones have a larger greenish calyx and a showy segmented ovary.
The characteristic-looking fruits are small clusters of black berries.

Cultivation –
Ombú is a plant that can only be grown in mild areas, with a winter minimum of 5 ° C, as it suffers from harsh temperatures and even late frosts; in the presence of frosts, parts of the plant may dry out.
For this reason in Europe it is used as an ornamental plant in areas with a Mediterranean climate.
Outside this range, it can be grown in pots (with a minimum diameter of 40 cm per plant 80 cm high) to be placed in a cold veranda or greenhouse during the winter.
For the cultivation of this plant it is necessary to choose, if possible, loose soils (therefore basically sandy or at the limit of medium texture), deep and well drained. However, by ensuring good drainage, the plant can grow in any soil as long as no waterlogging occurs.
The area where the Phytolacca dioica should be cultivated must be possibly sunny or, at best, partially shaded. Plants grown in shady areas grow poorly and bloom little or not at all.
When planting the Phytolacca it is recommended to place mature organic fertilizer (manure or earthworm humus) in the hole that houses the plant, to be redistributed every early spring to the collar of the plant, covering it.
The plant should be irrigated during the first years of life from April onwards to then use the water aid, in mature plants, only in case of long periods of drought.
It should also be remembered that it is a fast-growing plant.
Remember that since its sap is poisonous it is not suitable for being placed near cattle pastures and is immune to grasshoppers and other parasites. For similar reasons, the leaves are sometimes used as a laxative or purgative.

Uses –
Ombú is a plant that is used in the mild areas of Europe in parks and road trees.
It should also be remembered that numerous species of the Phytolacca genus are plants used for medicinal purposes because they contain powerful inflammatory and proteins that have an antiviral action.
Furthermore, this plant, being closely related to the herbaceous plants (from which it derives), its trunk is made up of an anomalous thickening of the stem rather than real wood. As a result, the Phytolacca dioica grows quickly but its wood is rather soft and spongy, so much so that it can be cut with a knife. These properties have led to it being used in bonsai art, as it is easily manipulated to create the desired effect.
It is a symbol of Uruguay and Argentina. Its canopy is quite distinguishable from afar by its width and offers protection and shelter from the sun and rain.