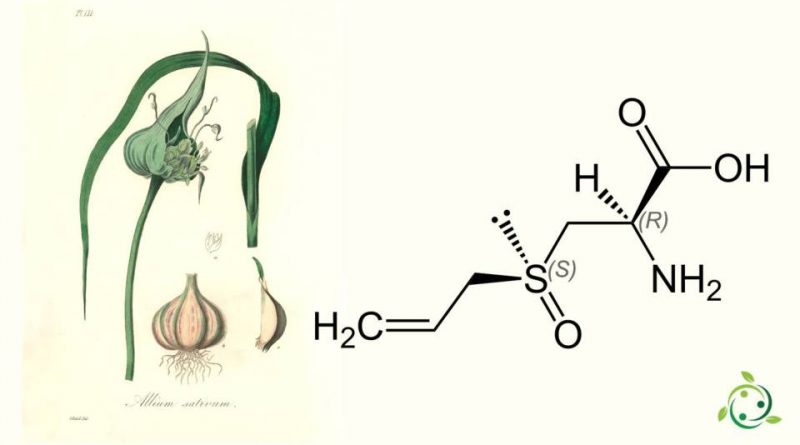 Alliin, whose term in the official IUPAC nomenclature is. S-3- (2-Propen 1-sulfinyl) L-alanine.
The proteinogen has a brute or molecular formula: C6H11NO3S and is a non-proteinogenic amino acid and a natural sulfoxide present, together with cycloalliin, isoalliin and methiin, in fresh garlic.
However, alliin is not the substance that causes the strong smell that is felt when you crush or cut a clove from the garlic bulb.
The mechanism starts when the bulb is broken, crushed, crushed, etc. as the alliin that is released interacts with the enzyme present in the adjacent cell vacuoles, namely the alinase.
This enzyme, in contact with alliin, results in, by hydrolysis, intermediates (especially sulfenic acids, such as allylsulfenic acid), which rapidly self-condense to create different thiosulfates.
Alliin was first described by Swiss chemists Arthur Stoll and Ewald Seebeck in 1950, and is in fact a totally odorless and tasteless amino acid, at least until the garlic is actually cut or crushed.

The first synthesis reported, by Stoll and Seebeck in 1951, begins with the alkylation of L-cysteine ​​with allyl bromide to form deoxyalliin. Oxidation of this sulfide with hydrogen peroxide provides both L-alliin diastereomers, which differ in the orientation of the oxygen atom on the sulfur stereocenter.
A more recent route was reported by Koch and Keusgen in 1998; this allows for stereospecific oxidation using conditions similar to Sharpless asymmetric epoxidation. The chiral catalyst is produced from diethyl tartrate and titanium isopropoxide.
The biosynthesis of alliin originates from the amino acid cysteine.
Furthermore, the compound is not very stable, and to prevent oxidation it must be kept at 4 ° C.